Dennis Broe gives us his Best of the Rest from Cannes 2018.

All the other critics have gone home but I’m still on the Croisette, the Cannes Boardwalk, sweeping up after them. This week I’ll finish my Cannes reporting with a look at the best of the three other competitions: Directors Fortnight which generally features newer directors; Un Certain Regard for more established directors; and Critic’s Week, generally for directors new to the festival. These are films that will be released throughout the year that can easily get lost in the Hollywood and American Independent glut. Keep an eye out for them because though deserving they are likely to be the films that if they get reviewed at all get stuck on, for example, The New York Times page of eight reviews.

In general the Director’s Fortnight, not officially a part of the Festival and begun the year after Godard and Truffaut closed Cannes in 1968, tries to be more of a breath of fresh air. Its choices tend as much toward the social as the aesthetic, whereas Un Certain Regard is more staunchly and purely aesthetic and its choices are sometimes harder to swallow or sit through.

This year the Directors Fortnight had a distinct Latin and South American flavor as did the original program in 1969, awash with the aesthetics and social consciousness of Latin American revolution. The 2018 films tended to center on indigenous peoples and many of the better films at the festival were about the damage being done to native customs more in line with nature.

Before we go to that, I do need to add that there was a calling out of the critics as well at the festival in this year of MeToo. It occurred around the screening of Girls of the Sun, a film about a squadron of Kurdish female fighters engaged against ISIS. This was the film where 82 women mounted the steps of the Palais to urge the industry to employ more women. The film was directed by directed one of only three female directors in any area of the festival and the reviews afterwards, by mostly male critics, roundly panned it. Several of the women in attendance then denounced the reviews as indicating that the ranks of reviewers needed to open up also.

This reminds me of moments in both comedy and rock and roll when women needed to call attention to the fact that their humor and ways of making music was different rather than not funny or not listenable. Female comedians and female bands have both gained in attention and both fields have been the better for it. Michelle Wolf is currently perhaps not only the fastest rising but also the funniest and most politically astute practitioner of contemporary comedy. Hopefully next year there will a swelling in the ranks of female reviewers as well.

Here are four of the best films outside the main competition followed by a review of some of the others.

Woman at War – This onscreen extension of MeToo about an Earth Mother battling global energy companies in Iceland opens with a razzle-dazzle sequence with this lone warrior with bow and arrow bringing down a power plant. Hala is a choir teacher by day but an environmental activist by night attempting to keep Rio Tinto and Chinese developers out of Iceland’s rural highlands, one of the last bastions of nature in Europe. This is the real Wonder Woman who battles for justice for the world’s climate victims. The film’s concluding segment has Hala visiting the Ukraine to adopt a girl orphaned by a war that is seen as having unleashed untold natural devastation on that country, a war provoked by U.S. and NATO aggression in the region. Aiding her in her quest are on-screen musicians and Ukrainian folk dancers whose music is a cultural echo of the natural life Hala is sworn to protect. 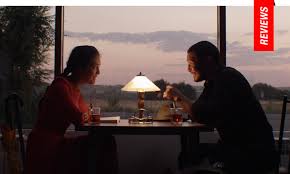 The Gentle Indifference of the World – Bonny and Clyde in Kazakhstan in a film whose title is a quote from Camus. The title is facetious. The world the film describes is far from gentle and, rather than indifferent, it is cruel, as a young girl is sent by her mother from the country to the city to be betrothed to a rich man to settle the family’s debts. She is accompanied by a village compatriot who loves her and becomes a kind of guardian angel. What they encounter is a world where businessmen and gangsters look and act alike. After multiple deceptions, the duo takes to the road in the film’s strongest sequence in a desperate bid for freedom that both recalls and outdoes the final scene of Bonny and Clyde. This is a bitter but enchanting look at the region and the coming of neoliberalism to it. 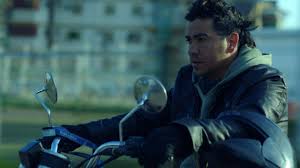 The Snatch Thief – This film noir from Argentina about the motorcycle getaway driver of a purse snatching duo, which might have been better titled The Motorcycle Thief, is a reminder that Argentina has an expert history as a creator of crime films with doomed heroes from the 1940s and ‘50s. The thieves drag an old lady with them as they make off with her pocketbook which disturbs the driver Miguel who then slowly insinuates his way into the victim’s life with the two becoming intertwined. The film features shots framed in the 1940s Hollywood style with the thief in foreground watching Miguel’s righteous father in the background bidding for the affection of his son, “choker close-ups” of Miguel facing off with his partner who wants him to continue his life of crime, and a sense of foreboding affecting the lead as he attempts forgiveness in a perilous way. The film with its low-caste characters is also a look at the other side of a suffering Argentina that its right-wing market-oriented government is bent on denying. 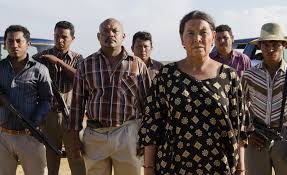 Birds of Passage – Yes this is Scarface in Columbia with its tale of the rise and fall of a drug dealer in the North of that country in the land of the Wayuu Indians, but it is also so much more. Directed by the team that created The Embrace of the Serpent, about the encounter of a German “explorer” and the last of an Indian tribe, this follow-up is about a similar theme only writ larger. It details the 20-year history of the tribe’s involvement in selling and shipping marijuana and what it adds to the typical gangster film is an acute awareness of the ways the greed, violence and customs of the West penetrate and ultimately destroy not only the gangster capo but the tribe as well, as one by one the customs that had allowed it to survive are surrendered to a substitute thirst for material goods. We watch collective pride be replaced by vengeance in a way that deepens the gangster genre while delivering all the expectations of that genre based on the lead dealer’s rise and fall. This is Narcos from the Columbian perspective which both quotes that series--in a parallel scene where the police stop the drug runners not to imprison them but to make sure they get their cut—while also outdoing the Netflix vehicle in its inner understanding of its subjects.

Two other films also dealt with Latin American turmoil. Los Silencios, The Silences, is a kind of passionate plea to end the war in Columbia between the government and right-wing paramilitaries and the revolutionary group The FARC. The film is actually many movies in one, about a refugee family fleeing the war trying to get access to Brazil, about the remote island they arrive at somewhere between Peru, Columbia and Brazil at the gentrifying moment that it is about to be overrun by a casino, as well as a coming of age film of a young girl, perhaps the strongest moments of the film. The Brazilian director Biatriz Seigner appeared before the film appealing to the audience to take a stand against the false imprisoning of Lula, the Workers Party Candidate, who is, even from his jail cell, leading the presidential polls. She also said that Kleber Mendoca Filho, the director of Aquarius, a film with Sonia Braga, who at Cannes in 2016 had called attention to an earlier legislative coup against then president Dilma Rousseff, was forced by the neoliberal Temer government to give back the grant he had received as punishment for calling attention to the coup.

Elsewhere The Dead and Others follows a young Amazonian Indian family while a heavy air of loss by the father for his father hangs over him and threatens to overcome him. The family goes to the nearby town to work to raise money for the burial and there is a heartbreaking scene where the father for his own reasons at the moment refuses to return with his wife and son. The recounting of the attempt to live in their own way and the tenderness of the family is excellent but the constant tarrying with the dark side of the lead character feels like an extraneous western imposition.

Another kind of indigenous wandering takes place in Tenet or The Charge, a film from Serbia that recalls the 1999 NATO bombing of the country and that opens with a display of shock and awe as the skies are ablaze above a lone truck gliding though the night. The film focuses on its driver who cannot listen to the radio because NATO satellites have jammed the signal and who risks his life on the road in a way that recalls the truck drivers’ hauling dynamite in Wages of Fear. There is an air of sadness about the film for the breakup of Yugoslavia and particularly the Serb partisans’ opposition to the Nazis that the farce of the NATO invasion in the Kosovo war only mocks.

Finally there were two horror films that left their imprint on the festival. The better of these was Borders from Sweden written by the author of Let the Right One In, a socially critical vampire film. Borders introduces a new type of monster with its own carefully calibrated rules while focusing on a female customs sniffer with a face not even a mother could love, which is one of the questions of the film, and an apparently missing tail. Much of the film is absorbing as it questions our tolerance for the other, but finally it succumbs to what it is questioning with one of the monsters seen ultimately as terrifying other while the second moves to become a more liberal part of the society, that is, becomes acceptable because she tames or sheds her otherness.

Die, Monster, Die on the other hand, is an Argentine film without the soul of The Snatch Thief. Its overflowing of bodily fluids from all cavities is simply an example of Art Splatter, as Noel Carroll once described more aesthetic examples of the genre as Art Horror. It adds up to little and in its gross out effects make it seem more like a Master’s Degree highlight reel designed to get the director Hollywood recognition once he jettisons the pretentious existential overlay of who is and isn’t a monster. Oh well, there’s room at Cannes for blatant careerism also.

This is Bro on the World Film Beat Breaking Glass and winding up my coverage of Cannes 2018.

Dennis Broe is a culture critic whose latest work is Birth of the Binge: Serial TV and The End of Leisure. His art and architecture criticism appear on Arts Express on the Pacifica Network in the US, on Breaking Glass on Art District Radio in Paris and at Culture Matters and People’s World.