Annette Skade presents the poetry of Anne Carson, and a brief biography

In Anne Carson’s series of poems, “The Glass Essay”, the speaker is channelling Emily Brontё: “my lonely life around me like a moor”, and the narrative of lost love, analysis and estrangement is woven through with references to Wuthering Heights. In one of the poems, “Whacher”, Carson uses the spelling from Brontё’s own notebooks to list all the things Emily “whaches”, among them the wind on the moor, God and humans, stars and “actual weather”:

Like most writers, Carson too is a “Whacher”, and her readers will find all the things she lists for Emily within Carson’s poetry. There are extremes of weather, Gods, humans and monsters, mythic figures such as Herakles and Antigone, and writers and characters from the past who break through the confines of time to crash into the present in her work. Her writing lifts the lid on “the poor core of the world”, and what it shows often has the quality of magma: unstable, eruptible, violent. Many of her characters struggle to make sense of the world. Geryon, the winged half monster, half human who we first meet in adolescence in the novel in verse, Autobiography of Red, comes out from the hoodie which covers his face and hides his wings, to take photographs - another way of watching: “He was seated at the kitchen table/ with his camera in front of his face, adjusting the focus. He did not answer./ He had recently relinquished speech.”  He thinks about listening, and magma:

What is it like to be a woman
listening in the dark? Black mantle of silence stretches between them
like geothermal pressure.
Ascent of the rapist up the stairs seems as slow as lava.

There is no answer to the question. Only the woman listening to that slow, threatening progress up the stairs can know. Geryon’s thoughts rise just before sleep, after “a fragment of human voice tore itself out and came past”, but no one is telling. Carson listens hard, but a lot of the time what she hears is silence. She tells us what people say across time, the words of Sappho, Plato, Keats, the Brontёs, Kafka and others, but many of the people she quotes are men. The further back you go, the more the silence gathers, and Carson calls attention to this in her prose piece “The Gender of Sound”: “Putting a door on the female mouth has been an important project of patriarchal culture from antiquity to the present day”. Carson’s poetry shows a world where women’s words are often suppressed or misrepresented. In the collection Men in the Off Hours, Sappho and Antigone become victims of the soundbite, and in the poem TV Men: Antigone (Scripts 1 and 2) the words of the producers are a nugget of smug complacency:

[… we had to cut Antigone’s script from 42 seconds to 7: substantial changes of wording were involved but we felt we got her “take” right.]

Recently, perhaps because of her involvement with the Human Rights Organisation,  Reprieve, Carson has been writing about specific human rights issues. In the poem “Clive’s Song”, published in The New Yorker in April 2017, Clive is the lawyer Clive Stafford Smith: “now striving for people on death row or places like Gitmo/ for thirty-five years”. Carson, her partner Robert Currie and Stafford Smith are having a conversation in an American diner, but Stafford Smith’s client is silent, locked away in Guantanamo in a situation which defies logic. (He)

Has been cleared for release
and also informed
he will never leave.

Carson has written about the case of Faisal Bin Ali Jaber, a Reprieve client, whose brother, Salem, and nephew, Waleed, were killed by a U.S. drone strike in Yemen in 2012, when they were attending a wedding. A U.S. drone fired four Hellfire missiles at them. Carson’s prose poem “Fate, Federal Court, Moon”, which appeared in the LRB in 2017, highlights the subsequent case in the US courts, which Bin Ali Jaber and Reprieve battled to get, and where the complaint was deemed to be “nonjusticiable”, in other words it cannot be heard by a court of law. 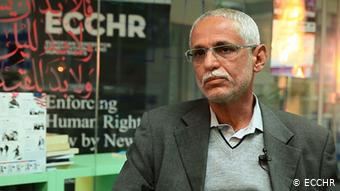 No justice, literally. The “fate” of the title is used with extreme irony in the poem, and lands like a blow as it is repeated throughout:

The meaning of the word “Fate” is destabilised as Carson uses it in unusual contexts: “The fate of our phones”, “The fate of the pearls worn by Judge Dillard.” They see the moon in the title as they drive to the hearing. They have come to listen, but the lawyers are speaking to the judges, not to them, and it is hard to hear. A Hearing which you can’t hear. Some words do have lasting impact, however, as testament to the violence often contained in legal frameworks:

In 2016, prior to the case, Carson, Currie and Bin Ali Jaber collaborated on a performance piece, Lecture on the History of Skywriting. Carson speaks in the voice of the Sky, who is reading from his diaries. The whole of time is just seven days long, but any resemblance to the Bible ends there. At one point, Currie interviews the Sky, and Bin Ali Jaber translates perhaps the most powerful section into Arabic. This section traces warfare from Achilles and Hector looking into each other’s eyes on the battlefield to the present day, where “a soldier in Nevada can push a button and make five people in Pakistan burst into flames”. This was originally performed in conjunction with artworks on Yemen, and an interview with Bin Ali Jaber and a member of Reprieve. In the long poem, the specific drone strike in Yemen is not mentioned, but the taint of it seeps through the whole forty five minute performance.

It starts with the world’s molten and explosive beginnings, and there are daily entries in the diary which often feature heat of various kinds: flames and desire. The Sky has sex with Alkmene, who quickly returns to her husband down the hall, but who gives birth to the half-immortal Herakles. They also tell of love, and grief. The Sky quotes Christopher Hitchens saying that having a child is “like your own heart walking around in another body”. To become fully immortal, Herakles has to burn. The Sky exists outside time, and so has to watch “My own heart walking towards his death”, and, just as someone who suffers the trauma of seeing the death of a loved one in a drone strike might relive it repeatedly, the Sky must engage in the worst kind of watching:

I have to watch my most beloved child burn to death at all times.

The lines for Saturday are first spoken in Arabic by Faisal Bin Ali Jaber, followed by Carson reading in English. We are told: “A history of warfare is mostly a history of stuff bringing death through the air.” A list of the means to bring death follows, ranging from arrows, bullets and bombs, to lethal drones. The “notes” for Saturday finish with Carson’s edgy, clear, carefully neutral voice saying:

That is who we are. The “poor core of the world” is a mix of desire, love, grief and destruction, in Wuthering Heights and in Anne Carson’s poetry. This article gives a glimpse down into that core. There is so much to engage with in Anne Carson’s work: Nox which works through her grief at the death of her brother; love, betrayal and jealousy in The Beauty of the Husband; the “Short Talks” on anything from reading to “defloration” in Plainwater;  the beauty of “actual weather”. There are also moments of peace, like this childhood memory of the Canadian landscape in the pamphlet “Uncle Falling” in Float from 2016:

The lake was a masterpiece. I loved it like a per-
son. It had birch trees slipping themselves silver in
the wind along the shore silver in itself and situa-
tions of water lilies both sides of the dock tangling
to a swimmer. I swam all day.

Anne Carson was born in Toronto, Ontario, Canada in 1950. She is a trained classicist and her PhD dissertation became the book Eros the Bittersweet, published in 1986. Her poetry was published in various magazines in the late eighties, but she really came prominence as a poet in 1995 with the publication of the books Plainwater, and Glass, Irony and God. Her fourth book, Autobiography of Red: A Novel in Verse, published in 1998, had sold 25,000 copies within two years. Recent works are Antigonick from 2012, a retake on Sophocles’ Antigone, and the series of pamphlets, Float (2016) on subjects ranging from dementia, in “Uncle Falling”, to current U.S. immigration policy in “Zeusbits”. She has won many awards, including the TS Eliot prize for The Beauty of the Husband in 2000, and the Griffin Poetry Prize in 2001 and 2014.

Annette Skade is from Manchester and now lives in Ireland.
She has just completed a PhD on the poetry of Anne Carson at Dublin
City University, and her poetry has been published in Ireland, the U.K., the U.S. and Australia.