Have a slow look at the drawing shown above. Is it not an image that captures our eye, engages our intelligence, and feeds our imagination, springing as it does from the artist’s own eye and intelligence and imagination? By means of his long-practised craft, the artist transports us into a Tale of Two Fields, of Two Bladed Implements, of Two Adversaries representing Two Classes, and of Two Ways of Life and Death. We see more than an illustrative drawing. We see an emblem, transcending the historic past in which it is set, and speaking of and to all times. This emblem is, I would claim, a gift to be treasured, likely to stick in our memories. It is beautifully stark in its overall impact, and subtle in its detail. Look, for example, at which blade overlaps which; and look at the two hands holding them. One is gauntleted, implying rank. The other is bare, implying the opposite.

The artist who drew our “Sword & Sickle” emblem above is Bob Starrett, best known as a political cartoonist. He is a latter-day “Eccles” or “Gabriel” of Clydeside and beyond, as readers of his Rattling the Cage know, and readers of the Culture Matters site, as also the many activists who have gone to him asking for campaign designs for leaflets or posters, and invariably got them, sometimes within a turnaround time of a day or a night.

Does it affect your appreciation of Bob’s drawing when I tell you that it accompanies, or might accompany, a poem? It was drawn at my request to accompany a four- line fragment that was written by William Blake in the early 1790s, probably in 1793. This was a time when war with France was looming. England was an armed camp, with troops being recruited and drilled in many places, sometimes disrupting farm-work. There were shortages of grain, occasioning protest and social unrest. Blake’s loyalties in this turmoil of international and class war are clear from this little poem:

The sword sung on the barren heath,
The sickle in the fruitful field:
The sword he sung a song of death,
But could not make the sickle yield.

Compared with associates who were active at the time - Thomas Paine, William Godwin, Mary Wollstonecraft, et al - Blake was surely the most root-and-branch radical of them all, if that is not a contradiction in terms. To borrow a term from David Erdman’s book about Blake, he was a “Prophet Against Empire”, and the Empire that he stood against had many aspects, all abhorrent to him, all grist to his poetic and artistic mill, and all inter-related. So the Sword represents more than War, as the Sickle represents more than Peace.

Behind the Sword there is a nexus and a history of class rule, that Blake often signified in his poetry and his art by reference to the Crown, legitimised by the Church, and maintained by armies of soldiers, teachers, false prophets, and other agents of the Repressive State Apparatus, as modern parlance has it.

Behind the Sickle there is a nexus and a history of resistance to class rule, of which Blake was a part, both in his support for political action and in his production of literary and artistic works of opposition. These speak with greater reach and resonance today than in his own day. They draw on the earlier tradition of the Diggers and the Levellers (defeated) from the English Revolution of the Seventeenth Century, and feed into the rising Socialist Movement of the Nineteenth, Twentieth and Twenty-First Centuries (still not defeated).

Blake’s “Sword & Sickle” little poem was never published in his lifetime. It was hidden away in a crammed-full notebook, along with screeds of other writings and some drawings, from which Blake excavated the raw material for several of his finest books.

Out of this notebook came, for example, the highly wrought combination of text and design, Songs of Innocence and of Experience. One of the songs in it is the often quoted “London”. Here Blake showed a growing recognition of the growing centrality of Capital, industrial and commercial, in people’s lives. It provides a helpful context for the interpretation of the “Sword & Sickle” poem.

In its first draft, in the scribbled notebook, “London” starts as follows:

I wander thro each dirty street
Near where the dirty Thames does flow
And see in every face I meet
Marks of weakness marks of woe...

When it was printed and published, soon afterwards, the too-obvious adjective “dirty” had been amended to the much more telling “charter’d”, thereby pointing to the growing convergence of Law and the cash nexus that Blake observed all around him, at close hand, and suffered from himself. At the same time, as E.P. Thompson and others have detailed, the English working class was in the process of “making”, or self-making, as more and more folk were thrown on history’s scrap heap or herded into “dark satanic mills”. Blake was firmly in and of and for that class. 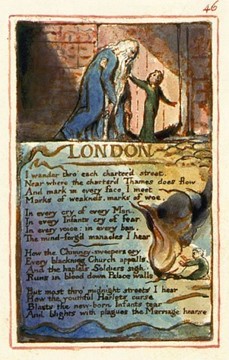 In the penultimate verse of “London”, Blake powerfully compressed his chosen images into telling rhymes. In doing so, he demonstrated how inter-related the different forces in his “Empire” were, in an evil hegemony:

How the Chimney-sweepers cry
Every blackning Church appalls,
And the hapless Soldiers sigh,
Runs in blood down Palace walls.

E.P. Thompson, following David Erdman, notes that, in the 1790s, it was common among radicals to “stress the identity of interests of soldiers and the people”; and the chimney sweeps can be taken as representatives of all enforced Labour, and also of stolen childhoods, and hence of ruined, shortened lives.

There is a companion piece of verse that underlines the “cash nexus” idea that is part of the web of meanings implicit in both “London” and “Sword & Sickle”. It is the following quatrain, also to be found in Blake’s notebook:

There souls of men are bought & sold
And milk fed infancy for gold
And youth to slaughter houses led
And beauty for a bit of bread.

So, in interpreting both Bob Starrett’s emblem and William Blake’s poem that inspired it, we see more than a pacifist plea, or an anti-war protest. We see a root-and-branch opposition to class society, expressed elliptically in the languages of image and word respectively, and hinting, through reference to the Sickle, at its future undoing.

If Blake can be called a Prophet Against Empire, is it too fanciful also to call him a Prophet for Communism, or at least for those early defining decrees that Lenin wrote for the young Soviet Union, namely the Decree on Peace and the Decree on Land. These were passed on 26 October, 1917 by the Second Congress of Soviets of Workers’ and Peasants’ Deputies. A fortnight later they were followed by a Decree on Abolishing Classes and Civil Ranks.

To echo and adapt Wordsworth remark on Milton, we might wish that Blake, thou shouldst have been living at that time!