The Waterfall and the Song and the Hammer in the Hand

Too many of the white machinists in this shop like Trump
they are good men
with a tool steel square or a finely calibrated micrometer gripped
in their hands
or a newly-born granddaughter held
against their heartbeats
but they have been fooled by a con artist
in the white house
and I look over at the Indian milling machine operators from Guatemala
and El Salvador
some of them rode the tops of boxcars into this country
others
send money home to mothers living next to sacred rivers
I give them this country
they do not engrave their names across their molybdenum-steel wrenches
and hide them away in toolboxes locked
with chain and padlock like the white machinists
they leave them spread across workbenches for other machinists
to use
and tape pictures of beautiful waterfalls
to their toolboxes
and I look over at the Mexican tool grinders from East L.A. singing mariachi
they would rather fill the air with beautiful melody
than wave a red white and blue flag
I give them the future
the Gabrielino Indian turret lathe operator whose ancestors lived in this L.A. basin
a thousand years ago
standing straight with a truth in his heart Trump can never touch
I put my hope
in him
and any man who needs a job
a home
a dream
I put my hope in the waterfall
and the song
and the hammer in the hand
we white men took this country
with our guns and our trains and our law books
but it was never really ours
its waterfalls
its waves its condors
its skies its grass blades and sunsets
and seas its beauty
like a wide-open workbench covered with tool steel wrenches free for all
to use.

This poem was partly inspired by by the current horrific immigrant situation surrounding the Mexico/U.S. border.

You say: ‘it’s not my business, my concern,
Nothing to do with me. My vote
Went to the good guys, those who’d turn
The horror-show around’ – I quote
Your own words back at you – ‘and spurn
This monster Trump’. But that, please note,
Is just the opposite of what we learn
From the last time they pushed their boat
Way out, those fascists, while we chose to burn
The one frail craft that stayed afloat
Till its name ‘socialism’ sank astern
And Hitler had us by the throat,
Us Germans. So don’t kid yourselves: you’ll earn
No thanks if your Trump antidote
Is that old ‘30s nostrum, ‘just adjourn
Things till they find some new scapegoat’. 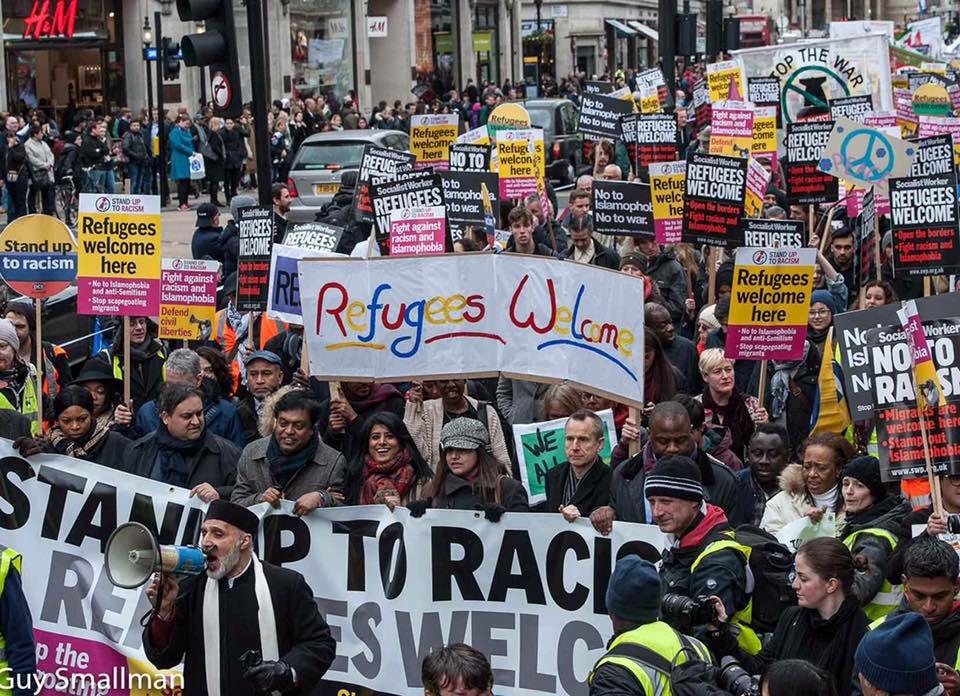 You tell me he, the monster, has his friends
And allies in your country, quick
To jump aboard the Zeitgeist as it tends
Once more to swing far-right and tick
All boxes on their list. How soon it ends,
That swing, depends on how you pick
Your moment, see which course it recommends
By way of strategy, and stick
Together till some twist of fortune sends
The monster close enough to kick
Its teeth in. If such vulgar talk offends
Your bourgeois-liberal ears, then flick
Back eight decades: thinking of Hitler lends
The mental jolt it takes to click
And really grasp what Devil’s dividends
Accrue when good folk miss a trick. 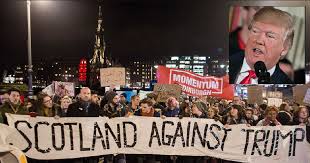 My point: you have that chance, don’t let it go.
The monster’s fellow-monsters thought
It high time to invite him over, so
Make sure it doesn’t go for naught,
That lesson from the past. It serves to show
What happens when those folk who ought
By rights to rise en masse and strike a blow
For liberty sit back and thwart
All plans to give some tyrant the heave-ho
Through mere inaction. Blame their short
Attention-span, their wishing to lie low
Where risk’s involved, or just the sort
Of knack we have for feigning not to know
When there’s some Trump-type juggernaut
Ahead. One thing’s for sure: the status quo
Won’t long maintain your life-support. 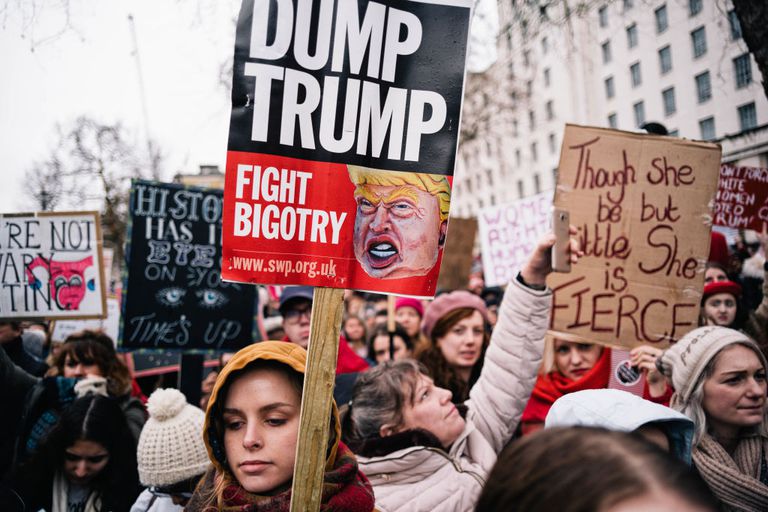 So now you’ve got this bunch of quisling Brits,
These fools and rogues in government,
Who’ve sold out to the monster, as befits
Their monstrous natures, sent
Our old friends packing, torn up any bits
Of customs-law that can’t be bent,
Dragged parliament and country through the pits
Of Trump-style racist hate-talk, spent
Two years in vain attempts to call it quits
With wiser allies who’d prevent
This looming shipwreck, done the moral splits
With every thug or dodgy gent
From sundry vile regimes, and – hypocrites
Unmatched - made sure that, if things went
Off-track, they’d have their own skin-saving kits
And thus no real cause to repent. 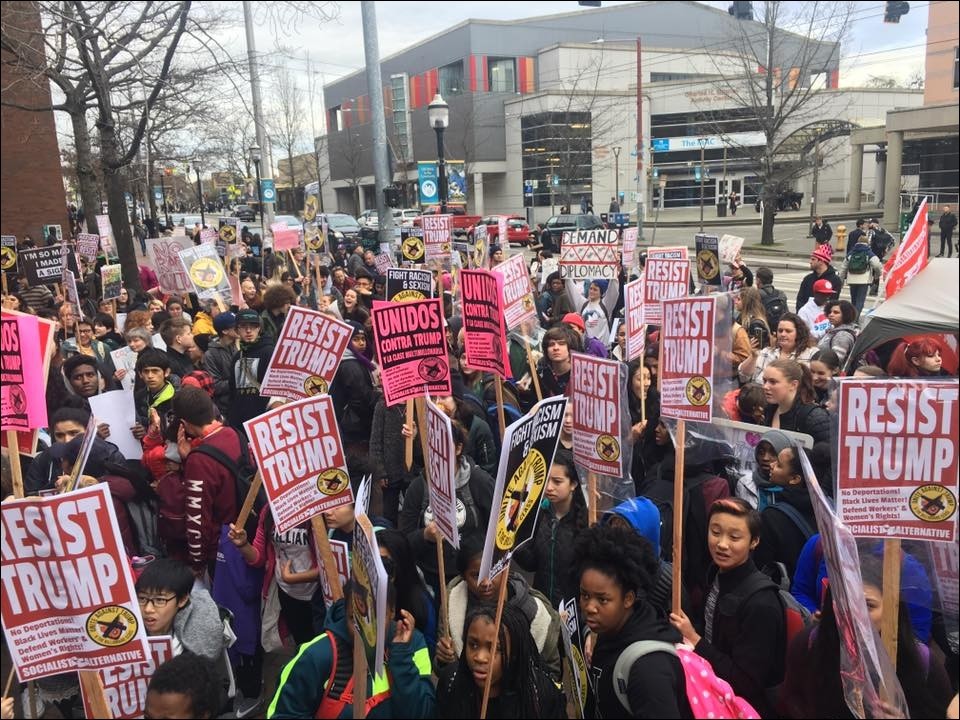 The Brexit scam, Trump’s visit – just in case
You’ve not caught on, they’re intertwined
At every checkpoint in the global race
For some ‘new order’ of the kind
That our flag-waving Brexiteers embrace,
Along with all the millions blind
To what’s afoot. Once more, they dare to base
Their claim on ethnic grounds combined
With junk-Romantic crap like ‘spirit’s place
Of earthly dwelling’, redefined
In racist terms. That’s what you’ve got to face,
You waverers, and get behind
This bid to occupy the fight-back space
Our craven parliament’s consigned
To Trump’s fifth-columnists. Let their disgrace,
Not yours, be always kept in mind!