Anthony Squiers reviews an astonishingly relevant production of Henrik Ibsen’s An Enemy of the People, performed on Zoom by the J.T. and Margaret Talkington College of Visual & Performing Arts School of Theatre & Dance, Texas Tech University

An Enemy of the People is one of Ibsen’s most famous works and one of the 19th century's most enduring pieces of political theatre. This new adaptation by Brad Birch performed at Texas Tech University under the directorship of Bill Gelber, a seasoned director and Brecht scholar, couldn’t have made its continued relevance clearer.

It is the story of Dr. Tom Stockmann (Steven Weatherbee) a man who attempts to use science and empirical evidence to prevent a potential public health disaster by reporting contaminated waters at the local spa baths. These efforts, however, are impeded by his brother, the mayor (Caleb Ranger Lowery) whose political and economic interests are threatened by this truth.

The public health crisis in the U.S.

The fact that this particular story is presented exactly at a time when the United States is suffering perhaps its worst public health crisis in history, and that this crisis is fueled by political interests who deny empirical evidence and scientific reasoning for their own benefit is an infuriating, grotesquely tragic amplifier of the play’s central themes, and served as an organizing principle of the production.

Recorded and then streamed via Zoom, the actors performed from separate locations at disparate times to maintain social distance, and appeared on screen individually, in their own windowpanes. Scenic cohesion was maintained through identical backdrops in each staging area and at times matching tables which created the appearance that they were in the same location. Indeed, the cast and technical team should be lauded for their efforts here. With only minor exceptions the players responded to each other with perfect timing and with exacting emotional intensity, reveal and gestures. Ranger Lowery and Laureen Karichu who played Hovstad, a journalist who tried to help Dr. Stockman make his findings public, were especially authentic in this regar,d rendering strong performances in a technically difficult situation. The result was an unorthodox theatre production which was nevertheless surprisingly easy to watch. 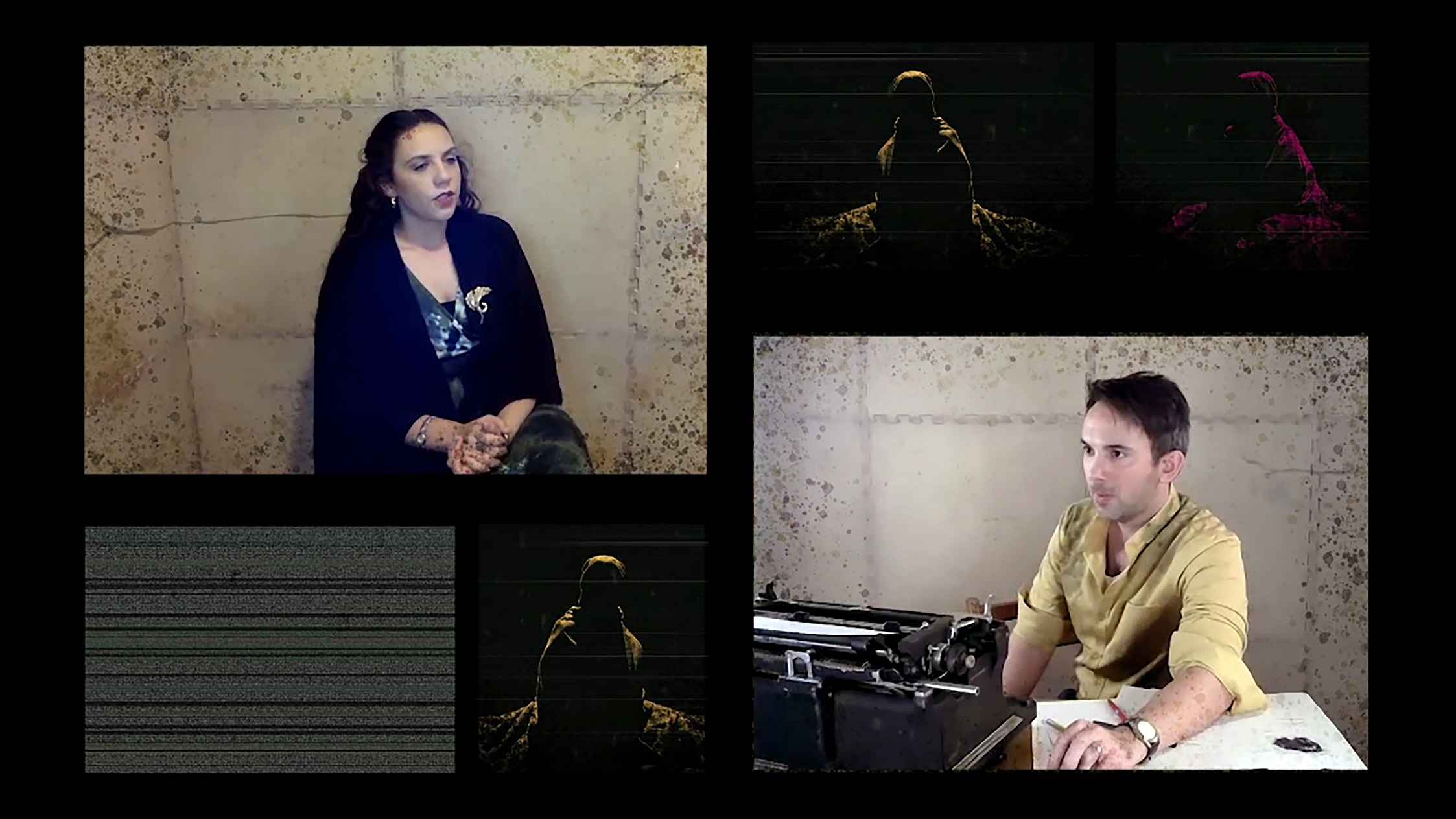 Furthermore, the show in some ways benefited from this pandemic-driven delivery method. While confronting the technical challenges of trying to present the appearance of scenic continuity while working with separate spaces, scene designer/prop master Grace Wohlschlegel opted for an exceedingly minimal aesthetic that had what might be termed a digital black box feel because of its simplicity — a desk or table, a typewriter, a handheld prop here and there, but little else. This was a remarkable level of humbleness and restraint which served the production immensely by forgoing pretence and letting the players use the text tell the story.

The Zoom delivery method also gave the production a voyeuristic tinge as if the audience was given a peek at the private lives of people tangled up in a political drama who just happened to forget to exit out of their last Zoom meeting. This gave the impression that the audience was penetrating the backstory of a politically relevant tale, without having to rely on the superficial treatment of such a story as filtered through the news media.

The economy or health?

But the real achievement of the production was the full-on embrace of the social reality that necessitated this type of delivery method in the first place by turning the pandemic into a permeating subtext of the visual representation. Accompanying the windowpanes of the performers were panels exhibiting mannequins seated in theatre rows and draped in cloths as if they were ghostly spectators, lifeless spectres in humanoid form who testified to the horrors of public health disasters — the potential disaster awaiting the town, in the play and the one lurking outside the audience’s doors. They were haunting, lingering reminders of what happens when public health is ignored for economic motives. The issue at hand (in both the play and the social ethos in which the viewers encountered it) is one of profit vs health. “Is the economy more important than people’s lives?” pondered Gelber, continuing “It really is economy or health, so we pushed that [theme].”

In the end, the production lands firmly on the side of health and its corollary scientific, empirical evidence-based knowledge. Dr. Stockman’s attempts to reveal the truth are met first with pseudo-scientific argumentation. When that fails, appeals to a false universalism are relied on, i.e. opening contaminated baths will be good for everybody. When this proves ineffective, ad hominem attacks, red herrings, and ideological appeals ensue. When these don’t work, the political elite embodied in the character of the mayor turn to economic coercion — persist and I will ruin you. 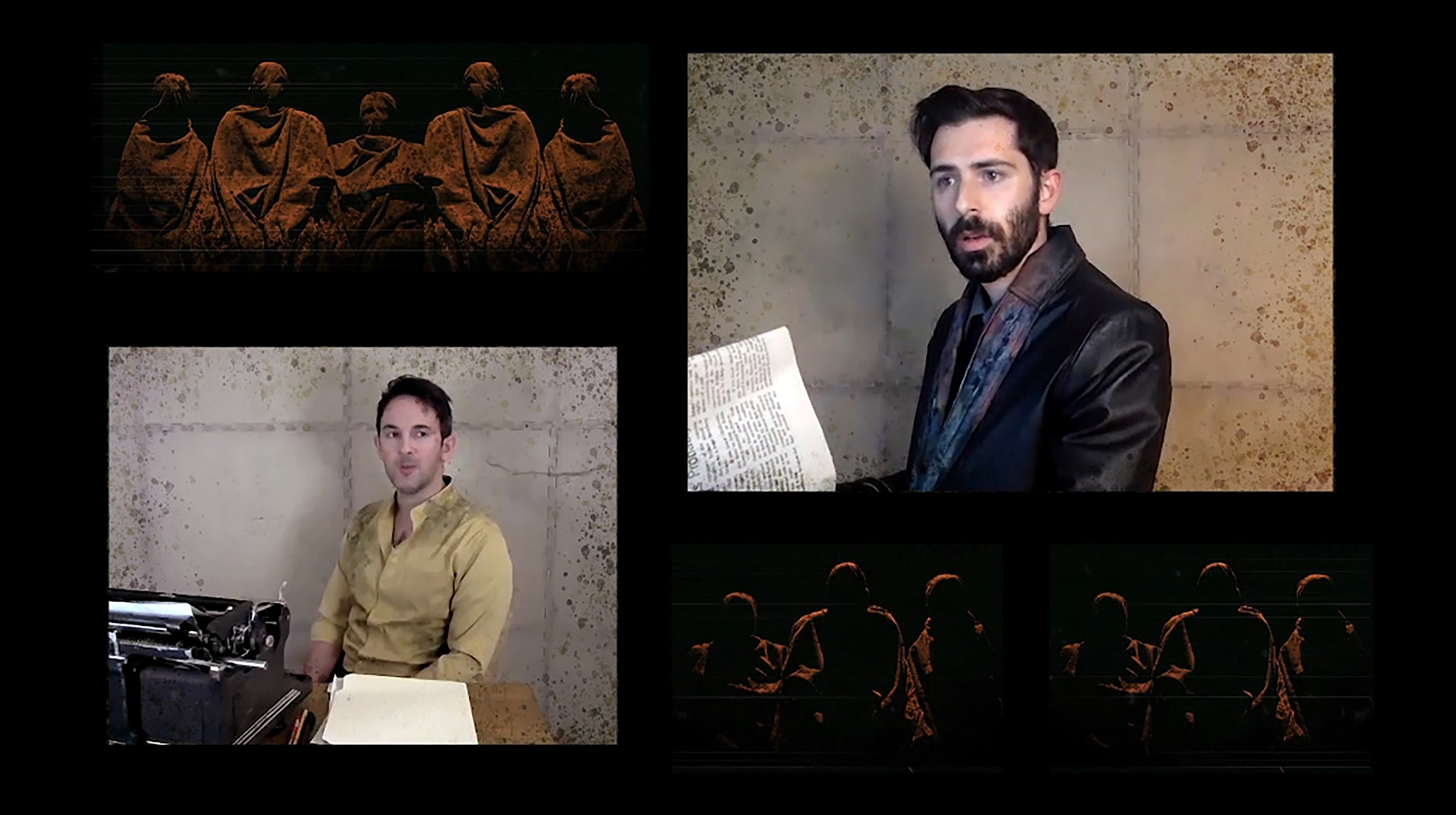 The truth, in the words of the mayor, is just “too expensive” to accept — too expensive for those who are financially invested in the baths. This idea of a truth too costly to speak was elevated through the censoring of the audio every time a character uttered what Dr. Stockman discovered about the bath’s water. The lines were obfuscated with auditory distortion and accompanied by a ‘technical difficulty’ message on the screen. The message was hidden until the very end when, having endured threats from his brother and faced with the prospect of financial devastation, Dr. Stockman refuses to capitulate. Agitated, desperate but still with conviction and fidelity to empirical observation, he screams his sharable truth: the waters are poisoned.

In this gesture, this final revelation, the audience is given hope of a world where science matters and profit and political expediency don’t outweigh public health and people’s lives. This hope took on further significance by encountering it the day after the spontaneous eruption of revelries all across the country celebrating the defeat of Donald Trump, a politician with a history of appeals to a false universalism, ad hominem attacks, red herrings, ideological fantasy, threats, attacks on science and the flaunting of public health to advance his own political fortune. In the show (as with the election results) one can just start to feel the slightest burgeoning sensations, faint reverberations of optimism.

With this production, Gelber and his cast and crew have delivered a resounding, socially relevant, politically salient success.

Henrik Ibsen’s An Enemy of the People, in a new adaptation by Brad Birch, directed by Bill Gelber, was delivered via Zoom by the J.T. and Margaret Talkington College of Visual & Performing Arts School of Theatre & Dance, Texas Tech University.

Anthony Squiers is a political philosopher and poet. He is the author of An Introduction to the Social and Political Philosophy of Bertolt Brecht: Revolution and Aesthetics and co-editor of Philosophizing Brecht: Critical Readings on Art, Consciousness, Social Theory and Performance.

Building a new machine: A review of From the Plough to the Stars

Giving a voice to the voiceless: Azadi, by Arundhati Roy