Phil Brett takes us on a tour of an exhibition at the Venice Biennale which explores the challenges which emigrants and immigrants face.

Away from the main sites of this year's Venice Biennale Arte (See Dennis Broe for a review of the festival) is the Diaspora Pavilion. It’s housed in a former palace, built on the proceeds of mercantile trade and theft – often two words for the same activity, of course. Cornered by two canals, and dripping faded grandeur, the building is an appropriate setting for the exhibition by 19 artists exploring elements of the diasphoric experience. Independent of the concept of national pavilions in the main festival, these are experiences of people far from their original homelands, of narratives transcending national boundaries.

This is the first time there has been a Diaspora Pavilion at the Venice Biennale. The main driving idea behind it is the gross under-representation of black and minority artists (BME) – even the lack of referencing the lives of BME people, in the world of art. (For a brief look at the conservatism of this art world, see my  Art for, and by the Many, not the Few).

In the wider world, the whole question of how people fit in, where they can live and where they're from, has become a toxic political issue.  Electoral successes by right wing (and shamefully, many social democratic) parties have been built on the back of scapegoating immigrants for the effect of austerity. With sick irony, it has transcended the national boundaries, with anti-immigration policies crossing the national boundaries which the racists want to strengthen.

Tragically, another reason for the pavilion's topicality is the death of Khadija Saye, the British Gambian artist who was killed in the Grenfell fire, whose work features in the exhibition. Her wet tin-plate pictures reference the rituals we use to cope with trauma.

Her pictures are as much about the process of production, as the final piece of art. Titled, "Dwelling: in this space we breathe", they have taken on a further powerful message, that the space, that she and other working class (and mainly BME)  people lived, lacked even the basic human right of safety - of adequate fire safety procedures. In 2017, the poor, the black and minority ethnic, indeed, anyone seen by the ruling class definition as being of 'us' are shunted out of sight. 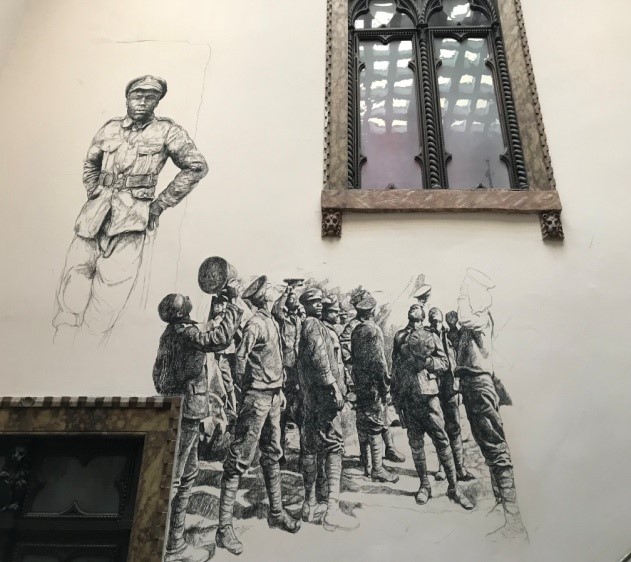 Being written out of history is also the theme of Barbara Walker's large in situ drawings of black soldiers in World War I. Appearing to be not finished, their bodies seem to fade into the white plaster. Like the role of BME troops in both world wars, they have been whitewashed out of existence. 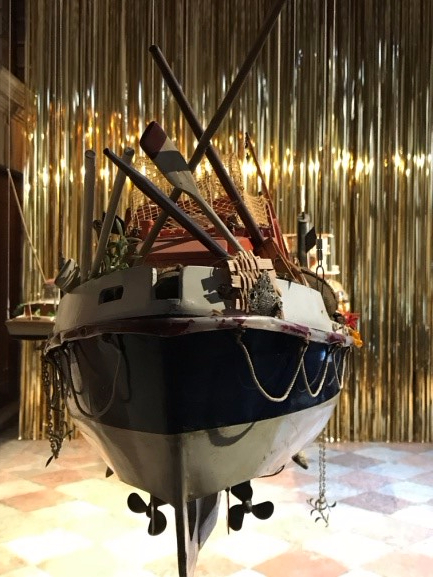 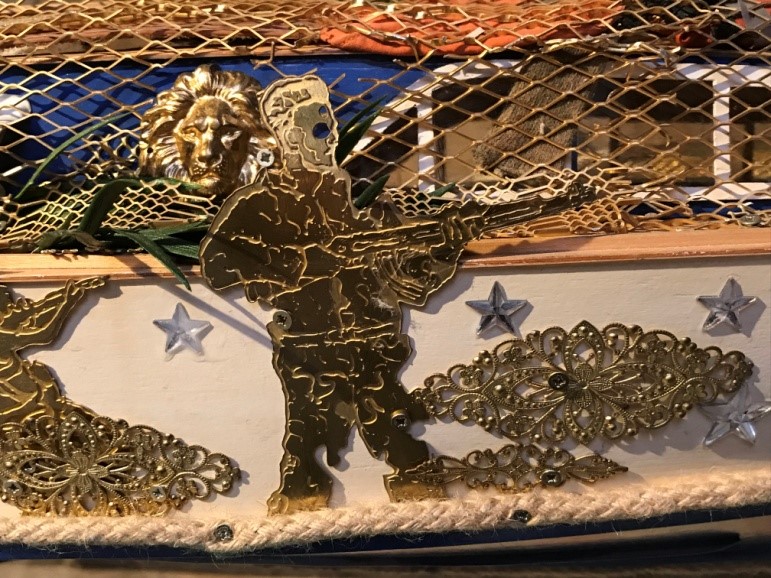 Forming the bedrock of the exhibition, arguably of the very concept of Diaspora, is transportation, sometimes voluntarily, but often forced, either by economic necessity or to escape war and famine. Or as millions suffered, by forced transportation - slavery (it has been estimated that 1.5 million slaves died in the passage). The legacy of which still affects the world with its sickness. Karl Marx, in Capital, and later Eric Williams, in his classic, Capitalism and Slavery, argued that the barbaric trade was not only responsible for the dominance of the British Empire but the birth of racism to justify it.

On the ground floor of the pavilion hang ships by Hew Locke. On and surrounding the ships are cut-outs of Portuguese mercenaries made by 16th century Benin sculptors. Hanging by them are figures of contemporary soldiers, and I was reminded that just as Venice gained its power by control of the Mediterranean, so today the EU patrol the same sea, blocking immigrants who are risking their lives for relative safety. The ships may face a gold curtain but they are flanked by armed force. 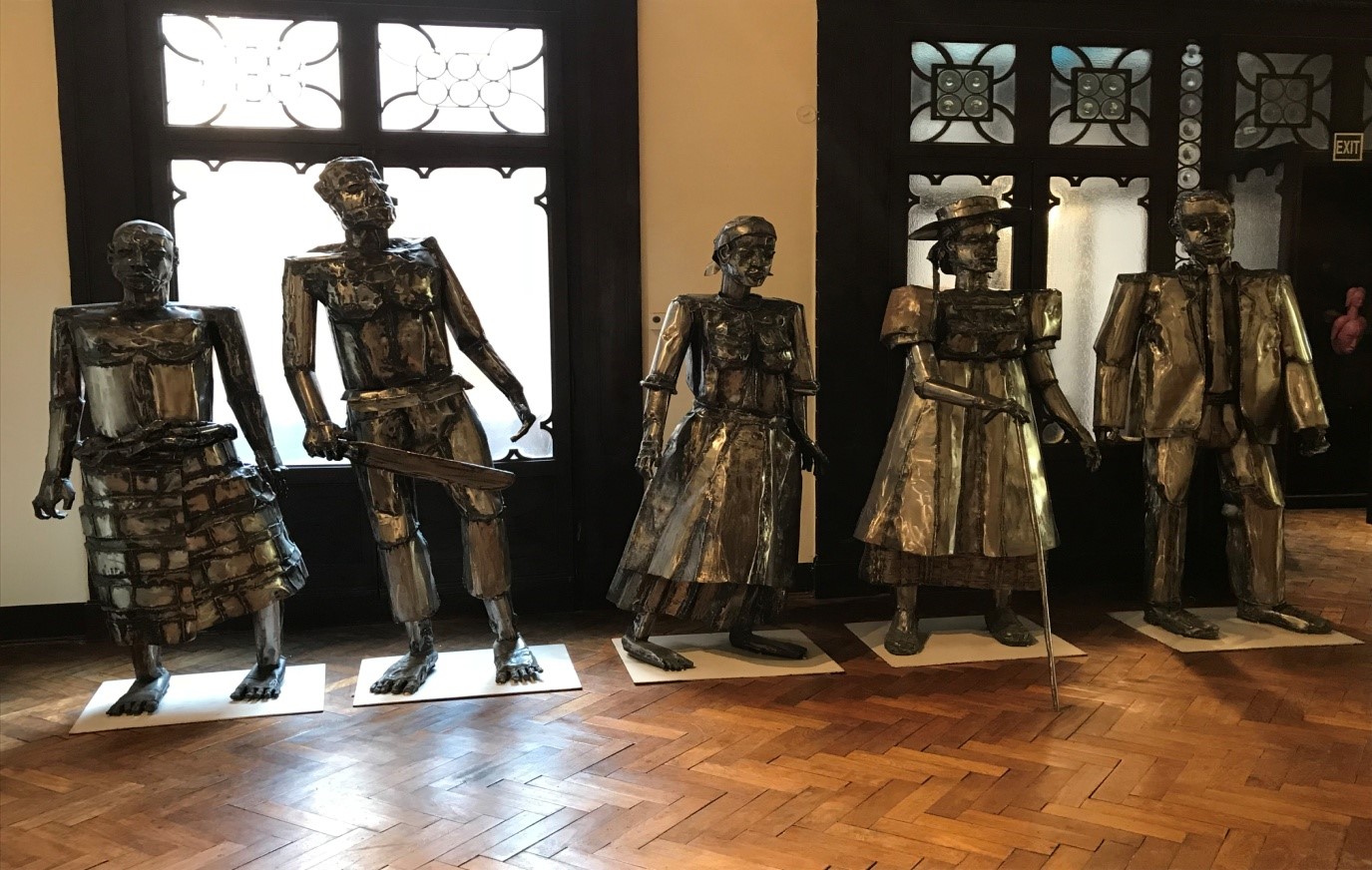 Above this, on the first floor, stand large figures by Sokari Douglas Camp CBE, showing the stages of slavery in Sierra Leone, from indigenous, to slave, to post-liberation era figures. They stand proud, dominating the floor, indeed, almost the whole exhibition. Nigerian born, but living and working in the Elephant & Castle, Camp is one of the better known artists being shown, with her large metal sculptures appearing in such diverse places as St Paul’s and the American Museum of Natural History. I will happily say that I am a fan. 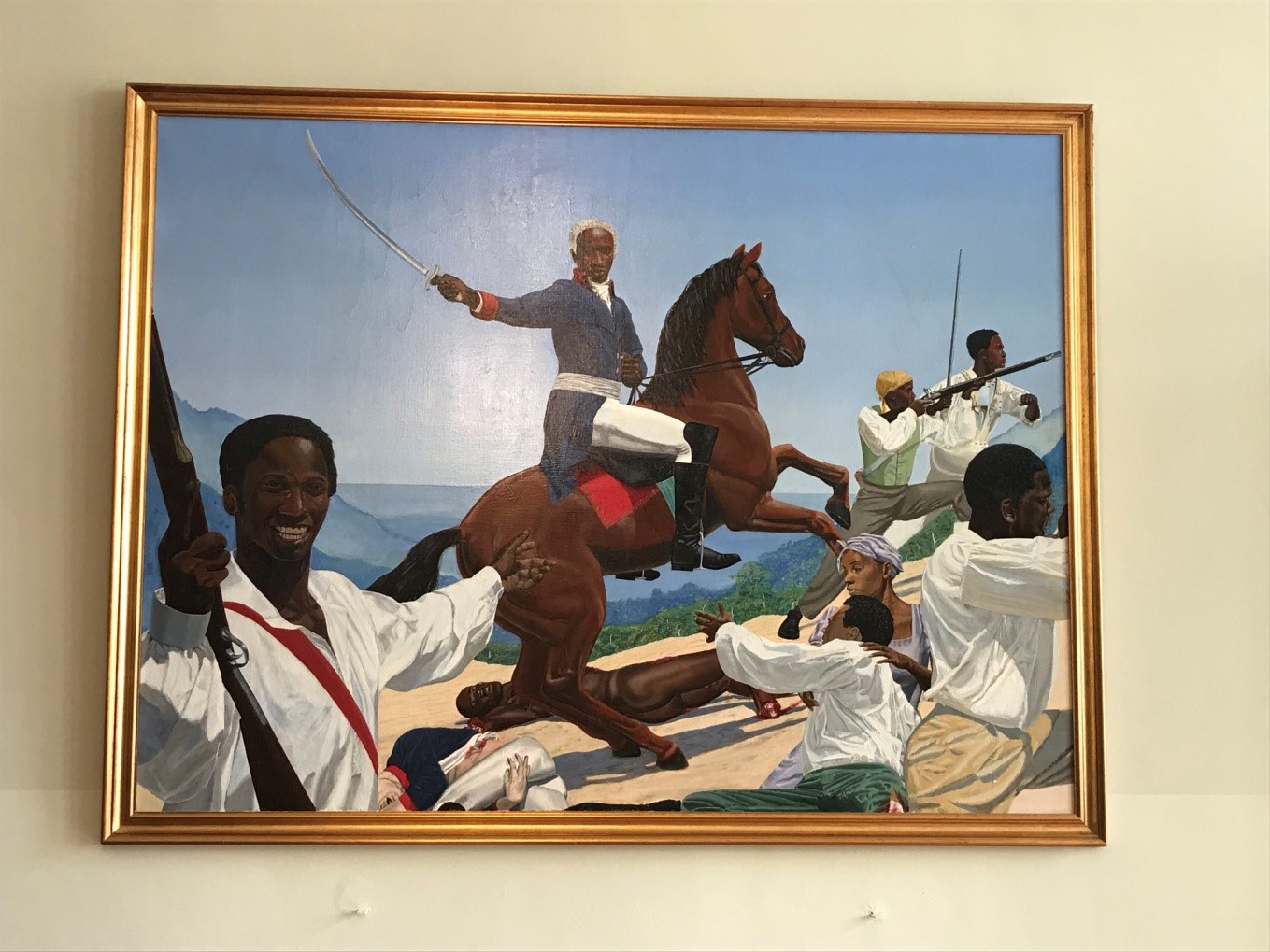 This exhibition though, is not solely about the crimes committed against people of colour but also of their resistance. Sometimes it is by arms, as shown by Kimathi Donkor's painting of Toussaint L'Ouverture leading the slave rebellion for Haiti's independence. Its structure echoes Jacques-Louis David's Napoleon Crossing the Alps, which heralded the demise of the Venetian republic. Donkor, known for his dramatic figurative art of key moments of black history, whether the subject is the murder of Stephen Lawrence or Nanny of the Maroons leading slave rebellions in Jamaica, has a direct style, which never tries to over-complicate. 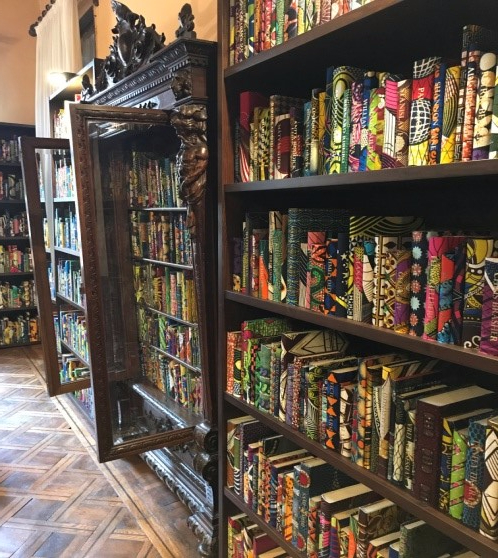 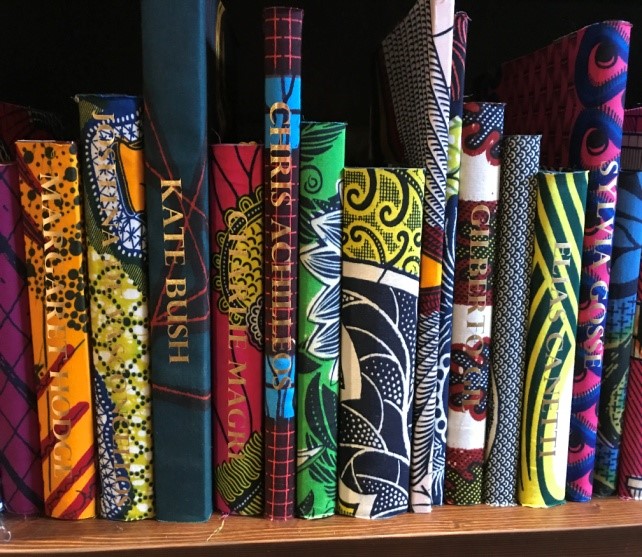 There is also the theme of immigrants’ struggles to get their ideas, knowledge and skills accepted into western society, whilst retaining their identity. Yinka Shonibare MBE's wonderful installation of a library, looking so traditionally English, with its wooden bookshelves, has books by first and second generation immigrants, while others are by people who have opposed immigration. All are covered in traditional African designs. Whether the authors in the library acknowledge it or not, no society is pure, comprising a mix of cultures - complementing, intertwining and sometimes conflicting.

Looking at it, perhaps the Chinua Achebe quote is apt, "People create stories create people; or rather stories create people create stories". Shonibare's work explores the concept of identity and the interrelationship of the histories of Africa and Europe. His most public work in doing this was the large Nelson's Ship in a Bottle on the fourth plinth in Trafalgar Square. This installation, I think is just as successful, and like the whole pavilion makes me hope that the exhibition will travel to the UK so people who don't have the funds to visit Venice can enjoy it. 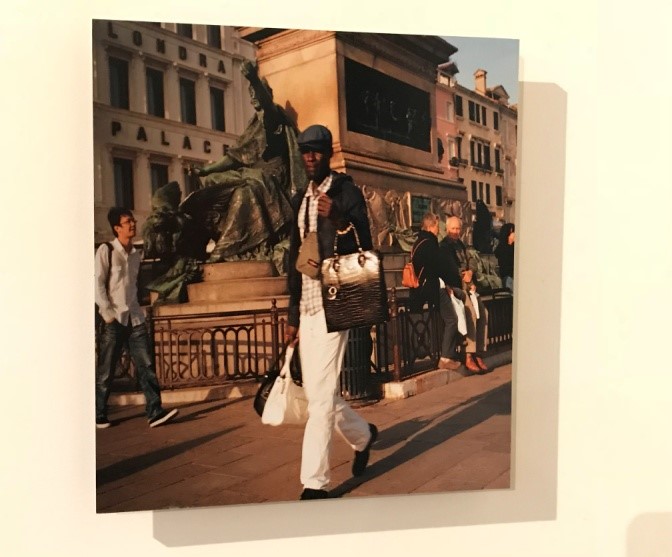 It has never been easy for immigrants to survive. The major struggle has been that of survival. Whether from the Diaspora in renaissance Venice, the eighteenth century Britain or today's Europe. Many were, and are, pushed to the margins of society, as seen in the photographs of street sellers of African descent, selling handbags to tourists on the Venetian sea front, by Dave Lewis. 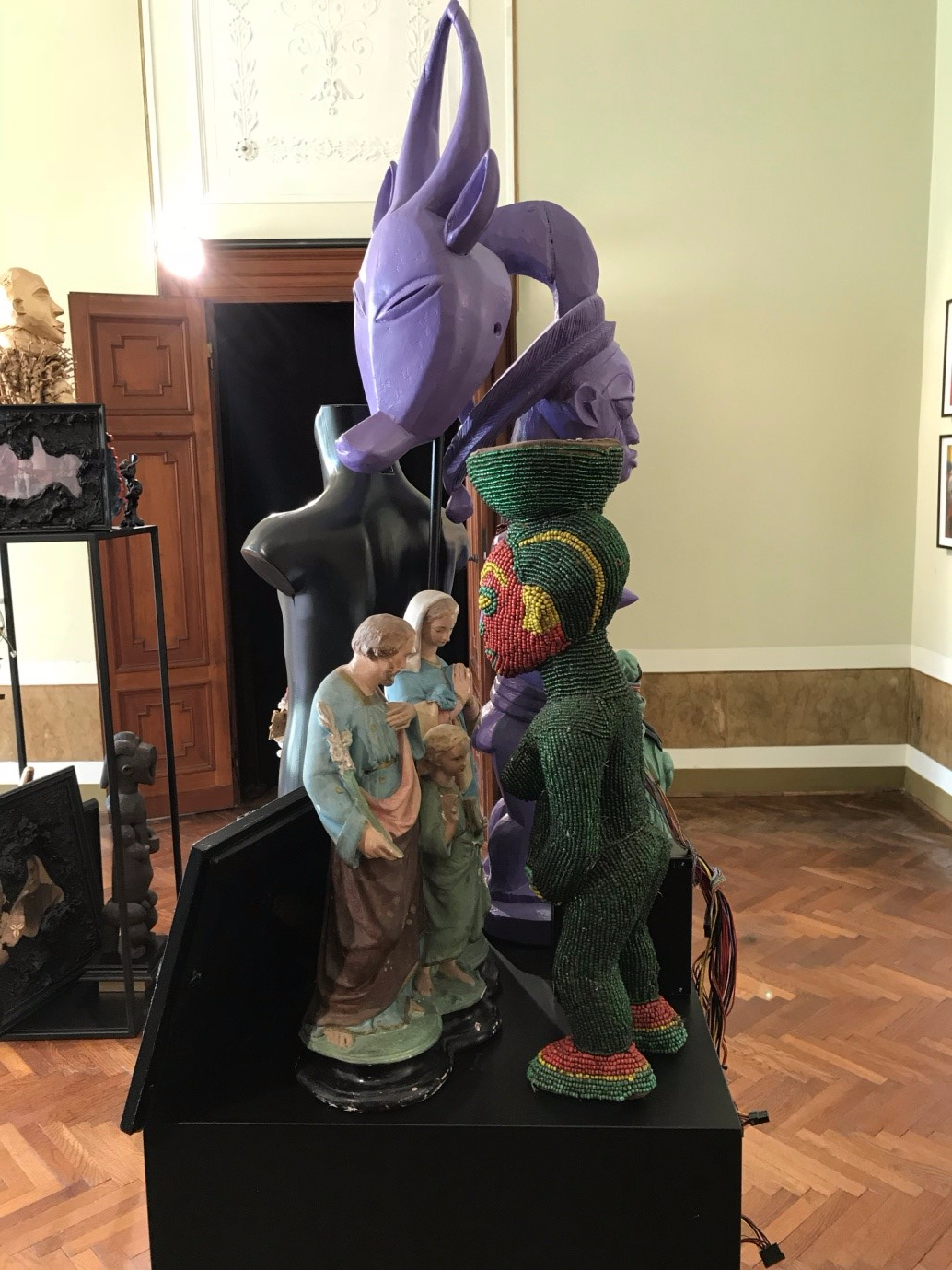 People might be economically marginalised, but that doesn't mean that their beliefs and traditions are. Directly or indirectly, they're alive in their hearts and minds. A part of the cultural mix which creates us. Such is an element of Michael Forbes' installations where African iconography mix with western figures. Cultural and national references sit by each other, crossing national boundaries, as does the Diaspora. Sometimes they combine to create new beliefs or narratives, at other times they exist in parallel. The tension of different cultural heritages runs through this pavilion. As Salman Rushdie said, "Sometimes we feel we straddle two cultures; at other times, that we fall between two stools". 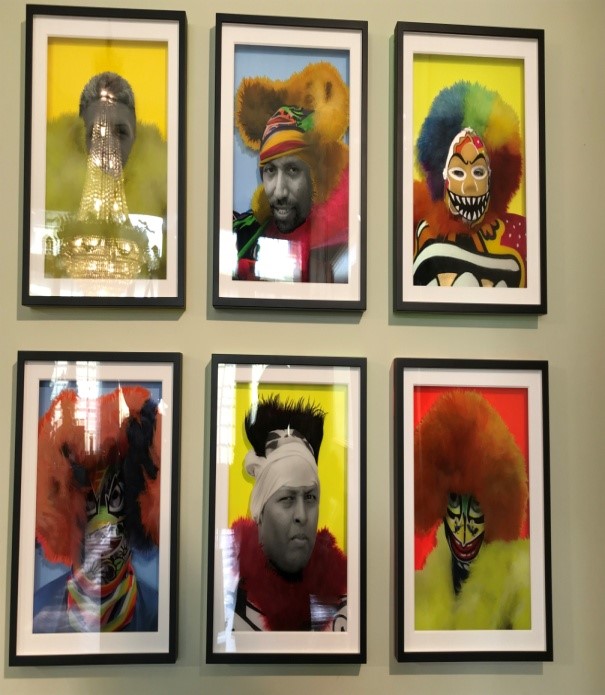 But it would be wrong to think of the exhibition as worthy and heavy. Yes, it is thought provoking, powerful at times, with far more than has been mentioned here including some great video and audio art, but it is also vibrant and playful. Nicola Green's Bate Bola prints mix Rio's Carnival, Venice's mask ball and English Tudor clowns do have something to say about the cross pollination of cultures, but it also brought a broad smile to my face.

Leaving the pavilion, heading back into the labyrinth of Venice's alleyways, hoping not to get too lost (again), I felt that the exhibition had educated, intrigued, moved – and yes, entertained me.

Phil Brett is a primary school teacher, who has written two novels (Comrades Come Rally and Gone Underground) set in a revolutionary Britain of the near future. In between planning lessons and marking, he is writing the third.