Jenny Farrell presents the life and work of Ernest Barlach, born 150 years ago

Ernst Barlach was born near Hamburg on 2 January 1870. He was the most important German sculptor of the 20th century. Brecht said about his work: “His genius, meaning, ingenious craftsmanship, beauty without embellishment, stature without over-stretching, harmony without smoothness, vitality without brutality make Barlach's sculptures masterpieces”.

Barlach was educated in Hamburg and Dresden, also studying in Paris. A trip to Russia in 1906 was a decisive moment in his artistic development. The sense of community among the ordinary people there impressed him deeply, but also their sadness, and a threatening silence after the failed revolution of 1905. 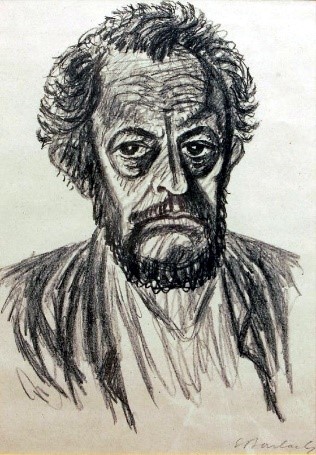 In 1910, Barlach settled in the northern town of Güstrow. Systematic slander of his art started even before Hitler took power. In Güstrow, Barlach created much of his work, removed and partly destroyed by fascists after 1933. In 1937, the commission for “degenerate art” confiscated his works exhibited in German museums, including the memorial for the victims of war in Magdeburg Cathedral. He wrote to his brother Hans following this event: “I will not be able to work for the foreseeable future ... I won't go abroad, I feel like an emigrant in my homeland - and worse than a real one, because all the wolves are howling at me and behind me.” In this year before his death, he created masterpieces such as “Freezing old Woman” and “Laughing old Woman”, testimonies to his courage, his terror and his humour. Barlach died on 24 October 1938 and was buried in the town of his childhood, Ratzeburg.

Barlach's lithograph “Mass Grave” of 1915 was not deemed safe for printing until much later, in a very small edition. His lithograph “From a Modern Dance of Death” depicts the murderous grimace of war. His 1919 large-format woodcuts express social degradation as a direct result of the dehumanisation caused by war. They include “Death of a child”, “Robbers of the Cross and Coffin”, “Good Samaritans”. These works moved Käthe Kollwitz so deeply that she tried her hand at woodcutting, creating her famous memorial sheet for Karl Liebknecht.

In January 1952, Brecht recorded his “Notes on the Barlach Exhibition” at the German Academy of Arts. 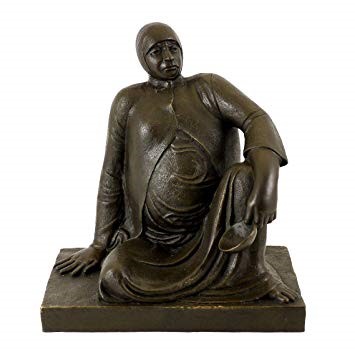 Brecht wrote about “Russian Beggar Woman with a Bowl” (1906): “A powerful person with hard confidence, from whom no thanks for alms may be expected. She seems immune to the hypocritical assertions of a corrupt society that one can achieve something by diligence and making oneself useful.”

In “The Melon Cutter” (Bronze, 1907), Brecht praises “a work which created an eater from the people with great sensual power. He has seated himself exactly as it is best suited for this very activity, and he does not lose himself in his work.” 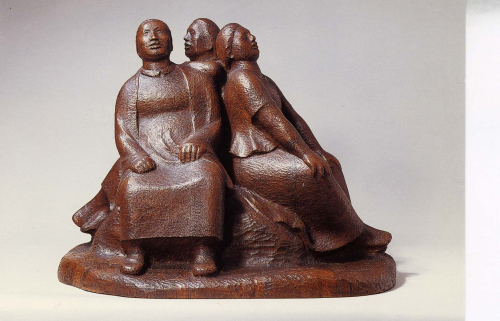 Brecht liked this wood carving of “Three singing women” (1911) “because the combination of power and singing is pleasant to me.” 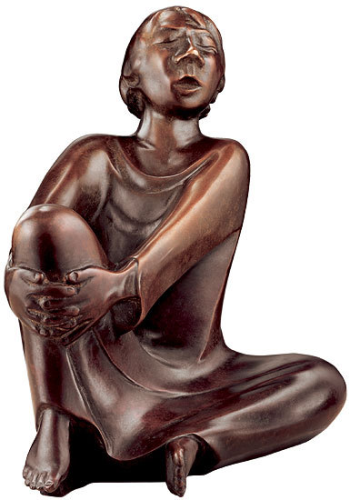 Song is represented differently in this sculpture “The Singing Man” (Bronze, 1928). Brecht finds this man “bold, in a free posture, clearly working on his singing. He sings alone, but apparently has an audience. Barlach's humour desires him to be a little vain, but no more than is compatible with the practice of art.” 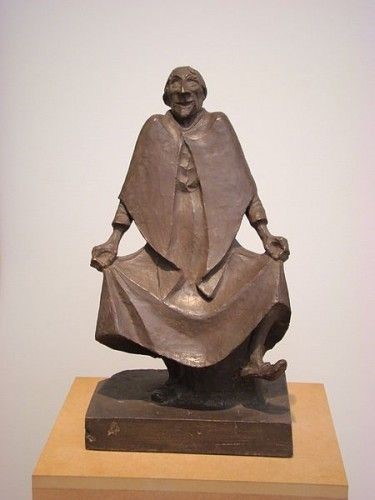 In “Dancing old Woman” (Tinted Plaster, 1920) Brecht praises the “humour, which is extremely rare in German sculpture. The grandeur with which the old woman lifts her skirt to dare another little dance! Her gaze is directed upwards: she delves in her memory for the right step.”

The Kiss groups 1 and 2 (bronze, 1921) are “of great interest” to Brecht “because the sculptor ... achieved a greater intimacy by roughening the material, i.e. by actually coarsening it. The work is a pleasing departure from the sweet, genderless Cupid and Psyche figurines in the drawing rooms of the petty bourgeoisie.” 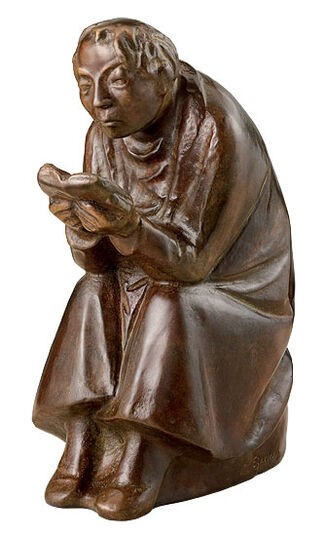 The year they were made is particularly significant for the sculptures from 1933 onwards. There is “The Book Reader” (Bronze, 1936). A man sits bent over, holding a book in his heavy hands. Brecht said: “He reads with curiosity, confidently, critically. He is clearly looking for solutions to urgent problems in the book. . . I like “The Book Reader” better than Rodin's famous “Thinker”, which only shows the difficulty of thinking. Barlach's sculpture is more realistic, more concrete, not symbolic.”

“Freezing old woman” (Teak, 1937) interests Brecht because this crouching “maid or small farming woman, so visibly physically and mentally abandoned by society” could not “protect her hands from the cold”. Brecht continues, “It is as if her job is to freeze, and she shows no anger. But the sculptor shows anger, far more anger than pity”.

In his commentary on “Seated old Woman” (Bronze, 1933) Brecht refers to how “masterfully the clothing is designed”. “One tiny detail makes it completely realistic: the woollen scarf... The old woman sits upright, she is thinking. ... I can imagine a worker nudging Barlach’s old woman with his elbow: Take power! You have everything that you need.” 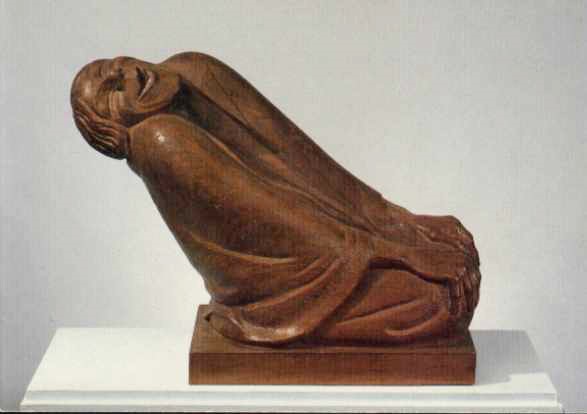 From 1937 comes “Laughing old Woman” (wood). Brecht enjoys its irresistible cheerfulness and points out that this was the year in which Barlach's works were banned from German museums as degenerate. “Her laughter is like singing, it has loosened the entire body, making it almost look young.”

All these sculptures point in a realistic way to the essential humanity in people and express Barlach's love of people, his deep and compassionate humanism. Brecht concludes, “Barlach writes: 'It is probably the case that the artist knows more than he can say. But perhaps it is so that Barlach can say more than he knows.”

Jenny Farrell was born in Berlin, and works as a lecturer in Galway Mayo Institute of Technology. She is the author of Revolutionary Romanticism - Examining the Odes of John Keats, Nuascéalta, 2017.