Dennis Broe reviews Black Suns at Louvre Lens in France, on until the end of January 2021

Lens was a small but highly important town in the industrial era of the late 19th century, located in the former French-Belgium coal belt. It is now the home of the satellite museum Louvre-Lens and the site of the first major post-coronavirus lockdown exhibition in France – and perhaps the first in the world.

Soleils Noirs, or Black Suns, traces artists’ use of the colour black. It also reminds us of the spell that coal – visible in two pyramidal slag heaps just outside the town and visible from all parts of it – has cast over a city which has now transformed itself from a coal-exporting to a tourist economy.

This change from a productive to a symbolic economy is all the more startling because Lens was at the heart of a Franco-Belgian region that was the industrial capital of the world in the late 1800s, outdoing even northern England, the centre of industry in the earlier part of the century. It was near here that Emile Zola came to do his research for Germinal, his seminal work on a strike in a coal mine. 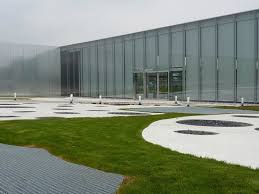 The last of the mines closed in 1968, at the beginning of the Western transformation from an industrial to a service economy, as European jobs started to be shifted overseas or to Eastern Europe. Today, Louvre visitors eat lunch outside, on the covered-over entrance to mine shaft number 9. The Louvre Lens building itself, in the centre of a verdant park that was constructed over the mining grounds, is a ’90s flat corporate glass structure by the Japanese firm SANAA, that seems to have been airlifted into Lens from some alien space. It’s the opposite of Frank Gehry’s Bilbao museum, a fish-like structure that suggests that city’s historical relation to the sea. Here the museum design effaces history.

The town itself, besides being subjected to the environmental devastation of the coal economy, was also in the centre of the fighting in World War I. This second assault by Capital on the working class wreaked even more havoc on the town. Lens was utterly destroyed as a result, and had to be rebuilt from scratch after the war. 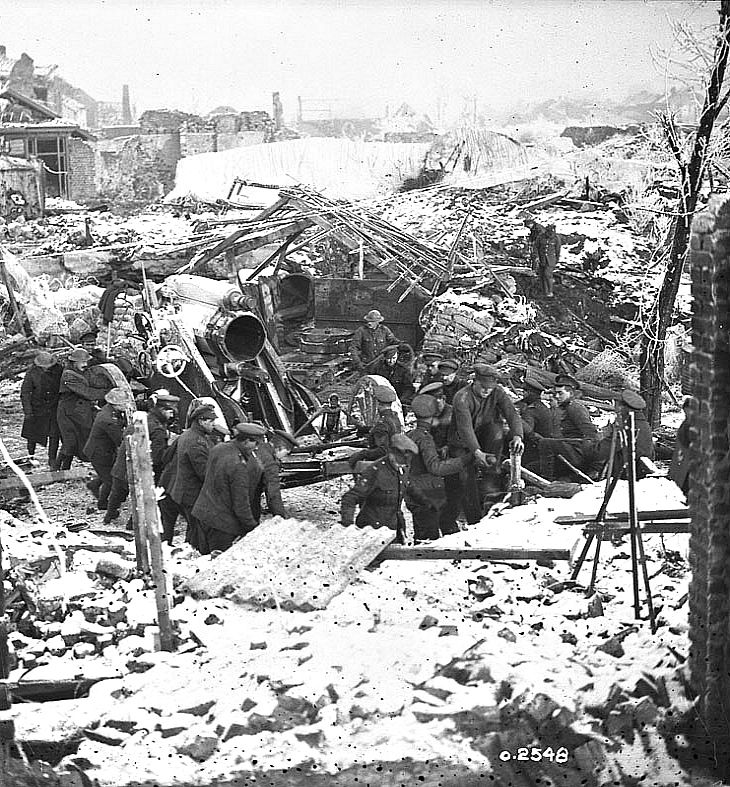 A mini-tour which the city offers of the miners’ quarters outlines the power structure of a mining town. The mine’s owner lived in the more cosmopolitan nearby city of Lille, comfortably sheltered from the suffering at the mine. The workers lived in mostly single family units built by the mining company, which also ran the school their children attended – where no doubt they were informed this was the best of all possible worlds. The place of honour and the larger homes in the town were occupied by the mine’s engineer, the mine’s police and security director, and the pastor, each concerned with maintaining order and profitability.

The workers’ cottages seem ample. However, when one recalls that black lung disease claimed many of them at an early age, the neat, white entrance doors are perhaps closer to an upright coffin, which echoes a clip in Black Soleils from FW Murnau’s Nosferatu in which the vampire’s exit through his castle door suggests an eerie tomb.

The lobby exhibit is another pyramidal pile of coal, but unlike the actual slag heaps just outside the city, this one is made of pieces of black confetti. It suggests the way the town, whose industry is now a combination of tourism, banking and retail, has transformed itself from the heaviness of actual coal into an economy that is lighter, airier but also – especially in these COVID times, more fragile. The Lens attempt at transformation is echoed in England in Liverpool’s and Manchester’s recreation as arts centres, and in the US of Pittsburgh’s incomplete changeover from coal and steel capital to an eastern US version of Silicon Valley.

The exhibition itself is a major examination of darkness, and the thrill and energy it exerted in the history of art. To its credit, the exhibition also never strays far from the pall that black in the form of coal has cast over the town and that artists have represented.

Though not present in the exhibition, the originator of the contrast between black and white, darkness and light, in highly distorted settings, is Caravaggio and his traces are everywhere in the show. Prior to Caravaggio’s early 17th century chiaroscuro, there is Tintoretto’s 16th century Renaissance portrait of a man holding a handkerchief, clothed almost entirely in the darkness of the Venetian nobility, with the handkerchief being a single splotch of white. Piero della Francesca’s portrait of an Italian nobleman with brown skull cap, which subtly takes on the black sheen of the background, is outdone by Leonardo da Vinci’s startling depiction of another nobleman whose black bonnet blends utterly with the murky background in a way that suggests that regal bearing returning to primordial ooze. 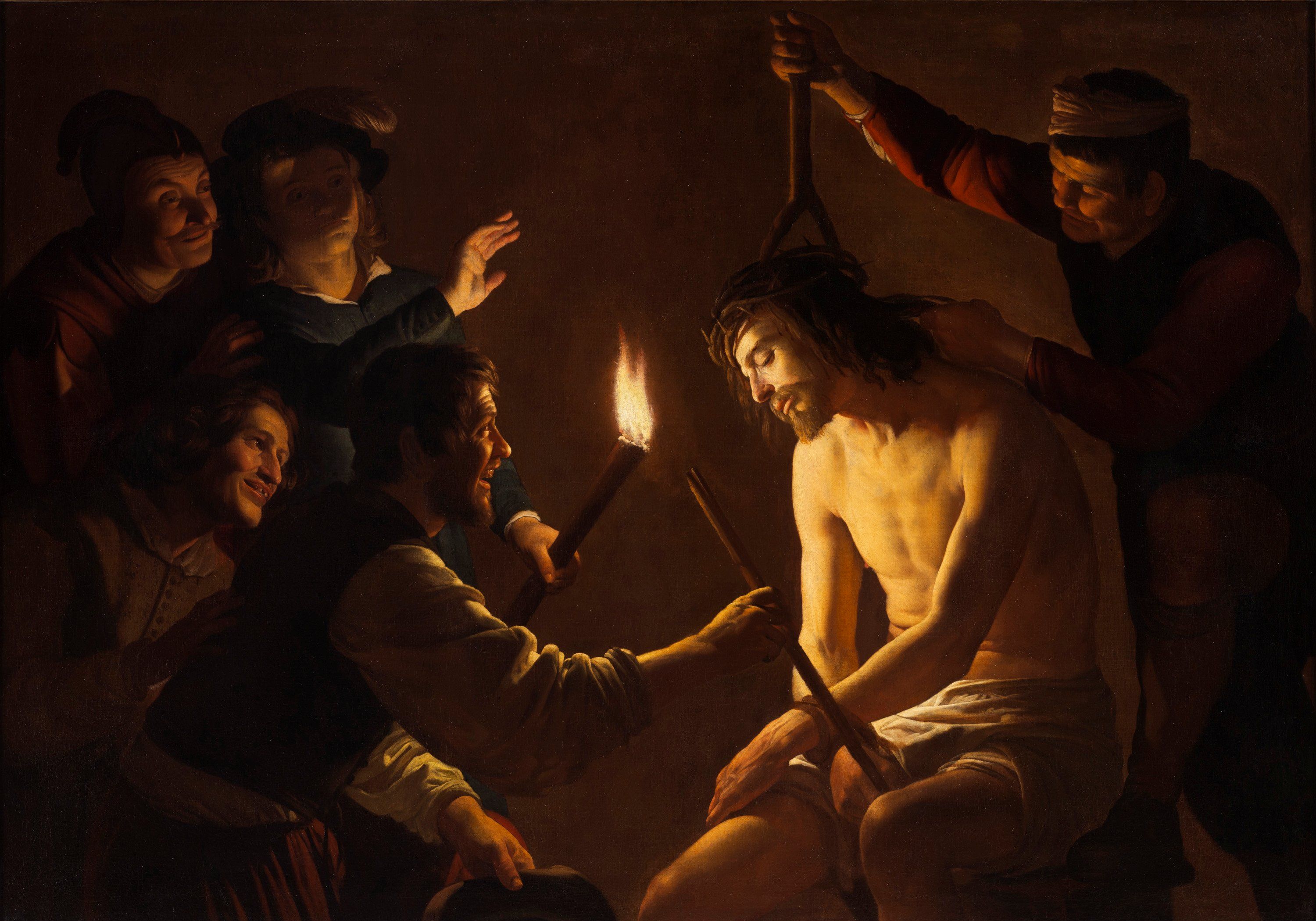 There were Northern European Caravaggistes, represented here in the Dutch Gerrit van Honthorst’s illumination of the faces of what looks like Dutch merchants peering out of the darkness to torture Christ. And there is Rembrandt’s etching of a white mass of figures wrenching Christ’s body down from the cross and out of the darkness. 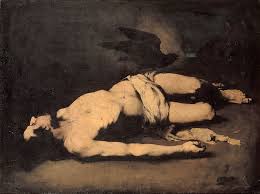 Ribot's St. Vincent and The Raven

The Spanish Caraviggistes are more bountifully represented with Jusepe de Ribera’s Plato holding a book of ideas, seeming to wrench light from the darkness, and with Murillo’s Christ chained to a column, his gaunt body about to succumb to the shadows behind him.

The most stunning Caravaggio-influenced paintings though are those by the French artist Theodule Ribot, more than 200 years later. His 1870 Good Samaritan shows nothing of the Samaritan of the biblical story, instead focusing in the foreground on the twisted frame of a man beaten and robbed by thieves and in shadowy background the Pharisees, the religious zealots, passing him by. Ribot’s other work, which echoes Edgar Allan Poe’s The Raven, is the contorted corpse of Saint Vincent with a black bird perched on top, cawing and eager to feast.

The Romantics are well represented in the exhibit in their combination of a welcoming of the mystery of the night and of the force of nature. Emile Breton’s Storm has four peasants as tiny specks on a landscape, trying to find shelter from a monstrous wind that is tormenting and twisting the trees around them.

Equally tumultuous is the landscape that Mephistopheles and Faust gallop across on their steeds in Delocroix’s lithograph, which has the Devil importuning the scholar as he invests him with the glamour and decadence of the night. 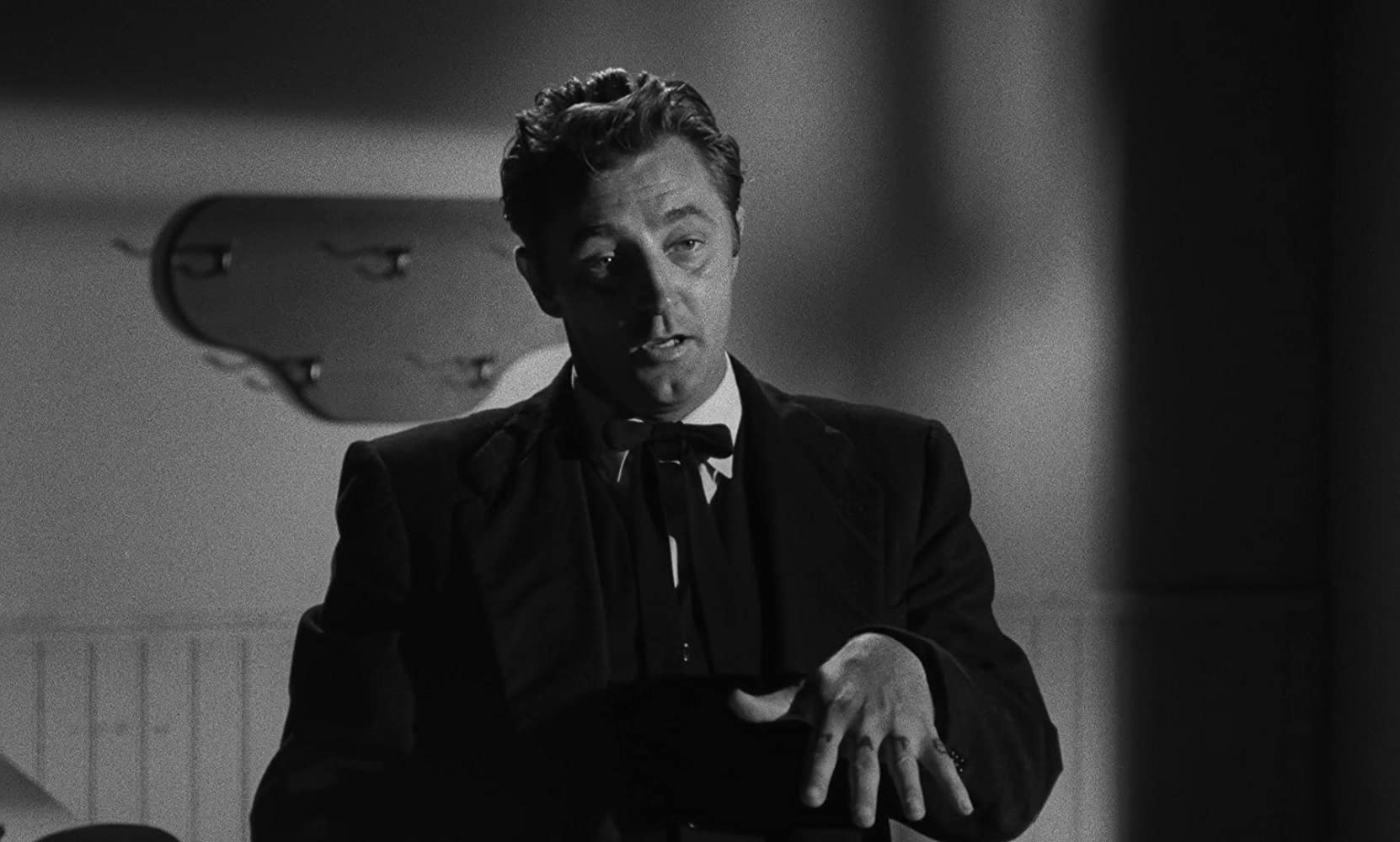 Robert Mitchum’s murderous minister in Night of the Hunter

Just as stunning are three film clips that recall the Romantic era. Hitchcock’s opening of Rebecca has the innocent young bride in voiceover recounting her entry into the haunted estate, a bastion of male power, as the camera pans up a road covered with underbrush to alight on a dark and foreboding mansion. The evil and seduction of the night is also highlighted in the man’s midnight meeting with his mistress in Murnau’s Sunrise, and the pursuit through a swamp of the children by Robert Mitchum’s rampaging murderous preacher, in Charles Laughton’s Night of the Hunter. This is a film that lays bare the subconscious evil that was the underside of pristine corporate, capitalist America in the 1950s.

The Symbolists of the 1880s and 1890s also embraced black and the night for its shimmery, translucent, ethereal qualities. Odilon Redon’s illustration of a combination of Poe’s poem The Raven and his short story “Elenora” has the woman and the bird appearing as if from beyond the grave, with each shaded in black. Gustave Dore’s woodcutting The Wolf and The Lambs displays the penned-in creatures being eyed in the moonlight by a crew of hungry wolves, in a night not only where all cows are black but where all lambs are eaten.

It is in the Realist and Impressionist era though that the night begins to symbolise the dark weight of industrialism in the lives of the bourgeoisie – and more pointedly on the mass of workers who suffered from it. Manet’s portrait of the future Impressionist painter Berthe Morisot in black dress has her gaunt fingers twisting around a fan as she stares pensively at the painter. Philippe-Auguste Jeanron’s 1833 A Paris Scene is more class conscious, with three children in the foreground crouched around a slumping, bandaged father, as in the background a bourgeois couple stroll blithely across the same bridge. The father’s bandage represents the unsuccessful attempt at a Paris uprising in 1832, which the royalty and industrialists put down as they increased their wealth through capitalist exploitation.

In the same vein, in 20th century photography, two photos from the 1950s by the aptly named Jean-Philippe Charbonnier (charbon is the French word for coal) capture first a little girl running though a mining tenement, her clothes taking on the omnipresent dark element of soot, which is also captured in a second photo of a garment on a mining tenement clothesline. Near the end of the mining period, in 1960, a series of miners’ photos are highlighted by one of a stolid, unblinking face of a miner in whose gaze is captured both the pride of his work and the hardship it inflicts on him. 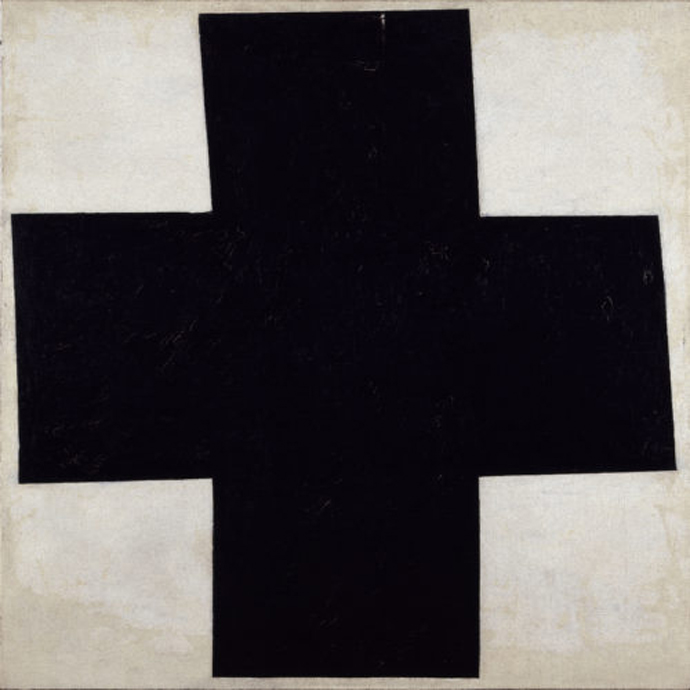 Painting in the 20th century moves toward an embracing of the symbolic economy, as representation gives way to abstraction. The Russian Suprematist Kasimir Malevich’s 1915 Cross is a huge oversize, weighty black cross, almost tipping over on its white background. This is not pure abstraction though. The bulk and oppressive weight of the cross, with Russia at war with Germany on nearly the eve of the Russian Revolution, suggests not only the Iron Cross, the German military badge of honour, but also the pulverizing weight of the Orthodox Church in maintaining the Czar’s power as he sends his subjects off to die. The painting predicts that both are about to collapse. 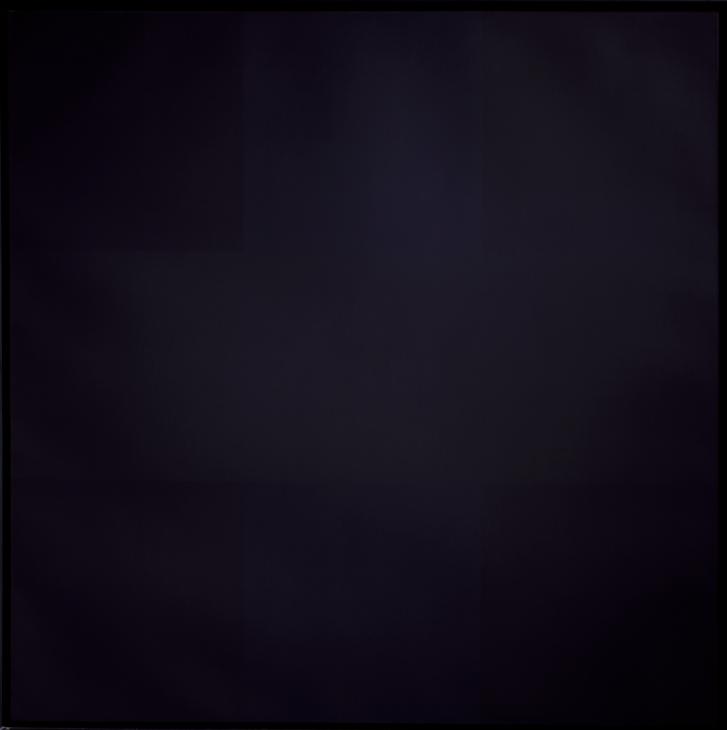 Finally, there is Ad Reinhardt’s Ultimate Painting from 1960, a black rectangle where one can only dimly perceive even different shades of black. This void is perhaps meant to signify the end of painting, but what it may also signify, given its place at the beginning of the changeover in the West from an industrial to a service economy, is the dawn of a symbolic regime where finance and fictitious capital will outpace industrial and productive capital. That is, Western capital itself is at the beginning of a movement to a level of abstraction where the stock market, currency speculation and a nascent digital economy will dominate the productive and industrial economy. This moment thus also calls into being Abstract Expressionists such as Reinhardt who represent it on their canvases.

This transformation is also strikingly visible in the geographical setting in which the painting is displayed – the transformation of Lens from mining economy to museum economy.