Gareth Edwards considers the changing attitudes to sport that resulted from the Russian Revolution.

In 1917 the Russian Revolution turned the world upside down, inspiring millions of people with its vision of a society built on solidarity and the fulfilment of human need. In the process it unleashed an explosion of creativity in art, music, poetry and literature. It touched every area of people’s lives, including the games they played. Sport, however, was far from being a priority. The Bolsheviks, who had led the revolution, were confronted with civil war, invading armies, widespread famine and a typhus epidemic. Survival, not leisure, was the order of the day.

It would be easy to characterise the Bolsheviks as being anti-sports. Leading members of the party, such as Leon Trotsky and Anotoli Lunacharsky, were close to those most critical of sport during the physical culture debates that took place in the early 1920s. In addition, the party’s attitude to the Olympics is normally given as evidence to support this anti-sport claim. The Bolsheviks boycotted the Games on the grounds they would “deflect workers from the class struggle and train them for imperialist wars”. Yet in reality the Bolshevik’s attitudes towards sport were somewhat more complicated.

In the aftermath of the revolution, sport would, unsurprisingly, play a political role for the Bolsheviks. Facing internal and external threats which would decimate the working class, they saw sport as a means by which the health and fitness of the population could be improved. As early as 1918 they issued a decree, On Compulsory Instruction in the Military Art, introducing physical training to the education system.

The position of women in society had already been greatly improved through the legalisation of abortion and divorce, but sport could also play a role by increasingly bringing women into public life. “It is our urgent task to draw women into sport,” said Lenin. “If we can achieve that and get them to make full use of the sun, water and fresh air for fortifying themselves, we shall bring an entire revolution in the Russian way of life.” 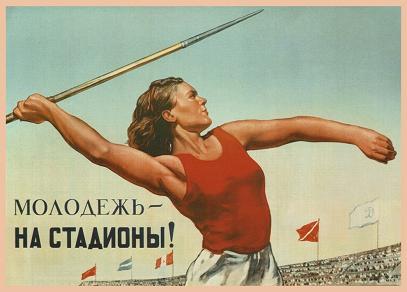 And sport became another way of conveying the ideals of the revolution to the working classes of Europe. The worker-sport movement stretched across the continent and millions of workers were members of sports clubs run mainly by reformist organisations. The Red Sports International (RSI) was formed in 1921 with the express intention of connecting with these workers. Through the following decade the RSI (and the reformist Socialist Worker Sports International) held a number of Spartakiads and Worker Olympics in opposition to the official Olympic Games.

Just as important was that participation in the new physical culture could be a life-affirming activity, allowing people to experience the freedom and movement of their own bodies. Lenin was convinced that recreation and exercise were integral parts of a well-rounded life. “Young people especially need to have a zest for life and be in good spirits. Healthy sport – gymnastics, swimming, hiking all manner of physical exercise – should be combined as much as possible with a variety of intellectual interests, study, analysis and investigation… Healthy bodies, healthy minds!”

But the Bolsheviks were never overly prescriptive in their analysis of what physical culture should look like. It was not for the party to decide what constituted the best system of sports or produce the correct line for the working class to follow. Rather it was for the mass of people to discuss and debate, experiment and innovate, and in that process, create their own sports and games. Nobody could foresee exactly what the play of a future socialist society would be like, but equally no one could doubt that the need to play would assert itself. As Trotsky said, “The longing for amusement, distraction, sight-seeing and laughter is the most legitimate of human nature.” 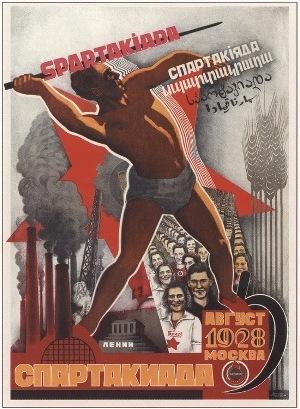 The Bolsheviks approach was just one strand in the wider physical culture debate, which also included the hygienists and the Proletkultists. The hygienists, as the name implies, were a collection of doctors and health care professionals whose attitudes were informed by their medical knowledge. Generally speaking, they were critical of sport, concerned that its emphasis on competition placed participants at risk of injury. They were equally disdainful of the West’s preoccupation with running faster, throwing further or jumping higher than ever before. “It is completely unnecessary and unimportant,” said A.A. Zikmund, head of the Physical Culture Institute in Moscow, “that anyone set a new world or Russian record.” Instead the hygienists advocated non-competitive physical pursuits - like gymnastics and swimming -as ways for people to stay healthy and relax.

For a time, the hygienists influenced Soviet policy on questions of physical culture. It was on their advice that certain sports were prohibited, and football, boxing and weight-lifting were all omitted from the programme of events at the First Trade Union Games in 1925. However, the hygienists were far from unanimous in their condemnation of sport. V.V. Gorinevsky, for example, was an advocate of playing tennis, which he saw as being an ideal physical exercise. Nikolai Semashko, a doctor and the People’s Commissar for Health, went much further arguing that sport was “the open gate to physical culture” which “develops the sort of will-power, strength and skill that should distinguish Soviet people.”

In contrast to the hygienists the Proletkult movement was unequivocal in its rejection of ‘bourgeois’ sport. Indeed, they denounced anything that smacked of the old society, be it in art, literature or music. They saw the ideology of capitalism woven into the fabric of sport. Its competitiveness set workers against each other, dividing people by tribal and national identities, while the physicality of the games put unnatural strains on the bodies of the players.

In place of sport Proletkultists argued for new, proletarian forms of play, founded on the principles of mass participation and cooperation. Often these new games were huge theatrical displays looking more like carnivals or parades than the sports we see today. Contests were shunned on the basis that they were ideologically incompatible with the new socialist society. Participation replaced spectating, and each event contained a distinct political message, as is apparent from some of their names: Rescue from the Imperialists; Smuggling Revolutionary Literature Across the Frontier; and Helping the Proletarians.

The hopes of the revolution died, alongside thousands of old Bolsheviks, with the rise of Josef Stalin. The collectivist ideals of 1917 were buried, replaced by exploitation and brutal repression. Internationalism was jettisoned in favour of “socialism in one country”. As the values and imperatives of the society changed so too did the character of the country’s physical culture. By 1925 the Bolsheviks had already turned towards a more elitist model of sport. Around this time Stalin is reported to have said: “We compete with the bourgeoisie economically, politically, and not without success. We compete everywhere possible. Why not compete in sport?” Team sports reappeared, complete with capitalist style league and cup structures. Successful sportspeople were held up as heroes in the Soviet Union and the quest for records resumed. Many of the hygienists and Proletkultists who had dared to dream of new forms of physical culture perished in the purges.

Eventually sport became a proxy for the Cold War. In 1952 the Soviet Union was re-integrated into the Olympic movement, ensuring that the relative strength of East and West was measured at each Games in gold, silver and bronze. As the country was inexorably compelled into economic, political and military competition on the international stage, so it also found itself drawn into sporting competition with the West.

Just as it would be a mistake to judge the ideals of the Russian Revolution by the horrors of Stalinism, so we should not allow the latter days of Soviet sport to obscure those remarkable early experiments in physical culture. Today, sport is a plaything of oil sheiks and states, corporations and oligarchs. Corruption, controversy and doping are all rife. Sports fans are increasingly priced out of the games they love to watch and play; workers building the stadiums for global mega-events are, tragically, paying a much higher price. The need for a critique of the contemporary sports world is, if anything, even more urgent than it was 100 years ago.

Gareth Edwards is a socialist based in Portsmouth. He teaches on the Sports Journalism degree course at the  University of the Arts in London. He blogs infrequently at https://inside-left.blogspot.co.uk