Dennis Broe presents Episode 3 of his series on TV series

First it was called the Celtic Tiger, and then the Celtic Phoenix. The rise of Ireland to a European economic powerhouse was fuelled initially by a housing boom, which then crashed in the wake of the bursting of the US housing bubble. The Phoenix then rose from the ashes, stimulated this time by Foreign Direct Investment as Ireland became a corporate and particularly a tech and Silicon Valley tax shelter.

This phenomenon even gave rise to what in tax swindling parlance is referred to as a “Double Irish with a Dutch sandwich,” a way of a company funneling both US and European profits through the low tax rates of Ireland and The Netherlands and then on into Caribbean countries with zero tax rates, so that if the accounting is done to perfection the original company pays no taxes at all.

This “Leprechaun Economics” profited a few while leaving the many behind, and led in the most recent election to the rejection of the two ruling business-friendly parties, Fianna Fail and Fine Gael. Instead, the population embraced Sinn Fein, which promised, like Bernie Sanders in the US and Jeremy Corbyn in the UK, to redress the blatant inequality that now defines the country, and to focus on healthcare, education and housing. 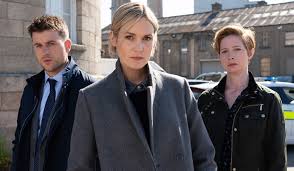 This is the background from which springs the Irish series Taken Down (available on Amazon), an often bitter grappling with the underside of the economic miracle as seen from the perspective of a family of Nigerian refugees. The series begins with an African mother, Abeni Bankole and her two kids, explaining that her husband has been killed, swept into the sea on the trip over, and that she is seeking a new life in Ireland.

We then flash forward four years later where the family of three is still trapped in a one-room flat that is part of a decaying high-rise on the edge of Dublin. This hovel is contrasted to frequent long shots of a modern downtown, with its gleaming freeways and polished corporate skyscrapers. The bright lights of the economic miracle stand in stark contrast to the drab nether regions of those on the outside of that miracle.

The mother is forced into clandestine cleaning work in a brothel, which it turns out preys upon the young refugee girls for its ill-gotten gains. Brian Gleeson is particularly effective and loathsome in the series as the supposedly caring government supervisor of the housing estate which he uses as a site from which to funnel underage girls to the brothel, while also exploiting them himself. The death of one of these girls brings in the Irish police, which includes a sympathetic female inspector and a casually racist hotshot young male detective. 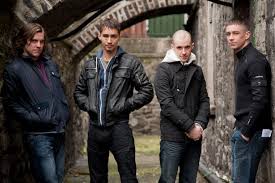 The show is at its best in documenting the prejudice and air of superiority projected by the supervisor, the male cop and most blatantly and offhandedly by the gangster overlord of the brothel, who insouciantly manipulates the girls and the other Nigerians who work for him. The mother, who tries to protect both her sons and the girls in the brothel as much as she can while under the careful scrutiny of the gangster boss, is the emotional centre of the series. She has been compared to Brecht’s Mother Courage, a scavenger in the Thirty Years War. Abeni is actually more caring and less stoic, though like Brecht’s character she is also trapped in her own kind of war, this time a class war, and forced to accommodate herself to it.

The irony is the Irish have always been thought of as amongst the downtrodden of Europe, but in the wake of the wealth that is permeating the country, they are seen here as projecting their superiority on the most downtrodden. The tax-evading values of the corporate scam at the top of the Irish social pyramid seep down onto the street. Here we watch Irish people pursuing the same kind of greedy profit at all costs mentality, with more visible exploitative consequences that are experienced most of all by the young Nigerian women in the brothel. 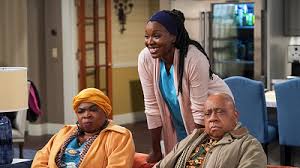 The Nigerian mother’s plight is a far harsher but more realistic view of the problems of integration into the West than the proud Nigerian nurse who is the heroine of CBS and Chuck Lorre’s Bob Hearts Abishola. That series is a very touching romance but in comparison to Taken Down it presents a softened and sanitised view of the ruggedness and poverty of the African immigrant experience.

Hunters and The Commodification of Evil

There is nothing impoverished about the high production values of Amazon’s Hunters, a flashy BIFF-BAM-POW, highly-stylized, comic-book version of the Holocaust and its aftermath. It has drawn criticism because of its overinflated scenes from the camps, including one of a human chess board where the pieces taken off the table are then slaughtered. Hannah Arendt talked about the banality of evil in her coverage of the Nuremburg trials of the Nazis after the war. Here, what we have is the “commodification of evil.” Unlike say JoJo Rabbit which has something serious and heartfelt to say about the limiting stupidity of xenophobia and hate speech, this show is only about the hyperactive, overblown narratives now powering the race between Netflix, Amazon and the other streaming services for viewers. 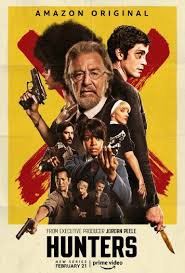 The series is open about its comic-book intentions. There is one point where the boy who is being brought into the gang of Nazi hunters, each with their own “powers,” asks the leader how he put the team together, referring to him as “Professor X.” This references a concentration camp plot at the origin of the X-Men and acknowledges the comic-book aspect of the series.

Hunters also deals with aspects of the post-Holocaust experience, including Operation Paperclip, where the US secretly brought Nazi scientists to work on its projects, most notably the space race and the hydrogen bomb. This is old material though, and has done much better, fo example in The X-Files. Here the intersection with reality only adds to the superhero and supervillain bluster to the point where the end of season one is the introduction of the ultimate Holocaust villain, here reduced to the status of a Magneto, the X-Men’s arch foe.

The show is set in 1977 and draws upon other comic-like pop illusions, including Blaxploitation costumes and imagery, and campy Batman graphics from that 1970s show, which work to dislocate the show from any factual historical grounding. 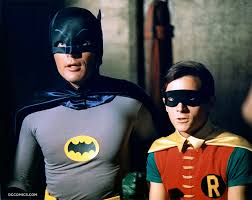 This is Al Pacino’s first series. He is at the centre of it as the leader of the band, and is perhaps the most troubling character in the series. He preaches a violent form of not justice but revenge, justified by the still active and lethal presence of the Nazis. There is a recognition that the violence he perpetuates is the result of what happened to him in the camps, but this realization is lost within the show’s overwhelming attitude – and the Pacino character’s persistent argument – that the only real imperative is a forward thrust toward more unquestioned violence.

Yes, there is a resurgence today of anti-Semitism, and the Nazi sentiments never die – witness the far right AFD in Germany. However, there are no global plots for a Nazi takeover, and thus the violence the show promotes may be necessary self-defence by Jews but it could also eerily rationalize other forms of violence prevalent today, including that of Israeli settlers and their protectors against the Palestinians.