You cannot carry out fundamental change without a certain amount of madness. It comes from non- conformity – the courage to invent the future. - Thomas Sankara.

Recently sketching an account of my experiences working in Channel 4 throughout the 1980s and early 1990s has led me to speculate about the prospects for a return to a wider range of progressive views in the media. With its bold remit to innovate in the form and content of programmes, Channel 4 was at the cutting edge of a broadcast culture that had been open to more radical voices, and a strong leftist tradition had developed since 1968.

In a television context it was a period where John Berger presented Ways of Seeing for BBC 2 and Stuart Hall made Karl Marx: The Spectre of Marxism with Thames Television. Clearly the range of politics available through public service broadcasting in Britain since then has become much more restricted – but that makes it all the more necessary to think of ways to rebuild and indeed to surpass the opportunities of the past in the very different context of the present-day. Perhaps some of the guiding principles applied to the setting-up of the new channel are relevant to progressive change in the media now?

Public service television gradually reduced bandwidth under market pressure and closed down genuine pluralism in the name of choice. The recent Conservative Party attacks on the BBC are a not-so-subtle way of reshaping broadcasting in an ideologically more amenable form. However, the dominance of the market and neoliberal ideas are increasingly being challenged on several fronts. The recent Labour Party manifesto proposed re-nationalisation of rail, mail and utilities, and several writers in recent articles in the series published jointly between the Morning Star and Culture Matters have proposed ways of democratising the ownership and control of cultural production.

The contemporary resurgence of the Left in British politics – as in the 1970s and 1980s – has happened in tandem with the growth of a casualised independent film sector. Individuals, workshops and groups have developed, structures of communication and connection and are facilitating the circulation of alternative views. What is lacking, however, is even a partial realisation of the potential of that sector to participate in the industry, reaching wider publics through mainstream distribution. Although the industry should not be seen as monolithic or closed, there are few outlets for radical voices, and there is also the tendency to use a token ‘dissenting voice’ to legitimise a system which is still deeply unbalanced.

Alternative political debate is generated online through Novara Media, Tribune and Jacobin. The Morning Star is the only left paper with a daily presence, and is now making an appearance in more supermarkets’ newspaper racks. But we are talking of a circulation of 10,000, as against the Guardian’s 126,000 and the Sun’s 1.2m. Meanwhile Momentum has been producing and distributing vital, eye-catching content – a popular audience watched many of its videos during the 2019 election, although that wasn’t enough to counteract a dedicated anti-Corbyn campaign from the mainstream media.

The Radical Film Network is a loose association which operates on a pluralist and decentralised basis. Over 300 affiliated organisations remain entirely independent and autonomous, while cultivating a renewed sense of community among both activist and experimental filmmakers, bringing political and aesthetic avant-gardes back into dialogue with one another.

Today’s new Left has typically achieved impetus and self-awareness as a movement outside the structures of established political parties or the unions: #metoo, Extinction Rebellion, Black Lives Matter, have all taken place separately and made forceful interventions with large scale impact. However the absence of an extensive, well-funded institutional space for film and programme-making which develops debates within and between these movements is a serious shortcoming. The creation of loose creative alliances of individuals and groups working without a dominant political party needs more sustained media space to develop their impetus into deeper and longer-term hegemony. Despite the moment of severe setback as the shift to the left in the Labour Party has been strategically counteracted, there are signs of regrouping and movement – a relapse is not a collapse and does not have to be permanent.

The revival of radical media through the creation of loose creative alliances of individuals and groups has the potential to create the crucial media space for debates on the left. ­­­­­­­­­­­­­­­­­­­To renew socialist film production these days, new networks need to connect with trade unions and the Labour party on a local and regional basis.

There is a historical precedent in the late seventies – the ACTT workshop movement built support through discussion with the Labour government, which led to the concrete proposal that small production units with permanent staff be funded on the basis of a programme of work that would be carried out over a number of years instead of funding for one-off projects. Funds for distribution would be included in production budgets and a circuit of small cinemas would be run by exhibition co-operatives. The development programme proposed that five new workshops would be financed each year for five years (four of each five to be outside London). After the abrupt end of the Labour government the infrastructure of innovative audiovisual co-operative units was sustained by Channel 4 and the British Film Institute.

Co-ordinated elements of the labour movement, for a comparatively small investment, could mount a very significant alternative challenge to the dominant media in a number of arts and cultural areas, drawing on the talents of sympathetic writers, film-makers, theatre-makers, broadcasters, and craftspeople. The broad alliances formed would include sympathetic unions and individuals working inside media – the NUJ and BECTU / Prospect, for example, would be important dynamic centres for organising such initiatives. The approach needs a pluralist basis with an openness for many different forms – multi-media work, films, podcasts and visual media to be taken to the public, even a presence in the streets with organised public art interventions for instance – ‘letting a hundred flowers bloom’ to use Mao’s famous phrase.

Furthermore, the pandemic has shown the possibilities for different ways of working. Remote working, utilising digital modes for meeting and communication, have led to a reconfiguration of the domestic domain as a space for work, education, creative activity, even self-realisation – a different use of time and relation between people. Individual participation through social media has developed the speedy production of short and witty forms of video.

New technologies offer the possibility of cheap and easily accessed image / sound production. While refuting the implicit exclusions held in the industry’s spurious notion of ‘professionalism’ it is always necessary to think of the audience – to make sure that films made artisanally without budgets can work for viewers who are used to the expensively made productions that emanate from mainstream media – radical productions made with minimum budgets can hold their own through invention, style and imagination. A reservoir of creative practice is available from new generations emerging from college and university courses – there are large numbers of young people who can work innovatively and make competent programmes. 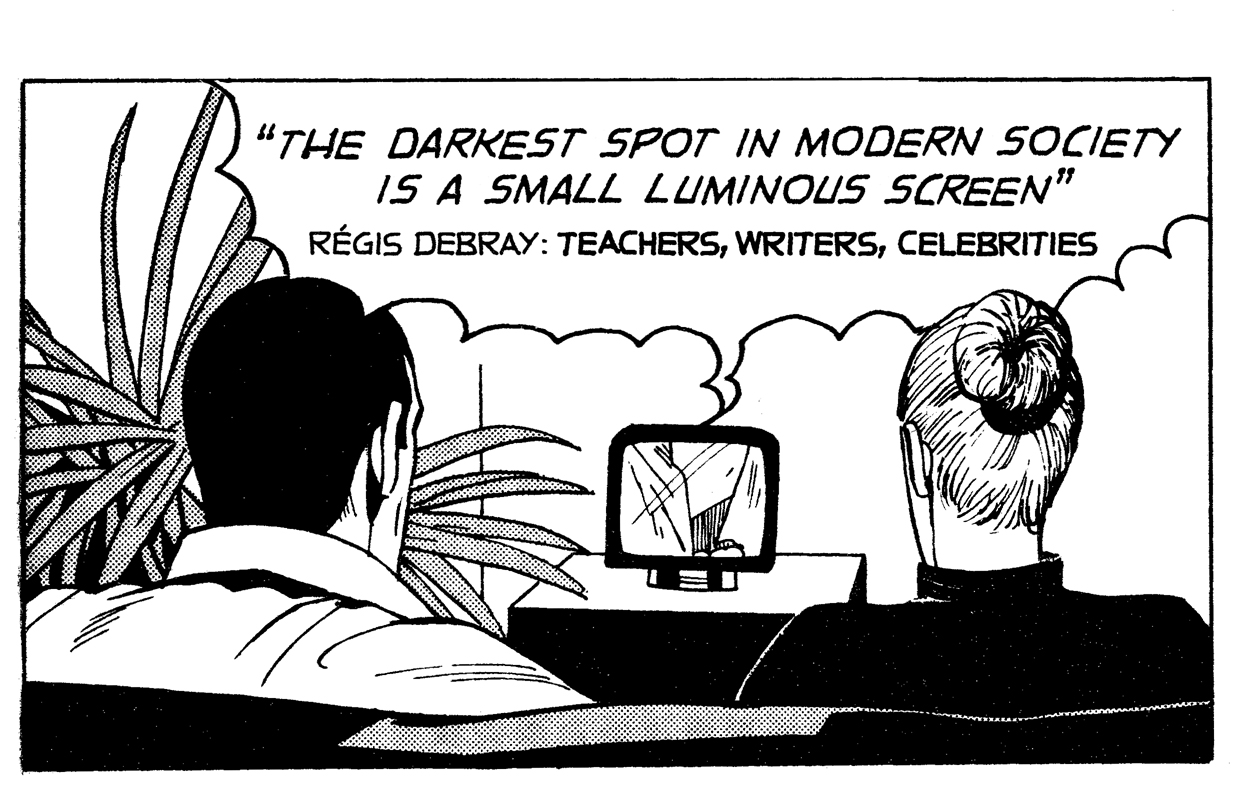 A crucial underlying change in the way we access the moving image is taking place which creates a timely opportunity for introducing radical media. Although traditional television is fighting to retain dominance in a dispersed market, it is now being watched alongside other content in a new non-linear way as, with the notable exceptions of news and sport and live events, new generations access what they want to watch online with divergent timescales.

It is important that a range of approaches to new productions – colour, music, art, comedy – play their part in any radical culture, to mix variegated forms of pleasure that reach parts that direct political address cannot. Key to building these media sources is distribution and marketing. Although being on the receiving end of the processes of selection and curation may be painful, they are necessary to choose and mediate the strongest new programmes. The London Film-makers’ Co-operative played an important role amongst the independent film sector in the 1970s and 1980s but its inclusive catalogue (anyone who wished to list films they had made could do so) made it unworkable. Folkscanomy is a current example in the Internet Archive.

In developing the new technological domain we should be wary of the ferocity and resilience with which the old system will defend itself. We see constant reminders in the political sphere, but the formidable power of the capitalist economic system also ensures that everything is reproduced in its own image – the idealism at the inception of the internet has been reduced to a situation where only Wikipedia, amongst the 10 most popular websites, is a ‘non-profit’ public service.

The fall of the Berlin Wall and the end of the Cold War unleashed the most virulent forms of neoliberalism including the monetisation and marketisation of education and health. It has also seen the release of commercial pressure on public service media, releasing market forces which act as a self-fulfilling prophecy, and in the longer term lead to new, blander, more conformist film and media configurations.

It is clear that the principles of Radical Pluralism and Direct Speech that were central to early Channel 4 are still relevant starting points from which to approach a very different state of affairs all these decades later. The former involved bringing a wider variety of voices from a progressive spectrum to bear, utilising different forms with different things to say, creating a debate around them. Direct speech was the effort to hear from communities and cultures while minimizing the processes of mediation by ‘television professionals’ from outside. From access programmes made by miners in Wales to African feature films, voices from at home and abroad had their own space. There was a move to shift the balance towards direct speech in all the genres of fiction and documentary – allowing greater access and interactivity.

It is important to support organisations and facilities damaged by economic meltdown, but the crisis saw the possibilities of state intervention opening out quickly and in an unprecedented way. The parameters of digital technology, mobilised in the calamity of a pandemic, remote working, non-linear viewing, in tandem with new modes of life and communication, can add to more confident prospects for the Left’s self-representation.

Continued efforts to influence existent broadcasters and help progressive views break into ‘fortress television’ can continue alongside the building of networks that can supersede the current system. The best examples of radical media from previous epochs indicate some of the brave prospects and possibilities that can be renewed and built upon.