Chris McGachy uncovers the full story behind Lennon’s donation to the workers as he transformed from affable moptop to militant activist following the breakup of The Beatles.

50 years ago – in the summer of 1971 – John Lennon was putting the final studio touches to his global anthem, Imagine. At the same time the Government announced the imminent collapse of Upper Clyde Shipbuilders. Within weeks defiant workers had seized control of the yards.

'Killed by capitalism': The UCS Work-in

The Upper Clyde Shipbuilders’ (UCS) stunning victory against Ted Heath’s Tory government in early 1972 has become the stuff of political legend. It was a time when ordinary workers and communities united in solidarity to demand the right and dignity to work.

With mass redundancies already on the cards, UCS shop stewards led by Jimmy Reid and Jimmy Airlie knew conventional strike action would not win this battle. Their ingenious idea was for the workforce to take control of the yards and continue to produce the ships for which the River Clyde yards had become world-famous.

On 30 July 1971, the famous work-in began with 8,000 men seizing control of four giant shipyards on the Clyde. Heath’s Tory government had come to power in 1970 refusing to prop up ‘lame ducks’. Cashflow issues at the Clyde yards early in 1971 had caused panic among creditors.

When Parliament heard on 29 July 1971 that liquidation was the only option, Clydebank was described as a town in mourning.

A devastated Jimmy Reid was haunted by memories of the 1930s, when three of his sisters died in infancy. It led to his scathing accusation they were ‘killed by capitalism’. That memory propelled Reid to life as a communist activist.

Perhaps the most famous supporters of the UCS were John Lennon and Yoko Ono, who sent red roses and a huge financial donation to support the workers struggling to keep Clyde shipbuilding – and their communities – alive.

From moptop to militant

On 25 November 1969, John Lennon visited his Aunt Mimi's bungalow in Bournemouth where he removed his MBE medal from her mantelpiece. Back in London, he dispatched his chauffeur with the medal to return it Buckingham Palace, in protest in Britain’s involvement in the Nigerian civil war and its support for the US in Vietnam.

It was one of many stunts Lennon and new wife Yoko devised as he stepped away from the lovable moptop Beatle and transformed himself into a celebrity activist with global appeal.

Lennon was liberated by the sudden death of stuffy, conformist manager Brian Epstein, and fired with radicalism through his burgeoning romance with Yoko Ono. He grabbed the chance to escape the claustrophobic rollercoaster of Beatlemania and touring.

John had a unique ability to compose global anthems, beginning with All You Need Is Love and then Give Peace a Chance. His songbook was adopted by peace campaigners and football fans alike.

Signs of a more political phase were also seen in his track, Revolution, and by publicity stunts such as a honeymoon ‘bed-in’ for peace reported by the world’s press to a global following. These successful publicity campaigns spurred John and Yoko to develop their radical agenda, assured of worldwide media coverage.

Lennon’s first solo album, including the track Working Class Hero, sealed the transformation. It was brutal and bleak, personal and political.

Power to the People

Since Revolution and the creation of Apple, Lennon had been forced to defend himself against criticism from left-wing radicals who viewed him as a capitalist sell-out. In January 1971 he invited Red Mole editors Tariq Ali and Robin Blackburn to his mansion for an interview.

It was Red Mole’s coverage of the UCS dispute which sparked Lennon’s interest in the Clydeside workers.

The next morning Lennon went into the studio and recorded a new political anthem: Power to the People.

A day after Lennon started work on his new album, Imagine, on 23 June 1971 around 100,000 Scottish workers downed their tools in solidarity with the UCS workers.

It was followed up the same week as the donation, with another half-day walk-out on 12 August by 200,000 workers – the largest Glasgow demo since the 1926 General Strike.

The joint stewards persuaded a mass meeting to reject a divisive government offer to save just two of the four yards. The workers held firm and completed a dozen ships before the government capitulated in February 1972.

Having originally refused a £6 million loan, Heath’s government agreed to invest £35 million to keep all four shipyards afloat, with only voluntary redundancies. Two continue to this day.

A spokesperson for revolution

It had generally been assumed that John and Yoko became aware of the dispute through television news reports.

But in his updated autobiography (Streetfighting Years), Lennon interviewer, Tariq Ali, revealed that it was his publication Red Mole which brought the UCS to the couple's attention. 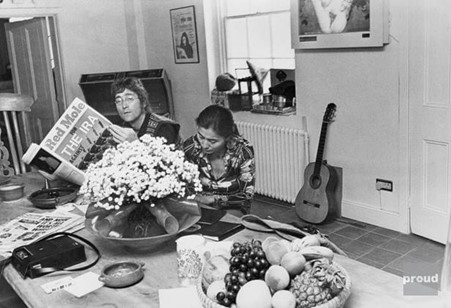 In his interview for the newspaper John explained that through his latest musical material he was trying to shake off the teeny-bopper image. The ex-Beatle confirmed he wanted to transform himself into a serious spokesperson for the revolutionary movement.

“I want to get through to the right people, and I want to make what I have to say very simple and direct,” he insisted to Red Mole. “I've always been politically minded…and against the status quo.”

In the first week of July 1971 – as Lennon flew to New York to complete Imagine with producer Phil Spector – Red Mole published a special issue dedicated to the Clydeside dispute.

Recalling the events of the summer of 1971, Tariq Ali explained how the UCS story in Red Mole had caught Lennon’s attention: “Our cover was a reprint of a 19th century caricature of a fat, ugly, bloated capitalist confronting a strong, handsome and noble-looking worker. He loved that cover more than the convoluted articles on the inside and later showed it to Phil Spector and others at Tittenhurst.” 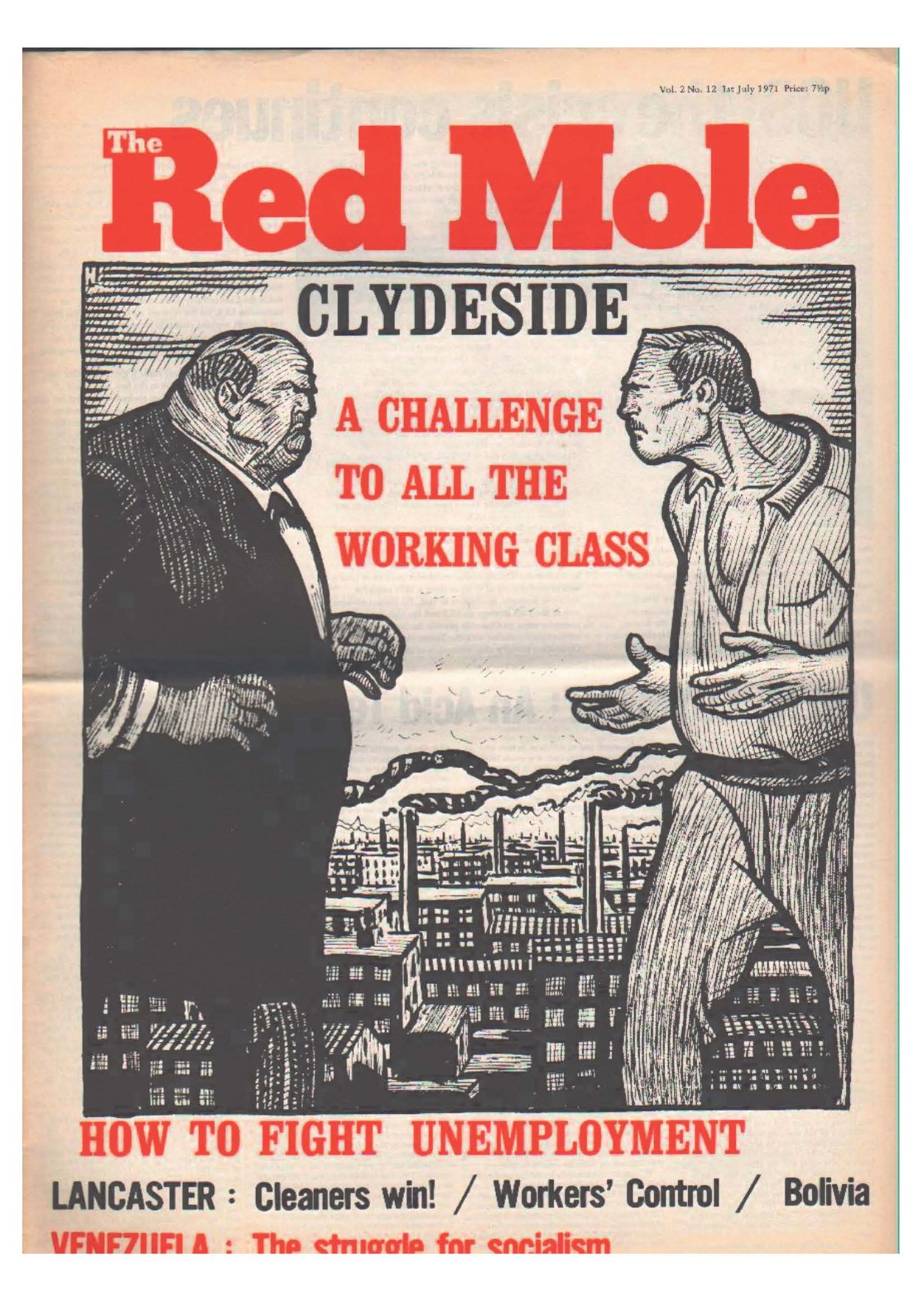 Undoubtedly inspired by the Red Mole cover and workers seizing control of the yards, on the 9 August John and Yoko sent a bunch of red roses which were delivered to the gate of John Brown’s shipyard in Clydebank. At the same time a cheque for £1,000 (worth around 15,000 today) was sent to the unions’ fighting fund.

Underlining his solidarity with the workers and their tactics, the dedication card repeated the lyric from his recent hit: “POWER TO THE PEOPLE with love from JOHN AND YOKO, AUGUST 9th 1971.”

By the end of the August, John and Yoko had flown to New York to take up permanent residence, in order to secure custody of Yoko’s daughter. He would never again set foot in England.

The dedication card became a rare and valued souvenir from this world-famous event sent by the superstar couple. Jimmy Cloughley was an engineer who was on the co-ordinating committee of the work-in. For many years this collectors’ item lay boxed among Jimmy’s papers along with his audio recordings of meetings, photographs and press reports. 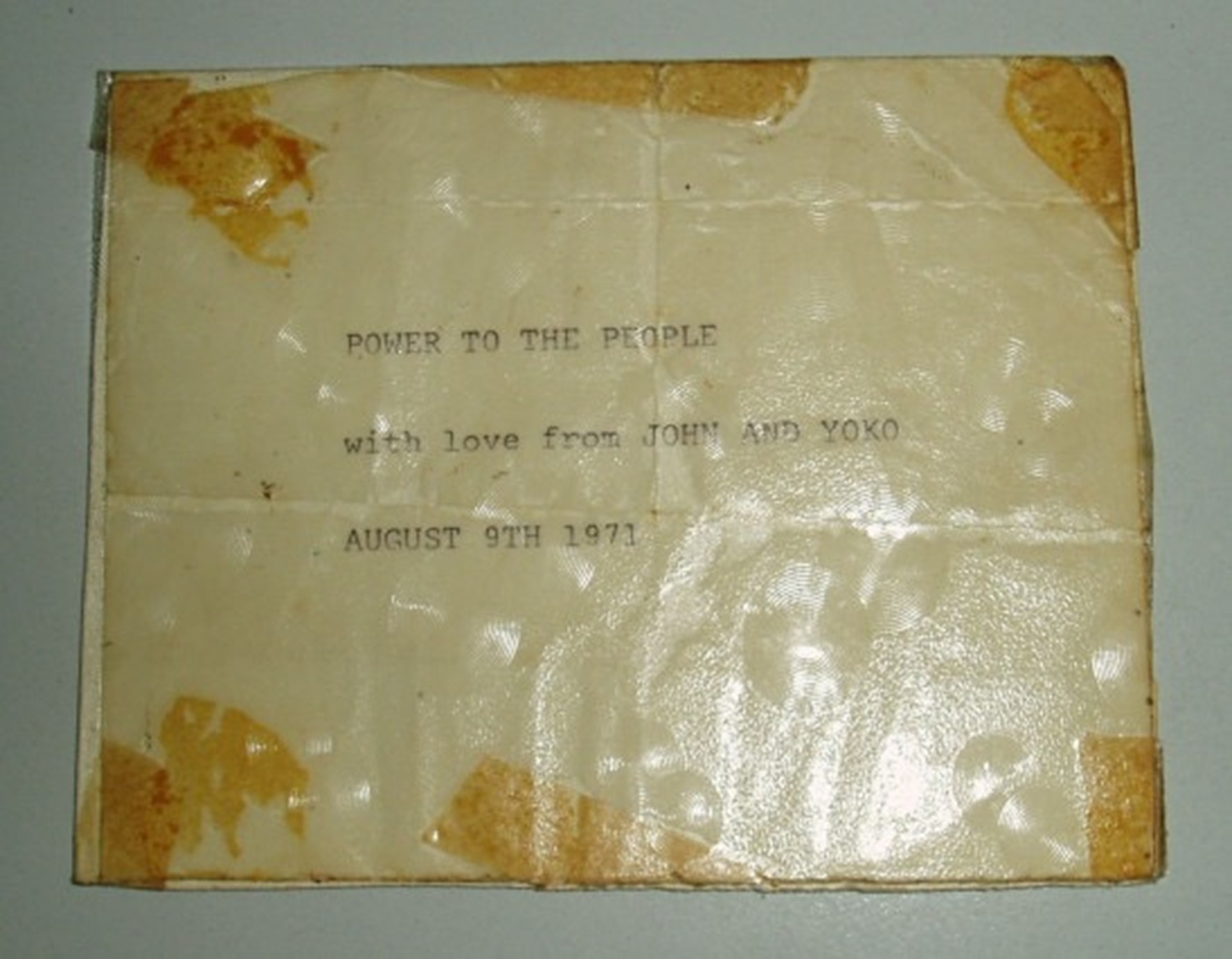 With many of those involved either elderly or passed away, a 30th anniversary exhibition was hosted in 2002. Jimmy Cloughley donated his personal papers, including John and Yoko’s dedication card, to a special UCS archive curated by Glasgow Caledonian University, where it remains to this day.

Recalling his deep connection with Lennon, Tariq said: “He wanted to leave Britain because he and Yoko were repulsed by its provincialism and by the tenor of tabloid racism that was directed against her. I last spoke with him in 1979 when we discussed the likely impact of Thatcher's victory. He didn't sound too unradical in that conversation,” Tariq tellingly recalls.

“Clearly, his views changed somewhat but I can't see him as a neo-con supporting the wars and occupations in Palestine, Iraq and Afghanistan. The loss of his voice was a tragedy for millions.”

And in this world of war and global injustice, both men remain icons and rallying figures in the respective worlds of politics and music, working-class heroes whose lives have touched me and many millions of others – all the more today as our heroes are dead and our opponents are in power.

Read the full story and multimedia timeline at www.globetrotsky.com/lennon.