To mark the anniversary of the birthday of Rosa Parks, Phil Brett examines the impact of Civil Rights militancy on the sleeves of soul and funk albums.

In Wearing Their Politics on Their Sleeves we looked at how the growing Civil Rights Movement in the USA had influenced the design of jazz album sleeves, here we shall do likewise for their nephews and nieces - soul and funk albums. 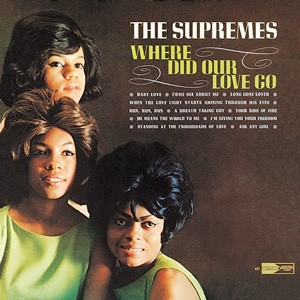 Perhaps surprisingly, soul music took a while to reflect the social upheavals occurring in America. Berry Gordy's Motown Records strictly avoided politics, focusing on the traditional staple of love and romance. Their record sleeves, like their rock 'n' roll siblings, would be in the main, brightly covered affairs with the artist central to the design, usually smiling, with arms outstretched. But their wider impact should not be underestimated. The Civil Rights Movement had opened up a space for black music to gain a larger audience, but the musicians themselves, even with such successful labels as Motown or Stax, still faced a segregated world, just like the black members of their audiences. They might share desks at the Stax Records HQ in Memphis, but they couldn't share lunch counters outside. One should remember that it was not until 1967 that the Supreme Court stopped laws prohibiting interracial marriage in the USA.

Groups such as Diana Ross and the Supremes were not political in the implicit sense, but often the context of culture is important. Where Did Our Love Go reached number 1 in 1964 (following Motown's first top spot - Mary Wells' My Guy). This, in a country where in some states you would go to prison for 12 months, if your love led to marriage, and you were black and he was white. Motown was young black America asserting itself. Reaching number one, crossing racial  lines, it was - whatever Gordy might want - a cultural act of assertion and subversion, to a bloody great tune.

On the album sleeve, the three women have the style, sophistication and class Motown strived for. To America, in 1964, rife with racism, with a good percentage of white Americans seeing black people as little more than savages, this sent a powerful message.

The struggle impacted across numerous different cultural lines. In less than a decade, politics were implicitly finding themselves into the music. The seminal albums of What's Going On (1971) by Marvin Gaye and Innervisions (1973) by Stevie Wonder set the standard. The American dream was becoming recognised as a nightmare for many. 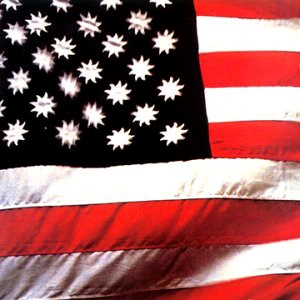 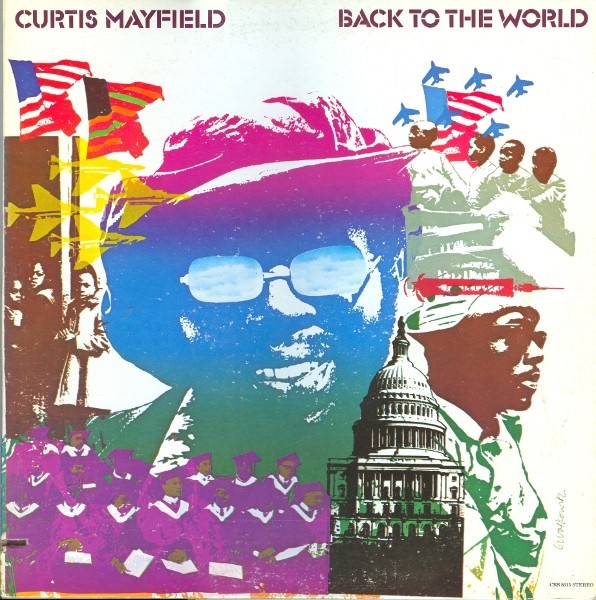 Both the albums pictured above use the Stars and Stripes to question what exactly there is to be patriotic about. Indeed, is it possible to be highly critical of one's country and still be patriotic? The Sly album is only the flag, but the blue is now black and the stars are suns. There was no mention of either the title or the band (although the label insisted on a sticker). If John Berg's sleeve design is rather opaque, then Mayfield's is a little more obvious, with images of children and hustlers, jet bombers and the White House. Jerry Wollkowitz, who made the montage, is asking us what kind of world is the Vietnam veteran in the title track returning to? 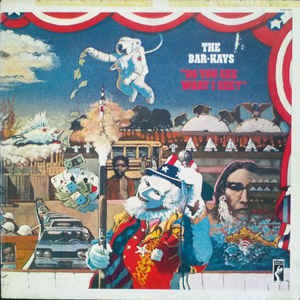 Montage has often been used to make social comment. The Bar-Keys Do You See What I See? (1972) used images from United States culture, making it look like a grotesque circus. And in doing so, like the Curtis Mayfield album, matched the lyrics of its title track. From the early days of merely plonking the singer on the cover, artists were now seeking to reflect an image or a message. The sleeve had become more than something to keep the record safe and clean - it could also convey ideas. 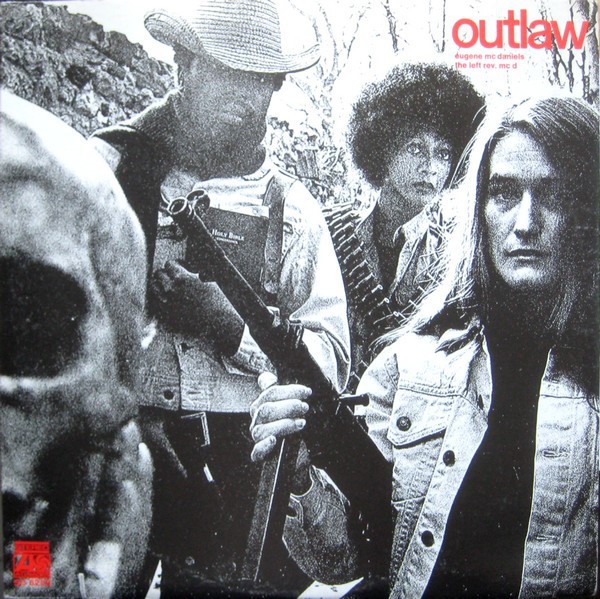 Some weren't that subtle. Gene McDaniels had been a crooner in the early sixties, but after the assassination of Martin Luther King exiled himself to Denmark for a year. Mass action can change millions of people's ideas and McDaniels is but one example. He came back, wanting to be known as Eugene McDaniels. A change of name brought a whole change of lyrics, including writing Compared to What (the live recording of which, by Les McCann and Eddie Harris is possibly one of the greatest ever songs recorded). His first album on his return was Outlaw (1970) with the cover screaming urban guerrilla, a counter-culture at war with the establishment. 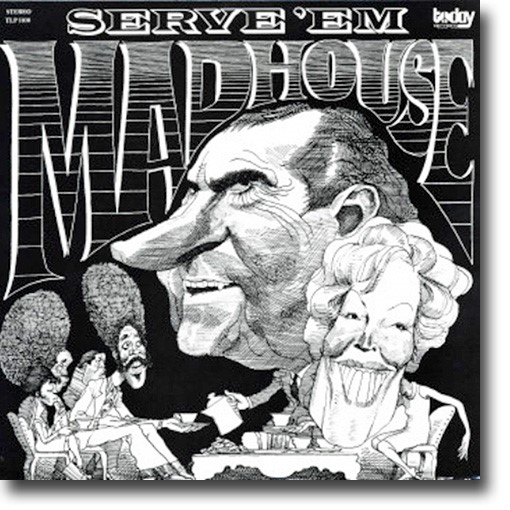 The sleeve of Serve 'em (1972) by Madhouse also pulls no punches, with its satirical cartoon clearly showing the huge and mutual mistrust between President Nixon and the black community.

The wind of change even reached the more polished Philly sound, shown by these two 1973 albums show graphically. Both were made under the art direction of Ed Lee. The O'Jays album has a painting of a slave ship, illustrating the title track. To quote the Greatest Covers of All Time: "It was enough to make even the most myopic of white music fans take note that something was changing". This was released six years before the publication of Alex Haley's Roots. Not that the artist, James Barkley, was famed as a militant, he was better known as a children's book illustrator.

Bart Forbes, the artist for the MFSB album, was also not known for being a leading light in the counter-culture. His art was usually not so much strident graphics as a popular illustrator for Sports Illustrated, and was more used to drawing baseball stars than this kind of nightmarish drawing, including demonstrators, swastikas, skeletal soldiers, an atomic bomb cloud and the Klu Klux Klan. Interestingly, both artists had also designed U.S postage stamps! If militancy was affecting such previously soul pop groups such as the O'Jays and MFSB, not to mention illustrators such as Forbes and Barkley, then the mainstream had certainly shifted leftwards.

Positivity jumps out of you from Funkadelic's Uncle Jam Wants You (1979). Here the message remains serious but has a humorous twist, with George Clinton adopting a pose made famous by Black Panther Huey Newton in his iconic 1967 photograph. Referencing Black Power, still something feared by the white establishment in 1979, but doing so in platform white boots! Clinton's various projects (Funkadelic and Parliament for example) were full of glitter and showmanship, but with glorious funk, and very often with serious themes. Rather like Sun Ra in the jazz world, it seemed convenient to escape the world in order to comment on it. Diem M. Jones, who took this photograph, was also the designer who worked with Clinton and was integral to the music, putting Clinton's ideas into visual reality.

Here's another example of the singer adopting a powerful leader pose. Moses had always been an important figure in the Black American struggle, with his connotations of leading a people from captivity into freedom. The Isaac Hayes album Black Moses (1971) had a gatefold sleeve featuring the singer, full length, arms spread.

The photographer used for Black Moses was Joel Brodsky, someone with an impressive pedigree of covers including Van Morrison's Astral Weeks and the Doors' debut album. He was also responsible for the Impressions' Finally Got Myself Together (1973) album showing the band out on the streets. Racism in the USA went far beyond segregation in the South. The brutal fact was that in the richest country in the world, there were urban ghettos of severe poverty throughout the country. Soul and funk musicians began to use ghetto imagery to make the point that even with the removal of segregation laws, black people still suffered chronic discrimination - something we see today with hip-hop and rap music.

On the cover of Keep on Steppin' (1973) by the Fatback Band there is a young girl dancing in front of a wall which has the band name and album title written in graffiti. It is simple but effective, and in the music writer Lloyd Bradley's view is "Probably the greatest album cover ever..... this typifies a trend in 1970s funk, whereby the sleeve represents the music rather than the band."

Sadly, women on many soul and funk albums, as with rock albums, have often featured on album covers merely as semi-pornography. The 1978 self-titled Taste of Honey debut is rather different. On the cover are bassist Janice Marie Johnson and guitarist Carlita Dorhan, with their instruments. This was at the time when punk and post-punk female musicians were trying to kick down the doors of male dominated rock (see No-one's Little Girl). Johnson and Dorhan, may be wearing elegant dresses rather than leather jackets and torn jeans, but there is no doubt from their look and camera angle that they are no mere adornments. These are two black female musicians asserting their confidence in both their musical ability and who they are. By the late seventies militant funk was being replaced by disco, but the struggle had had a widespread affect. The emphasis might be on dance, but this album cover also radiates pride.

Waves of political struggle are like tsunamis against the ruling class and their prevailing ideas, and they also send ripples also across the world of popular culture. Anti-Vietnam protests, the Civil Rights movement and the women's movements shook the American establishment. It also  helped create not only great music, but alongside it, marvellously evocative album art.

Rosa Parks, with Martin Luther King in the background