David Russell is a writer of poetry, literary criticism, speculative fiction and romance.

With this book I feel that I am confronted by a category-breaker – a work that bridges the gulf between the passion of poetry and outrage, and the analytical precision of a major historian and political theorist. I have always associated the term ‘shabby-genteel’ with relatively impoverished members of the upper middle and upper classes. With his semi-title poem, 'Shabby Gentile', Alan significantly shifts the focus of the term. His cleverly coined title suggests a bonding of Rabbi with gentile (non-Jew). Indeed he explores the Jewish theme in some depth. In the accompanying illustration, the prime sufferer wears the Star of David, with a modified legend: ‘Dole Jude’. He highlights those with ‘tunnel vision’, who have no sense of irony. Reactionary attitudes to social mobility are one of his targets: 'He admires and aspires to the self-made man/Who’s helped himself up with invisible hand/Then kicked away the ladder — legerdemain . . .' His generic figure passes the buck, shrugs his shoulders – 'washes his hands of Pontius Pilates'.

There are some brilliant and incisive rewrites/parodies of our jingoistic odes, truly putting our ‘heritage’ under the arc lamp of stark contemporary reality.

'¡Viva Barista!' is a bitter indictment of safe, censored debate and discussion in the café environment. It refers to the fashionable impact of the film Viva Zapata! Featuring Marlon Brando. I was highly struck by the description of the Espresso dispenser as a Hydra. He refers to the ‘poison of public opinion’. Coffee is the true opium of the people, and its dispensers ‘an embodiment/Of liberty in lubricated labour’. 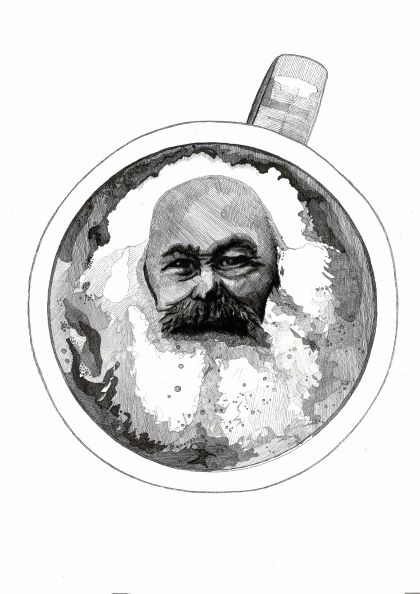 'Wood Panel Parliament' uses the imagery of organic rot, woodlice and decay to highlight parliamentary corruption, and applies organic analogy to money-laundering: Catch the frantic scratch of pens in chequebooks: 'The sound of Parliament dismantling—/ Democracy’s swine impaled on meat-hooks'.

'Common Music' paints a sound background of the concomitants of hardship and oppression. This is an excellent counterpoint to the benign interface of today’s ‘state-of-the-art’ buskers with their portable amplifiers and frequent backing tracks – the ‘under-layer’ of music, with the ‘subliminal messages’ of the stark truth. Interesting reversal of the concept of reification (‘objectification of the subject’): 'commodities impressed upon us/Are depicted with human personalities,/Anthropomorphised, promoted instead of us . . .' Entfremdung – that Brechtian term resonates on; it is the basis of awareness, of clear thought. It attacks the bogus charisma of demagogues: 'Brutal solutions marketed as miracle cures/With the quickness of quackery to obfuscate/Long-term impotence . . .' Ironically, this poem refers to ‘Rough Music’ – the malific counterpart of ‘Common Music’. He gives a dire warning to 'tarnished minds/That closed themselves to the warning signs/Of what they were becoming'.

'The Battle of Threadneedle Street' has an apocalyptic feeling totally in keeping with the chaos of Brexit: ‘the Royal Bank of Babel’s vacated altars’. There's an interesting comparison between Thatcherism and the Tsarist regime in Russia, vision of totalitarian brutality: 'A hollow tortoise-shell of transparent shields,/Shin-licking truncheons and electric-crackling tasers'.

'Thirties Rut – Clocks Back Britain' makes a flashback allusion to the Depression in the 1930s. It presents, in stanza form, the worst right-wing propaganda, punctuated by the refrain: 'Lies told for long enough become the truth they say;/Even a stopped clock shows the right time twice a day.' A final, bitter litany for the hollow ‘Little England’ mentality of the Brexiteers. This issue gets a more specific focus with 'Blood of the Dole' – on the lack of proper welfare provision for the wounded of World War I – ‘brushed aside as a bankrupt economy almost.’

'Times New Roman' – an analogy between recent chaos and Nero’s complacency, the ostentatious athletics of the Olympiad are set against the hobbling struggles of the deprived and disabled – a grotesque extension of the ‘bread and circuses’ principle.

'Not Paternoster Square' diagnoses the decay and rot of our society: 'A cash-strapped Capital in spectral taxes,/Encrusts its subterranean arteries of punctured/Under-lungs with atmospheric residues . . .' –the putrefaction behind the pomp and ceremony! A culture in decline: 'Draped to shabby pageantries of down-at-heel/Genteel Something will turn ups singed/Into nicotined samplers’ dog-end genealogies.'

The poem is in honour of the Occupy St. Paul's camp of some years ago. It hones in on the hypocrisy of high finance: 'A crouching Exchange that pretends not to be there,/Where Exchequers square indulgences/For patronage in currencies of green benches . . . A cash-strapped Capital in spectral taxes,/Encrusts its subterranean arteries of punctured/Under-lungs with atmospheric residues/Left behind from centuries of symbolic ceremonies,/Occulting rituals, public mimes...'. The shoring up of archaic antiquities is largely a parasitic growth. But Morrison is also critical of archaic, once-fashionable, 'armchair' socialism: 'Furniture tented in linen palls to guard against/Gradualist dusts — mothballed in Fabian platitudes . . . snookered Trotskyite/Resigner lenses, Bolshevik bifocals/Blurred by symbols of lugubrious God-Builders'.

There's a graphic portrayal of the protesters camping out, as there is of the street homeless, who do so involuntarily: ‘Those cowed, deciduous souls.’ The historical continuity of poverty and oppression is encapsulated in phrases like ‘Nosterity’s Moratorium,/Dickensian chic of Pecksniff’ and ‘the great unwashed’. The protesters are physically set against the background of a venerated, but not quite untarnished monument: 'Warped windshielder for a Vatican of Capital . . .' Society’s palliatives are shown up in their true colours: 'By synthetic cousins cushioning our deficits/Of spirit: a nation’s toxic upholstering on Antidepressants…'

Boris and Nigel are appropriate targets. The poem puts out a relentless barrage of the abuses of the world, but does not flinch from their complications: 'Scrape salubrious asylum from valorised/Jerusalem’s sieving visitations'. There's a great organic analogy for politics and economics: 'prime sprawl of pawn-Brokered democracy’s Stockholm syndrome…' There's also a pertinent comparison of the damage caused by WWII air raids and the wreckage of the Welfare State. An encyclopaedia of contemporary evils – ‘retro design classics, endlessly recyclable . . . Bottle tots weaned on Methadone’s green milk —' show the plight of the homeless and the desperate struggles of the caring agencies: ‘patched-up quandaries/Of choked community outreach . . .’ But Morrison can feel some measure of optimism: '. . . a sea-change/Is brewing, the ectopic pulse of fellowship . . .' Physical and economic parasitism: ‘Capillaries siphoning patriotic profits offshore . . .’ He shows the desperate, sordid congestion of Inner City commuter traffic. Analogy between Christ and the Homeless: ‘an origami/Crown of thorns sculpted out of claim forms/And lacerating edges of tan paper envelopes'… 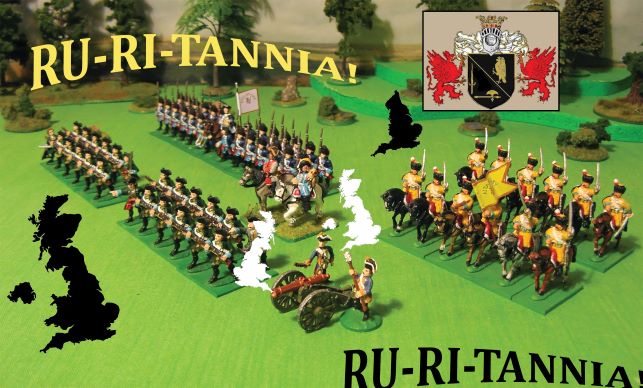 'Ru-Ri-Tannia' is a searing rewrite of 'Rule, Britannia', laying bare the utter hollowness of ‘little England’ jingoism of a ‘tin-pot kingdom’. There are superbly ironic takes on the attitudes of the prejudiced: 'Brussels sprouts bureaucrats all mashed up,/Tipped out of the frying-pan into the camp fire'. Through Brexit, the UK is about to pack up its trunk 'with a trumpety trump'; and Trump also gets short shrift in 'Drain the Swamp'. Titular and satirical reference is made to Swift’s Modest Proposal – that brilliant ironic prophecy of ‘ethnic cleansing’ programmes prevalent in subsequent history’ in the prose piece, 'A Modest Proposal from the DWP': 'there does need to be some sort of final solution to the perennial societal problem of malingering incapacity . . . the whole process of trying to support the sick and disabled through the welfare state and a bureaucracy of bleeding hearts is just prolonging the agony'. 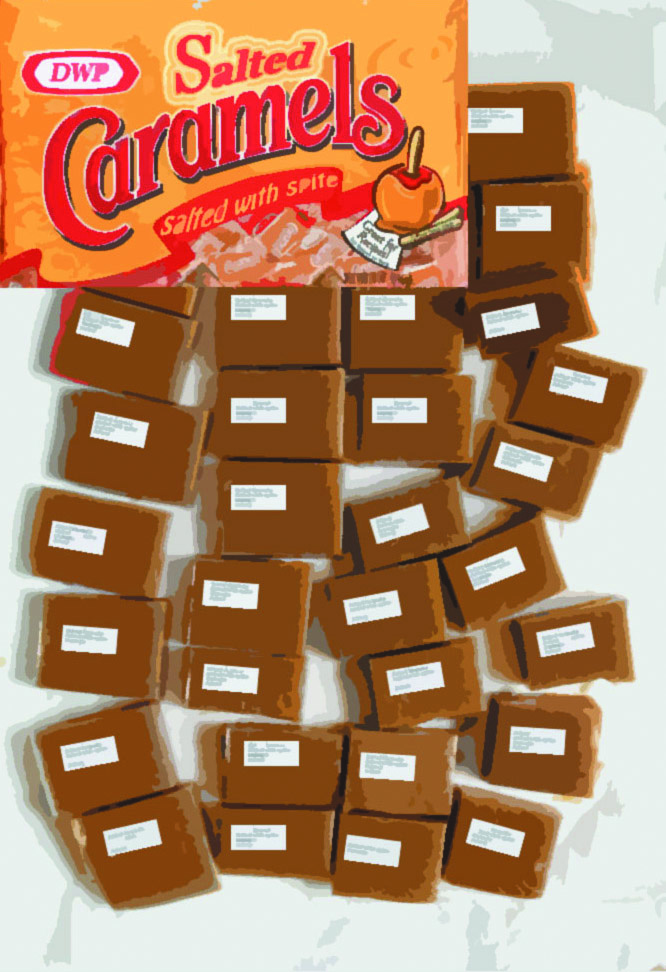 'The Pigeon Spikes' highlights the oppression of the homeless – '. . . So man and pigeon cooperate – pitch in together', to make an ugly, surreal combination: 'human head/And shoulders for perches, mangy pigeon/Plumage for feathered umbrellas . . .'

'Kipling Buildings' is a cogent reappraisal of Rudyard Kipling’s If – a mainstay of our so-called educational system – which glorified uncritical toil. In Morrison's version, the subject is the sufferer rather than the purported doer who has undergone an intrusive work capability assessment. 'Work' protests strongly against blind servile toil. There's a further gloss on Kipling with 'Rudyard Digs' – acerbic wordplay on overcrowded, sub-standard accommodation.

In 'The Bricks of Henrietta Street', Morrison reaffirms his faith in the old Left Book Club ‘think tank’, promoted by Victor Gollancz and flourishing in the 1930s: 'in the Noughteens — retro-twinned /With the Nineteen Thirties— print-antidotes /To right-wing hegemonies are returning.' A salutary catalogue of those radical publications.

'Claimant Christ' presents a parallel between the Claimant’s sufferings and Christ’s rejections during his lifetime. The powers that be ‘know not what they do’ – or do they?

Some interesting cross-cultural reference in 'Zaghareet': a zaghareet (also known as an ululation) is a loud trilling . . . a combination of a high pitched, quite loud, shriek as well as the 'loo loo loo loo' trilling of the tongue layered on top. The sound is made in celebration at weddings, births, and other auspicious events. Women usually cover their mouths while zaghareeting – some say this prevents evil spirits from entering; others say it's to be polite and hide your open mouth. It is an expression of joy, excitement, encouragement in Arab culture. It’s totally welcome to do when another dancer is on stage, also in a Zaffa (wedding parade in front of the bride and groom). It lends an air of excitement and charges the room/dance with a lively electric current.

Jeremy Corbyn gets substantial coverage here. 'The Problem with Jeremy' relates his ‘unpopularity’ to his outspokenness. 'St. Jude & the Welfare Jew' exposes the myth of the so-called ‘free press’. In reality it is a sedative: '. . . the press keeps us/In perpetual presentness as a surplus/Populace of shopaholic schizophrenics . . .' The grisly mental scenario is given, appropriately, a backcloth of climatic disasters. One cannot help but feel that these two areas are in some ways related – ‘meteorological agitprop’ is a great phrase, as is 'we vote with our weathervanes'. There's an attack on apathy: 'Comfortable/Glumness in our bloated sofas'. St Jude, as Morrison explains, is ‘the patron saint of lost causes’; sometimes he is also considered a curse, a bogey-man. The term also refers to a gale force wind, such as afflicted Britain at the end of the 80s – severe, but ‘not a hurricane’. Morrison also attachs the neo-fascism of the Daily Mail.

'Waiting for Giro' uses the template of Samuel Beckett’s seminal play as a polemic on unemployment. Getting over boredom through an excess of it is an interesting concept. 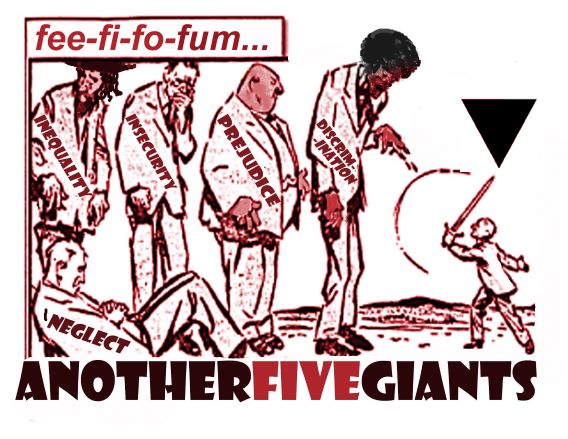 'Another Five Giants' makes a panoramic survey of the Welfare State, including criticism of the ideology behind the original Beveridge Report. Beveridge admitted his ideology was ‘eugenic in intent’. Contrary to popular belief, it had elements that were insidious, malignant: 'its compassionate camouflage/Of gradualism that besotted/The bourgeoisie of an entire generation'. He referred to “Five Giant Evils” — Want, Ignorance, Disease, Squalor & Idleness'. Morrison is rightly critical of his criteria: ‘Ignorance’ can be the result of poor schooling, and ‘Idleness’ may not always be self-imposed. Now the old giants have been replaced by the new ones of ‘Neglect, Inequality, Insecurity, Prejudice and Discrimination’ according to Jeremy Corbyn.

Morrison adds on 'Five Shadow Evils': ‘Spite, Scrounger-Mongering, Stigma, Judgementalism and Resentment’. Morrison also cites Lloyd George's earlier 'Four Spectres', rhetorical precursors to Beveridge's 'Five Evils'. The formation of welfare structures is given good coverage, as is their subsequent decline and dismantling: 'this beneficent safety net has been steadily/Unthreaded through the decades post-’79.' Occupational Health Doublespeak brings Orwellian prophesy right into the here and now, with all its lame excuses for benefit cuts and psychiatric closures; the cynical appointment of dubious private companies to ‘rationalise’ the system. Brutal privatisation is laid bare. The press is acknowledged as more powerful than politicians in shaping public opinion.

The Notes to the poems are impeccably thorough – worthy of any treatise on politics/economics. Morrison has acknowledged his debt to The Decline of the Welfare State by Coates and Silburn. Shabbigentile is no ‘easy read’: rightly so, because it embraces the tortured complexities of all the gigantic issues involved. It gives poetic tension to painful public issues. It radically challenges the boundaries between so-labelled ‘Literature’, ‘Poetry’, ‘Politics’ and ‘Economics’. It should be read, marked, and inwardly digested by all parties, in all those areas.

Shabbigentile is available here, or you can obtain a signed copy from a special limited edition here.