Rebecca Lowe is a journalist, poet and Quaker peace activist, based in Wales, UK. She is a Bread and Roses Spoken Word 2020 Award winner, has appeared on BBC radio, and her poetry has featured in many anthologies including Red Poets, Blackheath Countercultural Review, and the Ymlaen/Onward! anthology of radical Welsh poetry (Culture Matters, 2019).

In December 2018, Ian Lewis, a steel worker from Port Talbot in South Wales, woke to an early Christmas present – an artwork by world-renowned street artist Banksy had appeared overnight on his garage.

Season’s Greetings, as the painting was officially named, is painted on two sides of a wall. One side shows a child playing in what looks like snow. Turn the corner and the ‘snow’ becomes falling ash and smoke from a skip fire.

Mr Lewis’ garage became an overnight tourist sensation, hitting national headlines, as crowds flocked from all over the country to see it.

What follows is nothing less than a salutary lesson. It quickly became clear that the artwork needed protecting. Amid fears of vandalism, fencing was installed, together a screen in front of the wall. Security guards were stationed at the entrance, together with parking attendants.

Next came the news that John Brandler, an Essex-based art dealer, had bought Season’s Greetings for an unspecified six-figure sum, despite not having seen the painting in real life. In May 2019 the piece was moved from the Taibach garage wall to Ty'r Orsaf, the site of the former police station on Station Road, where it was safely positioned behind panes of reinforced glass.

This month came the disappointing news that, despite the townsfolk’s best efforts to keep the artwork in the town where it was created, it was to be rehoused at a gallery in England. Apparently, Mr Brandler had plans to eventually create a street art museum in the Banksy's new home, Ty’r Orsaf, featuring other world-renowned artists. But in June 2019 he scrapped the idea after the cash-strapped Council refused his demands to pay a yearly fee of £100,000 for the loan of the artwork.

So that’s that, then. An artwork which was gifted to the city – and which arguably only makes sense in the context of its original location – is to leave Wales, possibly forever. Capitalism commodifies everything – skills, time, land (I recently read of The Adam Smith Institute’s plan to sell shares for plots on the Moon) and, yes, Art.

Determining the price of a piece of art is a tricky one. Who decides whether Tracy Emin’s bed is art or just…a bed? Or whether a cow pickled in formaldehyde is worth as much as an Old Master? Such decisions often feel arbitrary, based more on reputation than Skill. Even artists play this game. Salvador Dali famously avoided paying for drinks in bars by drawing on the backs of his cheques, making them priceless works of art and therefore un-cashable.

Artists, of course, deserve to make a living. It’s not unreasonable to charge prices that reflect the time, effort and skill required to create something beautiful and unique. The problems arise when collectors and dealers move in, and art becomes prized more for its perceived monetary value than its intrinsic worth. (Banksy, of course, famously played with this concept with his ‘shredded picture’ stunt at a London auction house).

Who determines what a piece of art is worth? A few years back, I bought an original painting for a fiver in my local charity shop. I bought it because I liked it. I’ve no idea who painted it. If tomorrow I was to discover that it was the work of a famous artist, nothing materially would have changed. The painting would be exactly the same as when I bought it. The only difference would be the market value, but the artistic value – the reason I bought it – stays the same.

Street art, by its nature, has always been ephemeral. Images and tags appear and disappear. Unlike the carefully curated art in galleries, historically Street Art has been egalitarian – anonymous or semi-anonymous, created purely for freedom of expression, with no intention of material gain. In a world where so many are made to feel invisible and worthless, it’s a way of rising up through the cracks, a two-fingered salute at the world – a way of shouting ‘I Exist!’

When does Street art become Established Art? A few years ago, Swansea Council, in their wisdom, decided to paint over a Cofiwch Dryweryn mural which appeared on the marina wall – arguably just as strong an artistic statement as the Banksy. When is an artwork deemed graffiti? When the Council considers its message too political? When it’s not judged to be in keeping with the tourism aesthetic of the area? When it poses a threat financially?

Banksy’s ‘Season’s Greetings’, too, was political. It was a statement about pollution, about the town’s industrial past (and future). A statement about how the ugliness of industry can, when viewed through innocent eyes, appear beautiful. About the legacy of a town which in 2018 was listed as the most polluted area of the UK, yet relies upon industry to feed its children. And it’s a child, significantly, who appears in the mural – a symbol of the town’s future, appearing at Christmas when the symbolism of Nativity, and of lost childhood, is at its most redolent. Above all, I think, it is a symbol of hope.

It’s easy to feel hopeless, as the town’s Banksy is lifted onto a crane to begin its long journey to a gallery miles away in England. It’s easy to feel frustration at an opportunity missed. Yet, amidst it all, there is hope. Banksy’s gift to the town has inspired the Port Talbot ARTWalk – a coming together of artists from across the town and farther afield, both known and unknown, to create a stunning walkway of murals and street art.

The ARTWalk is, of course, free for anyone to enjoy. Amid the gloom of a steel-grey February sky, these colourful, rebellious swirls of colour are a joyous shout to the world: We are here, we are the voices of the town, and we are not going anywhere.

As a community, we will move forward. The fact that the Season’s Greetings artwork is not with us anymore – is that really so important? The mystique about the artwork will remain with us for all time in our town, regardless of not having a piece of wall. The story of the Port Talbot Banksy is part of who we are, the people and the passion of Port Talbot. It stays in the hearts of the people of Port Talbot and that, that cannot be taken away by money or profit. We are the winners, not art dealers. Money is okay for some, but the legend of the Port Talbot Banksy holds far more riches than money can ever, ever buy…And that my friends…is priceless.

So the commodification of Banksy’s Season’s Greetings has, in fact, achieved just the opposite. Rising up from the streets is unbridled freedom of expression – uncommodified, de-monetised, freed from the shackles of galleries and dealers. This is Art for Art’s sake. I reckon Banksy would be proud. 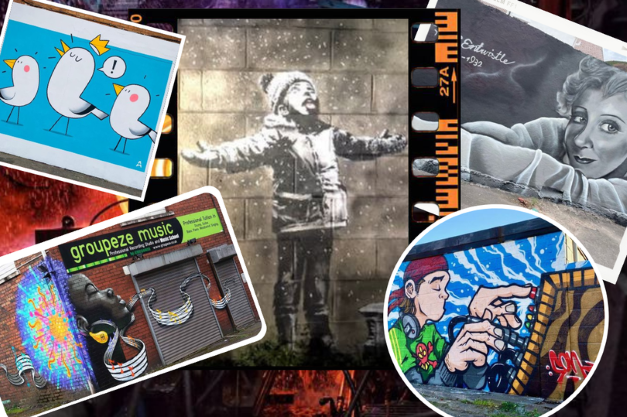 Poverty is relative
only for the rich.

Try telling the woman
queuing up outside the foodbank
that poverty is relative –
She has spent half a day
and most of her remaining cash
getting on and off of buses
to reach the benefits office
to be told that due to a ‘technical hitch’
her universal credits payment
has been delayed –
It’s raining,
The baby in the pram yowls,
She yanks down her hood,
hoping nobody will see her and judge.

Like, it’s relative
not to care about buying fairtrade food
to help the starving children in Africa,
like the smiling church lady said you should,
when you’ve five children
of your own at home
going hungry.

Like, it’s relative for the woman
behind the benefits counter
on a moderate income
to close down her computer
at the end of the day
and go back to a decent meal
and a warm home.

Like, it’s relative
for the politician who declares
there’s no need to increase the
basic rate of universal credit
because ‘£85.68 a week is plenty’,
then treats his colleagues
to a meal and a £100 bottle of wine.

The myth of the trickle-down economy,
Money leeching up from poor to rich,
Lining the pockets of greed:

‘But I worked hard to get where I am today’

Tell that to the nurse on basic wage,
who today held the hands of a dying woman
and learned that her work is not worth
more than a one per cent pay rise

Tell that to the single mum working
three jobs to pay the rent on a flat
with mould growing up the walls.

When the camel finally manages
To squeeze through that needle,
I might just believe it!

'After the first, it becomes easier,'
The cold, wild-eyed stare of the deer,
A crazy fish-eye lens looking backwards
through terror - you shiver,
You are only twelve years old
and know what's coming,
You've seen it before,
A fistful of blood on your face,
Still warm, from the dead beast,
The violence of your father's pride,
You smile, trying not to retch -
A rite of passage -

'After your first, it becomes easier',
Easier to stand on the side
of the strong, and so you become
the hunter, not the quarry,
Learn to inflict pain
quickly and humanely,
Learn to look away,
And never catch
Another's eye -
A rite of passage -

The image above is Walter Wolfgang's Banner, by David Hugh Lockett