Mark Perryman of Philosophy Football criticises the commercialisation of football, and explores the possibilities of fan culture as a social movement.

During the international break, a mini-spat over the England players’ pride – or lack of – in wearing the three lions on their shirt, provided a helpful starting point towards the remaking of football as a social movement.

Explaining England’s inability to go even 1-0 up against the proverbial minnows of the Maltese football team until well into the second half has a lot less to do with the lack of emotional commitment from Harry Kane et al to end now more than half-century’s worth of years of hurt, than their actual inability to play.

‘Pride’ is the easy cop-out – what we’re actually witnessing is the ever-decreasing quality of English football. How many of England’s starting eleven would Paris Saint German be chasing after with their chequebooks, or Barcelona and Borussia Dortmund be in the market for after their most talented players have been sold off ?

Of course the best eleven England can put on a pitch isn’t all bad, but mostly their talent is boosted at club level by playing alongside foreign, more technically gifted and able players. On their own they’re not half as good.

And for those players who turn out for United, City, Chelsea, Liverpool and Spurs, a World Cup Qualifier, and – short of reaching the long-forgotten semi-final stage – the tournament itself, doesn’t come close to being the biggest match of their careers compared to the more realistic chance of Champions League glory.

It gets worse. The enormous wealth the Premier League provides to their clubs means that even for those players who are a long way from making it into the Champions League, the season-long battle to maintain that status pushes England games pretty far down their, and their coaches’, list of priorities. Arguably this also applies to clubs competing for promotion to the Premier League.

Is it lack of passion? No, it is the result of commercial calculation.  This is at the core of the sickness of what football has become, the hopeless confusion of mistaking the richest league in the world with being the best. It’s no accident that the Championship play-off final is described almost exclusively in terms of the riches awarded to the victor rather than the quality of the football played. 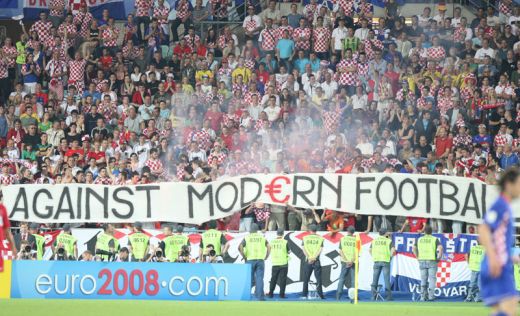 For a while, those of us who were disillusioned with that corrupting commercialisation adopted the mantra ‘Against Mod£rn Football.’ We first turned this into a T-shirt having spotted the words on a Croatian banner at Euro 2008. The sentiment was internationalist enough to make perfect sense. It’s a catchy, oppositional phrase that fits neatly on to chest sizes small-XXL – but ‘Against Mod£rn Football’ is increasingly problematic in two ways.

Firstly, there’s more than one version of modernity. Is the ‘against’ aimed at the growth of women’s football, or refugee leagues? Is it aimed against a game that has no intrinsic borders, a game that is all about overcoming divisions of race, gender, sexuality and nationality? Being against all that ends with oppositionalism masking conservatism, or worse.

Secondly the business of football has become inseparable from multinational corporate power. The macro-politics to reform the game traditionally adopted by both Labour and groups such as the Football Supporters Federation means any agency to enforce these policies seems almost impossible to imagine. Somehow I think an incoming Labour Government is going to have more immediate issues on its mind than nationalising the Premier League.

For these reasons it is absolutely vital to the future of the game to reimagine fan culture not just as hardpressed consumers, but as a social movement with the capacity to achieve change.

Currently this is very much a minority movement, but all such movements start out with big ambitions and modest advances. Their potential to grow and effect change is dependent on the ability to inspire via small victories which help convince wider forces that this is a direction of travel worth pursuing.

We can see this in the rise of militantly anti-racist ultra groups, at Clapton, Whitehawk and elsewhere. We can also see it in the growth of start-up football clubs – Hackney Wick FC, City of Liverpool FC and the women’s football club AFC Unity in Sheffield. The spread of community ownership up and down the divisions is another encouraging sign, as is the pro-refugees message heard from at least some stands – not on the scale of what was seen across the Bundesliga but present nevertheless.

At the core of any such movement will be gender issues – the recognition that if football is to become modern for all then the sport’s entrenched masculinity has to be challenged. Treating women’s football as different yet equal is a key step towards a truly inclusive game. On this basis the Equality FC initiative at Lewes FC, where the playing budgets are the same for women and men, is a model for all clubs to aspire to if the pressure ‘from below’ can be developed and sustained.

This isn’t fantasy football. It is about the remaking of the political, the recognition that it is in popular culture more than any other space that ideas are formed, the limitations on what is possible challenged and transformations take shape.

Brighton, for example, is now a Premier League club, playing in their own city. This is an ambition only made possible because of a 15-year campaign by their fans developing and sustaining a fan-led club culture.  And it is fitting therefore that it is in Brighton, at The World Transformed Festival which runs alongside the Labour Party Conference, that many of those involved in these practical initiatives will be gathered together by Philosophy Football to launch a discussion on what a campaign for ‘Football from Below’ might look like.

Any such discussion, if it is to have a meaningful purpose, demands allies. Labour and the trade unions via such a dialogue will be forced to address the narrowness of their own agendas and the scarcity of their own alliances. Football is a signifier of so many other spaces in popular culture where Labour and the trade unions need to be present, be part of, connecting ideas to lived experience towards change.

New Labour adopted football in the same way it adopted Britpop as a cultural accessory, providing photo opportunities and celebrity endorsements. It was a flimsy appropriation, coming out of a flimsy politics.  Corbynism promises something different, the framing of a popular, cultural politics will be vital to any fulfilment of that proud boast.  Football is just one of what should become countless journeys of putting the ideas of Corbynism into practical extra-parliamentary achievement. All of our cultural activities, all of the topics covered by Culture Matters – poetry, film, theatre, visual art, religion, eating and drinking, fashion and clothing, the media – should be the subject of campaigns to resist commercialisation and ideological manipulation, democratise access, and reclaim our common cultural heritage. We need culture for the many, not the few.

‘Football from Below’ wears the colours of FC St Pauli as our inspiration. But it is time to make that change in our own image too.  From the bottom-up, not in opposition to those who choose to follow the Premier League moneybagged bandwagon, that would be not only futile but also self-destructive. Instead as a minority we will be pioneering the practical possibility of building a game that doesn’t have to be run in the way it is. Rethinking football as a sport for all not a business to be run.

Mark Perryman is co-founder of the self-styled ‘sporting outfitters of intellectual distinction’ aka Philosophy Football. His latest book is Corbynism From Below.