David Betteridge remembers the poetry of Bill Sutherland. With drawings by Owen McGuigan

Readers who are familiar with the lower reaches of the River Clyde will recognise Dumbarton Rock in the drawing shown above.

We are looking down on the river from a hilly slope, from a position behind a pair of lovers, or so we presume the two figures to be, who are standing in front of us, pressed close. Grass and flowers are at their feet; trees cluster beyond, on both banks of the river. The lovers are so positioned that they might easily and joyfully jump off the hill, and fly like birds or paraglider pilots, and so get a closer look at the scene in front of them.

The upper half of the drawing is darker than the bottom half. It presents a crowded urban area, overhung by four clouds of smoke, each one hanging heavily over a different part of a town. That town is not Dumbarton exactly, but an artist’s re-imagining of it, as it was in the past, busy with shipbuilding and other industries. If you explore the drawing further, you will see ships on the river, and graves.

The drawing is the work of Owen McGuigan, well known as a photographer and a Clydeside archivist. His website is a magnificent treasure hoard of material relating to Clydebank and its environs, present and past. Never has the term “People’s History” been more apposite than when applied to this Gramscian labour of love that Owen has committed himself to.

Owen’s drawing is his interpretation of a poem by a Dumbarton writer, Bill Sutherland, dead regrettably, at a young age. Once a teacher, and a dedicated one, he was later employed as an oral historian at the Denny Maritime Museum in Dumbarton. He was a member of the Workers' City group of authors. Some of his early poems appeared in their Workers' City anthology of 1988. The poem illustrated here was published shortly afterwards, in a collection called A Clydeside Lad.

The poem starts by conjuring up the idyllic scene shown in the bottom half of  our drawing. We hear the voice of a “lad” addressing his “lass”:

Ah see tae lasses bright is May
and women kinely is the earth
an men whose jokin hides thir worth
an lads is honest is the day.

Suddenly the mood turns dark, as the speaker’s head takes over from his heart. Innocence gives way to Experience, as happens for instance in William Blake’s Songs of Innocence and of Experience, and as happens all the time, of course, in real life.

How much meaning has been packed into this poem, showing both political and personal awareness! How well the contrarieties of Innocence and Experience are managed! How beautifully a complex scene is described and dramatised! How skilfully a vernacular Scots is put into stanza form!

The same qualities are to be found in Bill’s other poems, which he crafted with great care during his short life. There are scores of them, many available only in handwritten or typewritten form. They are archived by the National Library of Scotland. You can access them by citing the reference Acc.14020.

Here is another of Bill’s poems from A Clydeside Lad:

Her mooth wis fuul o chuckie stanes -
“God bless this ship and all who sail...” –
an we wir laughin wild is wains
it muck on oor yerd-owner’s tail
fae where he’d slipt on ile an fell,
the day we launched the San Miguel.

The botil smashed. There came a hush
sae lang an wide it felt like noise,
sae wee Joe yellt, “It wants a push!”
Then, like it waited fur his voice,
the Giant edged oot fur the swell,
the day we launched the San Miguel.

A roar rose up sae strang an fierce,
loud fit tae crack the cranes above,
and many throats choked many tears
bit nane cid hide the powerfa love
thit burnt in aw, is in masel,
the day we launched the San Miguel. 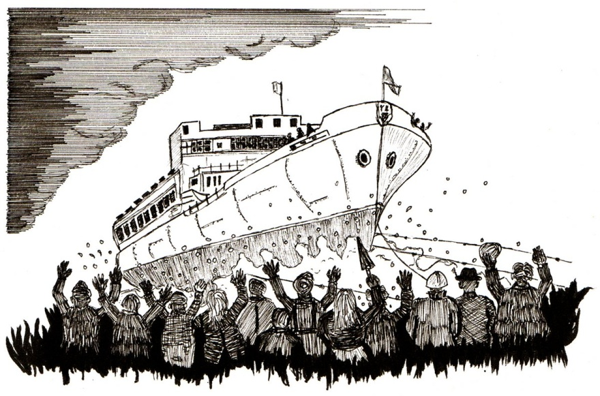 “We built a beauty oot a Hell...” There, in that single little paradox at the end of his short drama-in-verse, Bill gives us a succinct expression of his understanding of the syntax of working-class experience: first, the plural and collective subject “we”; second, the active verb “built”; third, the direct object of that act of building, “a beauty”; and fourth, the adverbial “oot a Hell”, defining the harsh circumstances out if which the “beauty” - a great ship, as ambitious a project as any cathedral - was conjured. The poem, as indeed the whole of A Clydeside Lad, is packed with similarly well-wrought phrases. They are its building blocks, with not a wasted or a clumsy line. Their articulate energy jumps out at us.

As in all his vernacular poems, Bill transcribed his Scots in such a way that we get the very sound of it, just the way he spoke it and heard it. His poems are from and for the spoken word. (Some might argue that all poems worthy of the name should answer this same description.) Eye-reading on its own is not recommended. Get the taste and sound of Bill’s lines on tongue and ear!

A Clydeside Lad begins with an in-depth Introduction, the work of the then Literary Editor of the Glasgow Herald, Chris Small, who tutored the Dumbarton Writers Group that Bill Sutherland attended. A key passage made in this Introduction contains the following insight:

Bill Sutherland’s collection of poems belongs firmly to a place, a speech, a community and a way of thinking and living...  He knows the reality behind the “economic terms”, and his knowledge enters his poetry with indignation and compassion...

Bill’s “way of thinking and living” was resolutely democratic, socialist, and in step with the complex realities of everyday life. He saw things in the round, and with a binocular or 3-D vision, so to speak, of a moral kind, seeing both the good and bad, the light and dark. There is a second key passage from Chris Small’s Introduction that helps us read Bill’s collection of poems as it was intended, that is to say as a whole, with a narrative shape to it:

The scope [of A Clydeside Lad] is wider than a single view.  It extends, with imaginative empathy, into other minds, and it moves backward and forward over more than one generation...

To test this “wider than a single view” point, I made a list of the characters who make an appearance in the course of the book, people with whom the poet empathises, though not necessarily agrees.  They include: his Mother and Father; a big priest; Ann, “aye sae thin, a deid wain o only three”; Miss McLeish, a teacher given to fierce punishing; Kate McGraw, a free-spirited classmate; a posh woman officiating at the launching of a ship, whose voice we have already heard; St Peter, God, and a succession of malodorous politicians, all in the same poem; Pat, a passionate singer, dying of cancer; Mike, a boozer, a boaster, and a bampot; a wife-to-be, who “made me wan wae aw thit aches tae grow”; and a Socialist orator from Glasgow, who made a winter’s night warm, and inspired the young poet:

This cast of characters helps drive forward the plot of A Clydeside Lad, which is the drama of the poet’s growing-up.

Regrettably, Bill and his poems have slipped over the years into a limbo of neglect, remembered by friends and established readers certainly, but making few new contacts along the way. The reason is simple: his works are out of print, and hard to come by, even on the second-hand market. Bill himself had some thoughts on the subject of availability and accessibility.  In an interview that he gave to a local journalist, Rory Murphy, he said:

I’ve had a lot of help from my local councillor, Geoffrey Calvert.  He’s been pushing hard to have my books sold through the local libraries...Wouldn’t it be a good idea [to have] a corner which had all our local authors’ books on view, and for sale? I mean, all of them, not just a chosen few...

It would be like saying to ourselves,“Yes, we are creative people; yes, we should take pride in ourselves; yes, and if these writers can do it, maybe I could do it too.” It would be a great big Yes to ourselves as a community... 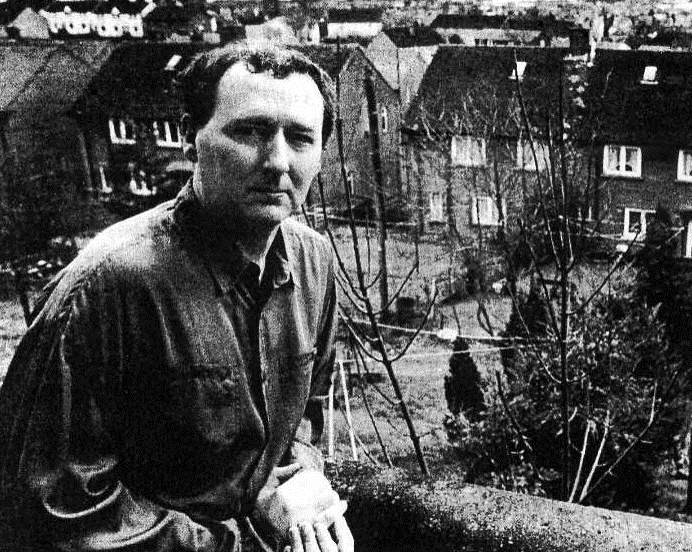 Bill Sutherland, in his home-town of Dumbarton

Right now on Culture Matters, as a constructive small step, we can give Bill and some of his poems a certain afterlife online; and we can hope that other websites do the same. Maybe, seeing Bill’s work, some publisher will come along and re-issue A Clydeside Lad, and other writings, too. Maybe librarians and booksellers will make shelf-space for them. Maybe some singer-songwriter will add a memorable tune to some of Bill’s already memorable words, and thus give them an added chance of survival, on the folk-club scene. Maybe educators will include a selection of his poems in a school anthology, thereby slipping them into the carrying stream of a common curriculum.

Such initiatives - and face-to-face workshops, as well, of the Workers City kind, which helped Bill get from writing privately to publishing and performing - contribute to the fleshing out of an essential eco-system of letters. That eco-system, in turn, contributes to the growing of our essential Left counter-culture, without which our political advances falter.

In the 2019 General Election, the Labour Party went down to a bad defeat, even in its traditional heartlands. The defeat can be explained, I believe, in large measure in cultural terms. “Where there is no vision, the people perish.” Bill Sutherland knew the truth of this proverb, and his poems embody it, expressing in heartfelt words the heart of the heartless world.

A poem may serve as a summary rounding-off, arguing against neglect and oblivion, and in favour of keeping our culture going, fighting across a wide front:

Seeds For the Planting Shall Not Be Ground Up:
so Käthe Kollwitz called a picture
that she made.

It shows three children hugged within the circle
of their mother’s arms; the mother fiercely
and with vigilance looks round,
their guard.

Such love the wise extend to more than family
and seeds.

Thoughts for our thinking shall not be let
to slide;

values for our saving shall not be lightly held,
nor scorned;

books for our reading shall not be pulped,
nor put in skips, nor left
in dead files or bottom drawers,
nor thrown in furnaces and burned. 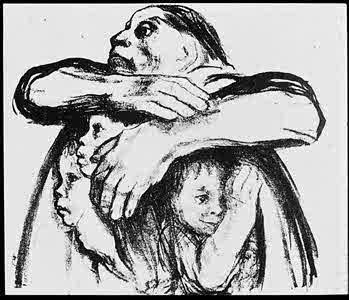 Seeds For the Planting Shall Not Be Ground Up, by Käthe Kollwitz, 1942