Thomas Alfred “Tommy” Jackson (1879 – 1955) has been described as “the most brilliant proletarian intellectual to come out of the British Communist Party”. Born into a working-class family in London, he followed his father into the printing trade, but after completing his apprenticeship as a compositor he became increasingly involved with the socialist movement. In 1900 he joined the Social Democratic Federation, in 1904 he was one of the founder members of the Socialist Party of Great Britain (serving briefly as its General Secretary in 1906), but in 1909 he joined the Independent Labour Party (ILP) for whom he became a paid speaker until 1911, when he left the ILP to become a paid lecturer for the National Secular Society and then a freelance lecturer.

In 1917 he joined the Socialist Labour Party and also became a lecturer for the North East Labour College Committee. In 1920 he was a founding member of the Communist Party of Great Britain (CPGB), a delegate to the Comintern, a member of the Central Committee from 1924 to 1929 and editor of The Communist and The Sunday Worker. Jackson opposed the ‘Bolshevisation’ of the CPGB in 1924 and was a leading critic of the ‘class-against-class’ strategy and this led to his removal from the Party’s leadership. However, it is important to note that despite his disagreements with the Party’s leadership, Jackson never became a renegade and continued to work as a journalist for the Daily Worker and after the Second World War as a lecturer for the Party’s Education Department. In addition, to his journalism, Jackson published a number of important works of Marxist theory, criticism and history including: Dialectics: The Logic of Marxism and its critics (1936), Charles Dickens: The Progress of a Radical (1938), Ireland Her Own (1946), as well as a collection of his literary journalism for the Daily Worker entitled, Old Friends to Keep: Studies of English Novels and Novelists (1950) and his autobiography, Solo Trumpet (1953). 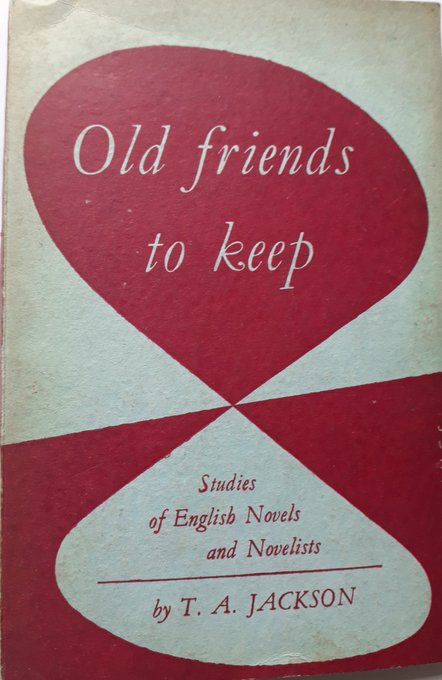 In his introductory essay to Old Friends to Keep, Jackson writes of his “unshakeable conviction of the indispensability of a cultivated imagination as a condition precedent for revolutionary class struggle, and of the high worth of classic fiction as a means of stimulating and developing that imagination.” Jackson returns to this themes in his closing pages where he writes, “I regard the systematic cultivation of the imagination – especially among the militant vanguard of working-class struggle – as the most fundamentally revolutionary work that there is to be done.” In effect, Jackson insists on the importance of “a cultivated imagination”, identifies “classic fiction” as one of the best means of producing such an imagination and, finally, contends that such an imagination is an ‘indispensable’ precondition for “revolutionary class-struggle”. These are large claims indeed; but as they are made by a Marxist after fifty years of practical experience of the class struggle, perhaps we would do well to take them seriously.

Certain aspects of Jackson’s thinking, for example his defence of literature both as an enlargement and enrichment of life and as a repository of trans-historical value, can be located within an emerging Marxist tradition of cultural theory. A more distinctive element in Jackson’s thought is his insistence on the immediate, practical value of literature as literature (i.e. not as propaganda) to the working-class movement. The crucial questions, identified by Jackson, are these; how precisely does the engagement with literature assist the “systematic cultivation of the imagination” and why is this of value to “the militant vanguard’?

Jackson provides the following answer to the first question:

The more profoundly the imagination penetrates into the essence of social reality, the more surely the artist reveals that most universal of truths – that motion is the essential characteristic of reality. “Things have just this value – they are transitory.” Fixity, immobility, finality, static indifference – these are attributes of the veil of illusion it is the function of great art to strip away. That which abides eternally is and can be nothing but motion; and the function of art is to so quicken feeling that it sets the intelligence searching and urges the will to action (OFTK 19-20)

Literature, therefore, promotes heuristic activity on the part of both the author and the reader. In this formulation, the author does not convey truth to a passive reader, rather the result of the author’s active enquiry into social reality provokes a corresponding enquiry on the part of the reader. In short, literature teaches a particular mode of thinking and promotes a particular form of consciousness, both of which are recognisably ‘dialectical’. In short, it is not that a given work of literature instructs its reader what to think, rather it teaches its reader how to think. It is also worth noting the sequence identified by Jackson, first feeling, then thought and, finally, conscious action.

Jackson’s focus on the active, empowering potential of literature is a valuable and necessary corrective to those forms of cultural theory (frequently originating in post-structuralism) which emphasise the difficulty (even the impossibility) of thinking outside existing social forms. These have given rise to pernicious forms of cultural criticism in which no cultural artefact is ever good enough because it is ‘always-already’ compromised by, or implicated in, various extant forms of oppression. Adorno was alert to this problem in the 1940s warning, in Minima Moralia, that the danger of denying the affirmative potential of art helps to “bring about directly the barbarism that culture is reproached with furthering indirectly”.

He also argues that the function of literature is to “quicken feeling”, prompt intellectual enquiry and motivate action. As Marx’s final thesis on Feuerbach reminds us, this is the vital stage. However, as Tommy Jackson knew from his own experience, the passage between the three stages is neither inevitable or necessary. In some cases excessive sensation precludes thought, while in others the combination of sensation and thought negates the need for action. In both cases, it might be argued that action is prevented or negated by an excess of identification – with “sensuous form” on the one hand and with “rational content” on the other.

This, perhaps, provides us with a clue as to the nature of the “cultivated imagination” which is the lynch-pin of Jackson’s theoretical model. The “cultivated imagination” signifies not only the optimum combination of feeling and thought, but more importantly, suggests the need to move beyond an ‘aesthetics of identification’. In this respect, Jackson resembles the great Marxist playwright Brecht, who also sought to theorise and develop an artistic practice capable of jolting its audience into real historical consciousness.

Mike Sanders is Senior Lecturer in Nineteenth-Century Writing at the University of Manchester.