Dennis Broe on the Global Television Beat discusses some TV series dealing with middle-class life under pressure in Ozark, and depictions of Freud and Freudians in Vienna Blood and Freud

The third season of the Netflix popular and critical hit Ozark has the show going ever darker. It’s beginning to make Breaking Bad seem like a sitcom.

In the first season, there seemed to be a way out for the accountant Marty Byrde, participating in money-laundering for a Mexican drug cartel and having to make up for funds the partner in his firm embezzled from the cartel. The Byrde family is forced to flee their comfortable Chicago home to the Ozarks with their two teenage kids.

Here, Laura Linney, Marty’s wife Wendy who had worked in politics, displays an unerring sense of comedy in scenes in which she and Jason Bateman’s Marty proclaim their upstanding wish to better the Missouri community they are holed-up in, while all the time simply setting up bogus businesses to “clean” drug money. Bateman’s stoic, nonplussed deadpan acting is a marvel in itself. He’s a Bob Newhart for the neoliberal age, keeping his cool in a world that grows ever more insane around him.

The cut-throat world  that Marty and Wendy inhabit was exhibited off-screen as well when the show’s production company, Media Rights Capital, was accused of forcing a publication which it owns, The Hollywood Reporter, to report favourably on the company, with the editor resigning possibly due to this pressure. 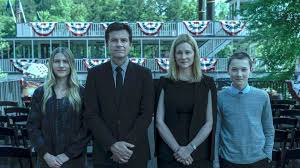 Season Two had Wendy forsaking the comedy and moving deeper into the business, opposing an equally unethical FBI agent and in the end participating in a murder. Season Three, just released on Netflix, has the two in the middle of a cartel war and warring themselves. Marty still believes that their troubles are situational and momentary, and if he launders the right amount of money they will get out from under the cartel’s thumb. Wendy, though, strikes out on her own, using her political muscle, and becomes more ruthless in her quest to make herself essential to the cartel chief, who she courts over the phone. This season ends in the couple’s – and particularly Wendy’s – participation in the murder of an intimate. Marty in the end concedes Wendy is right, that the only way out is to become further entangled.

Is this just a crafty “twisty” tale of chicanery? If so, why is the show so wildly popular with both critics, nominated for several Emmys, and audiences, quickly renewed each season by the streaming service based on its (carefully guarded) ratings?

The onslaught on the middle class by corporate capital

The explanation may lie in invoking Raymond Williams’ notion of a “structure of feeling.” By this term Williams meant sometimes barely expressed or even subconscious feelings in art and cultural practices that registered a deep insight into the emotions that lie just under the surface of life. Ozark expresses the emotional tension of the American, and indeed the global, middle class, under increasing pressure to maintain its position in the face of an onslaught by corporate capital which is affecting them as well as the working class below.

There is a racist projection of the ruthless Mexican drug overlord as controlling their lives. However, if we substitute a corporate overlord for the drug kingpin the show is a description of a middle class – a class that in order to hold onto their lifestyle must be constantly at the beck and call of a domineering boss or corporate culture, that demands ever more time away from the family and demands the family become ever more corporate-friendly itself.

Wendy and Marty must be constantly on their toes – the corporate phrase is “adaptive” – to manoeuvre around each new demand of their boss, as more and more middle-class jobs  are being eliminated by automation, and as that class must learn more and work harder to maintain its position. Otherwise, they will be killed – or in more middle-class terms will fall into the working-class poverty of those who surround them in the Ozarks, which is a kind of death for this class.

Even their kids are affected. The pressure to launder money to keep up their middle-class lifestyle robs their teenage daughter Charlotte of the last years of her adolescence. Meanwhile, the just-becoming-a teen Jonah is introduced to the violence that surrounds the family, and learns Bitcoin investing to stockpile reserves of money to save the family. He also pilots a drone which he uses for spying, participating in the surveillance economy which he will need to be a part of if he is to maintain his position.

Marty and Wendy must make smarter, and more ruthless, decisions each season to survive and in Season Three these pressures force them to compete against each other. There is no port in a storm for an American middle class that is starting to feel the relentless stress of its constant battle to hold its ground and its somewhat extravagant lifestyle. Of course it’s the same stress the global working class is under each day simply in order to survive – Ozark tells us that the two positions are starting to converge into one giant disenfranchised class.

Two recent series, both publicly supported, have as their subject the birth of psychoanalysis within the conservative confines of the Hapsburg dynasty in turn-of-the-century Vienna. The BBC’s Vienna Blood (available to stream on PBS, the US public television website), based on the detective novels of Frank Tallis, shows an acolyte of Freud, Dr. Max Liebermann, joining forces with a bulldog working-class police inspector. Together this unlikely pair delve into the unconscious, and the prejudices of an anti-Semitic empire somewhat being attacked from within by Freud’s discoveries of the sexual and violent side of both human nature and the empire itself. 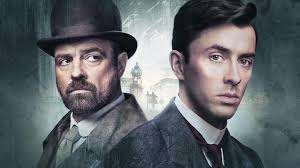 Vienna Blood does settle comfortably though into the rational detective mode with clear-cut villains and evildoers while striking a blow against the militarism of a society structured around rigid social distinctions.

More troubling by far is a programme from Austrian National TV (ORF) called Freud, now streaming on Netflix, with Netflix also a partner in the production. This series is set in the 1880s,  and is on the surface a kind of mixture of Young Sherlock Holmes, that is a coming-of-age Freud obsessed with hypnosis, and The Private Life of Sherlock Holmes, a coke-sniffing Freud who is manic and driven and on the verge of discovering the unconscious. The series is also a kind of origin story, a how Freud became Freud, and in that sense it does not escape the superhero template in revealing how our hero developed and first used his powers.

However, much about this series does not fall into this comfortable framework. Volkslieder, or people’s song moments abound – Brechtian ditties in a tavern that comment on the action while being outside it. The series also delights in an outpouring of all kinds of human waste, as a hysteric spews spittle and blood overflows in a series of brutal murders, in what Freud would later call abnegation, a spewing out or rejection in this case of bodily fluids.

This emphasis on bodily excretions also suggests the Austrian Actionist movement of the 1960s, that was about exhibiting the excesses of the human body as a way of disrupting social order. Hypnosis is here made strange, and practiced by Freud as a conjuring art. It is used not to illuminate but to manipulate the unconscious. 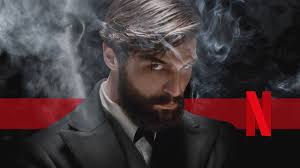 Freud battles the brutality of a medical establishment that does not link mind and body, and the series shows him eventually surpassing the cruelty of his mentors. In a parallel plot, the police inspector Alfred Kiss, his sometimes unwitting ally, also contests the savagery of the Austrian military in its murderous rampage against its foes and its cover-up of all wrongdoing.

The series has its problems though. The Hungarians, the subjugated villains, are treated as an unearthly ‘Other,’ savage anarchists out only for revenge. This Freud, for all his disputing of the might of the empire in his own field, like all good liberals comes to the rescue of the Emperor when the chips are down, and helps re-establish Imperial order.

Both series skirt the potentially most shocking and damning aspect of the young Freud’s discoveries – the dreadful patriarchal oppression of incest and abuse that he unearthed from his female patients, lurking at the heart of the Viennese upper middle-class bourgeois order. But Freud himself also suppressed this discovery, choosing instead to explore it as fantasy. So the practice continues to be hidden – not only in TV series depictions of Freud, but in reality as well.