"All truth passes through three stages. First, it is ridiculed. Second, it is violently opposed. Third, it is accepted as being self-evident." - Arthur Schopenhauer

Sometimes I hear sounds in my roof that tell me that the birds are trying to get in and make a nest in the attic. I crawl to the point where the joists meet the rafters and I can see the light coming in from the outside. It is at this point, at the extremity of the house and when I am on my belly because of the pitch of the roof, that I am reminded of the Flammarion engraving. 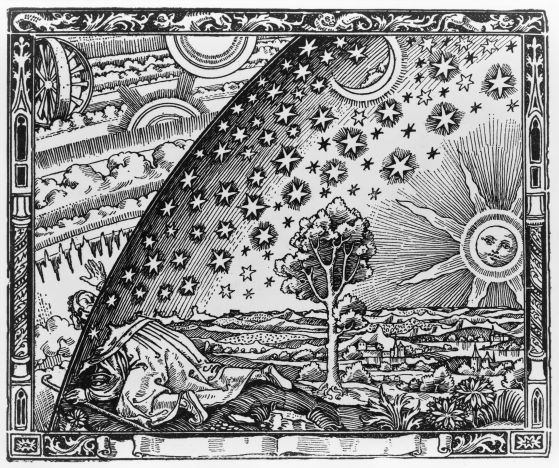 A traveller puts his head under the edge of the firmament in the original (1888) printing of the Flammarion wood engraving.
Flammarion engraving
The Flammarion engraving is a nineteenth century depiction of the sky as a dome where a traveller goes to the edge of the world puts his head through to see the greater universe outside. The safe, comforting world of a static blue vault of fixed stars gives way to a modern dynamic view that the earth is moving in space. It is interesting that it is a traveller that is depicted, the type of person who goes beyond local boundaries of mental and physical limitations to achieve understanding.

The concept of a dome was also used in the film The Truman Show (1998), a 'reality' show where Truman Burbank is followed and watched 24 hours a day without realising it. Truman's slowly developing consciousness that all is not right in his perfect world begins when strange things start happening to him. There is a glitch in the radio and he hears his own route being discussed. He becomes suspicious and tries to catch people off guard. He runs into an office and discovers the elevator is not real but a set. He gradually becomes aware that he is surrounded by actors who even advertise the goods that he consumes in various forms of product placement. Eventually he resolves to leave and has to use deceptive means to escape the prying eyes of the cameras that watch him night and day. He overcomes his fear of water and sails away from his artificially constructed hometown of Seahaven Island. 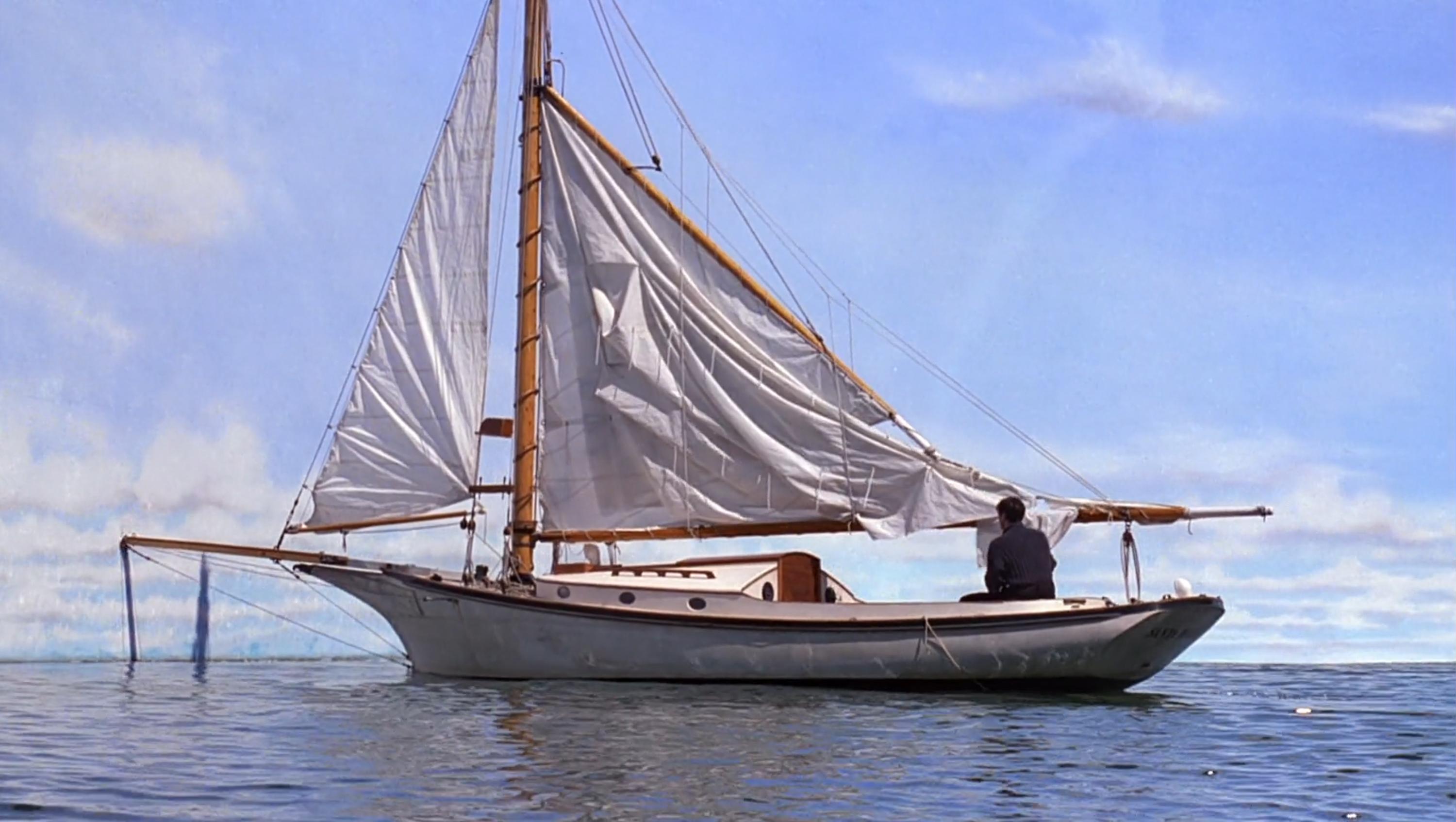 Truman crashes into the dome
Despite an artificial storm created by Christof (his godlike father, the show's creator and executive producer) Truman sails to the edge of the dome where he crashes into the sky and cloud painting of the wall of the dome itself. He has reached the boundary of his world and now has to decide whether or not to leave his comfortable life behind and face reality outside the dome. Christof tries to dissuade him but Truman takes his destiny into his own hands and disappears through a door in the dome.

Inside the Media Dome
Truman's dome is symbolic of the media dome we are all encapsulated in today by the prevalence of a monopolising mass media. Like The Truman Show, everything inside the media dome appears to be perfect. The right causes are matched with the right emotions and arguments, and everybody agrees. It has the right 'bellyfeel', a neologism which George Orwell used in his novel Nineteen Eighty-Four (1949) implying blind, enthusiastic acceptance. Outside of the comfort of the dome there lies only a fantastical, fictional world full of propaganda, hoaxes and conspiracy theories.

The idea that the media dome may be some form of sinister manipulation has been depicted in many films such as They Live (1988). A homeless drifter (another traveler), Nada, finds a pair of sunglasses which reveal the 'true' meanings of the advertisements which surround us. He "discovers that the sunglasses make the world appear monochrome, but also reveal subliminal messages in the media to consume, reproduce, and conform." The manipulation is attributed to aliens who are "enslaving the population and keeping them in a dream-like state." 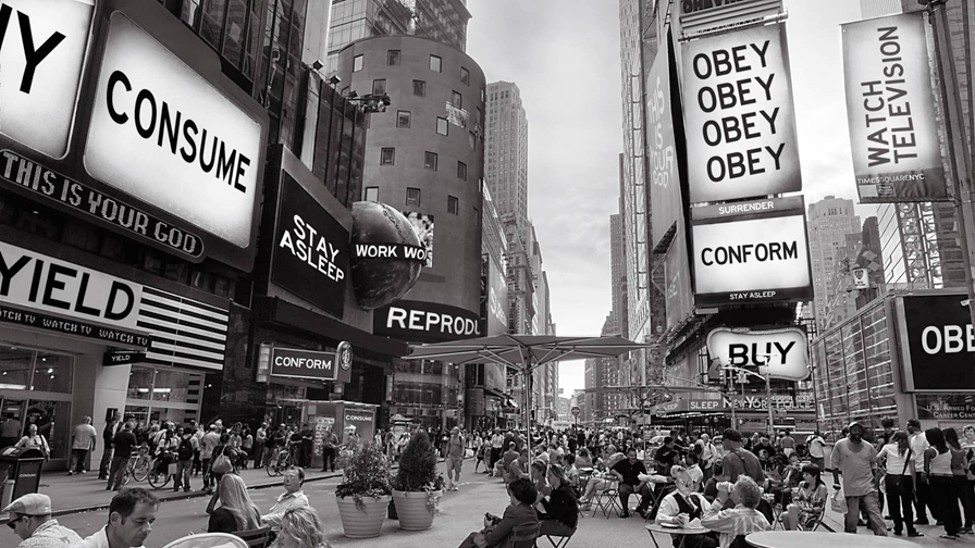 In the real world subliminal messages in advertising have ranged from words and images briefly flashing in between frames of film (usually at one tenth of a second) to subtle uses of visual design. Thus, subliminal messages "are visual or auditory stimuli that the conscious mind cannot perceive, often inserted into other media such as TV commercials or songs. This kind of messaging can be used to strengthen or heighten the persuasiveness of advertisements, or to convey an altogether different message entirely."

Aliens also feature in the film Men in Black (1997). The MIB is a secret organization that monitors and polices extraterrestrial lifeforms who live on Earth and hide their existence from ordinary humans. Lowell Cunningham, the writer of the original The Men in Black comic book got the idea after a friend of his introduced him to the concept of government "Men in black" riding the streets in a black van.

Cunningham's narrative satirises State secretive organisations whose activities are kept hidden from much of the global population. Thus, the Agents of the MIB keep the people safe from 'alien' concepts and activities.

In the Matrix series of films the idea of a secret world of mass media manipulation is taken a step further and depicted as a simulated reality that is also protected by a team of Agents and police. A computer programmer Thomas Anderson, 'Neo', is taken to meet Morpheus, a 'terrorist', who offers him a choice between two pills: red to reveal the truth about the Matrix, and blue to forget everything and return to his former life. Neo takes the red pill and learns that humanity is enslaved by intelligent machines. In the Matrix films people have the opportunity to see beyond their simulated reality (like Nada) but choose to stick with their comfortable lives instead (unlike Truman). In fact, Morpheus warns Neo, "many of them are so inured, so hopelessly dependent on the system, that they will fight to protect it."

Allegory of the Cave
Of course, the concept of people preferring a way of life that is ultimately against their own best interests is not new. Plato discussed such an idea over two thousand years ago in his Allegory of the Cave in his work The Republic. In the cave, prisoners are chained so that their legs and necks are fixed, forcing them to gaze at the wall in front of them. Behind the prisoners is a fire, and between the fire and the prisoners is a raised walkway with a low wall, behind which people walk carrying objects or puppets of men and other living things. The prisoners cannot see any of what is happening behind them, they are only able to see the shadows cast upon the cave wall in front of them. These shadows are reality for the prisoners because they have never seen anything else. Plato then discusses the freedom of one prisoner. He writes: "the freed prisoner would turn away and run back to what he is accustomed to (that is, the shadows of the carried objects), he would escape by turning away to the things which he was able to look at, and these he would believe to be clearer than what was being shown to him." 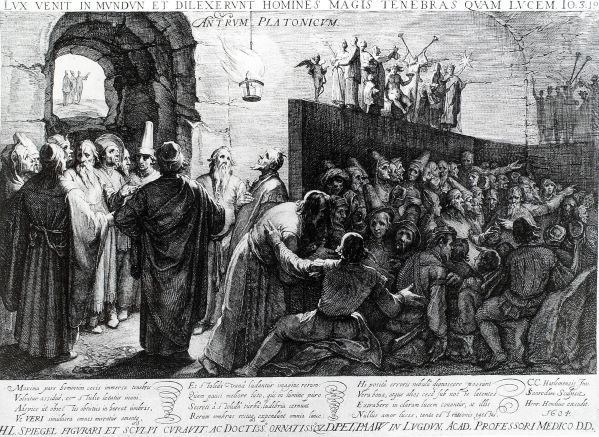 Plato's allegory of the cave by Jan Saenredam, according to Cornelis van Haarlem, 1604, Albertina, Vienna
The implications of the new reality outside the cave are so enormous and so threatening to his fixed way of life that the prisoner chooses his accustomed way of life over dramatic changes and a new consciousness. The active manipulation of his perceptions does not enter into his consciousness, afterall, somebody has to chain him, keep the fire lit and carry the "vessels, and statues and figures of animals made of wood and stone and various materials, which appear over the wall." All he thinks about is returning to the way of life he was used to, watching the show but never questioning who was producing it.

The Media Loop
The idea of media manipulation and protection from 'alien ideas' (read ideologies) is extended further in Orwell's Nineteen Eighty-Four (1949) to include supporting the war agendas of the state. Support for the 'right' side in each war is guaranteed by provoking hate and fear in equal quantities for each new 'enemy of the state'. Orwell writes:

"And all the while, lest one should be in any doubt as to the reality which Goldstein's specious claptrap covered, behind his head on the telescreen there marched the endless columns of the Eurasian army--row after row of solid-looking men with expressionless Asiatic faces, who swam up to the surface of the screen and vanished, to be replaced by others exactly similar. The dull rhythmic tramp of the soldiers' boots formed the background to Goldstein's bleating voice. Before the Hate had proceeded for thirty seconds, uncontrollable exclamations of rage were breaking out from half the people in the room. The self-satisfied sheep-like face on the screen, and the terrifying power of the Eurasian army behind it, were too much to be borne: besides, the sight or even the thought of Goldstein produced fear and anger automatically. He was an object of hatred more constant than either Eurasia or Eastasia, since when Oceania was at war with one of these Powers it was generally at peace with the other."

In reality, the enemy of the state is also decided according to the war agenda of the state even if the war does not benefit the people themselves. Because of the whipping up of emotion and hatred, the people do not notice that they actually have no reason to be at war. Each new enemy, even ones they had good diplomatic relations with, becomes an enemy if they stand in the way of the state or threaten the power of the state by their actions to gain some autonomy from the state. The media becomes an ideological loop where it is decided who is good or bad according to the views of the elites of the state and not the people, while alternative ideas or ideologies are kept out.

Thus the media dome controls every factor of the peoples lives, from what to think, what to buy, and who to go to war with. 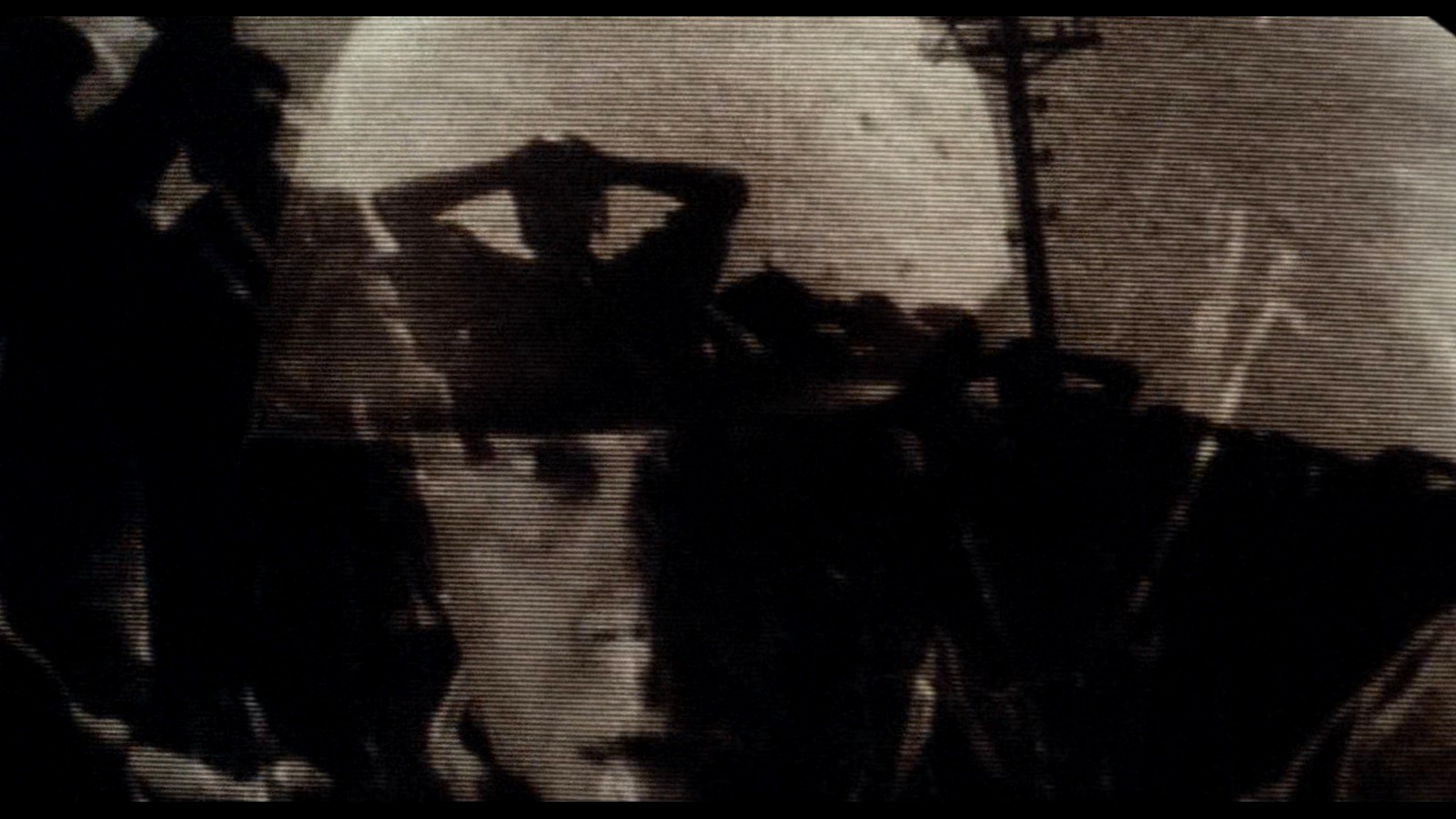 Of course, in the real world there are leaks (like Truman's radio) that provoke questioning of the whole structure of the dome, that maybe something is artificially keeping the paradise going. Some respond to glitches in the system with outright refusal to believe that everything they know may not be true and they get very angry. Others are suspicious and take a skeptical attitude, basing their thinking on contradictions they have already noticed themselves. Still others take a critical attitude and actively seek different narratives to explain the reality that surrounds them.

While all this is happening alternative forms for questioning and understanding are being shut down and censored. Aspects of the media that allowed for analysis and discussion are disappearing because they too, like the mass media in general, are owned by megacorporations.

However, like in the Flammarion engraving, the comforting world of a static blue vault of fixed stars will always be contradicted by the massive energies outside the dome, and the inquisitive traveller will return with stories that are at first ridiculed, then opposed, before eventually being perceived as obvious.
Tweet
Read 228 times Last modified on Tuesday, 19 April 2022 09:13

Caoimhghin Ó Croidheáin is an Irish artist, lecturer and writer.