Dennis Broe reviews some new police procedurals. Photo above: Jenkins and his Task Force going about their dirty business in We Own This City

Post-9/11, with the popularity of C.S.I., as George W. Bush’s “War on Terror” overlapped with George Bush’s “War on Drugs,” the airwaves were filled with every conceivable kind of law enforcement team, unproblematic and uncorrupted, battling all kinds of crime. These squads ranged from the Law and Order franchise which began over 20 years ago and has still not yet run its course, to the Navy (N.C.I.S.), to F.B.I. profilers who anticipate future crimes (Criminal Minds) and cops who sort through the past to locate lawbreakers (Cold Case). 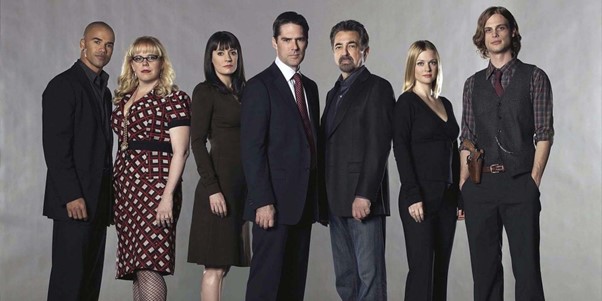 These series continue to be popular and to be the dominate image of the police in popular media. However, in the wake of the Black Lives Matter protests, which though they took place in 2020 are just now starting to register on serial television, two shows have now appeared which offer a startlingly different view of the police and policing. From Disney+ there is Oussekine, about the death of a young Algerian student in 1986 at the hands of the French police and from HBO comes We Own This City, by the creators of The Wire about a division of the Baltimore police described as “1930s gangsters” who terrorized the Black inhabitants of the city over the last decade. Both are limited series of 4 and 6 episodes respectively and both are fictionalized representations of actual events.

Beaten to death by police

Oussekine follows the Algerian family of that name as they attempt to find justice for their youngest son Malik, beaten to death by three cops in the midst of a student protest in the Latin Quarter that he was not part of. The police deny any involvement in the killing with the French Minister of the Interior (Olivier Gourmet), staunchly moral in his quest for a cover-up, searching not for what happened to this budding student whose life is brutally snatched from him, but rather looking instead for a way to shift guilt, and finally alighting on the boy’s fragile condition as the excuse.

We watch the flowering of Malik’s sister Sarah (Mouna Soualem) as she indicts the police at the trial of two of the cops and we are treated to the spectacle of the French socialist (?) President Mitterrand arriving at the family’s house for a photo opportunity, arranged by posting him next to the window with the best light while the family becomes props in the background. Finally, we watch French justice, in one of the first ever cases with cops being held responsible for police violence, as the jury first convicts and then exonerates and whitewashes the guilty defendants. 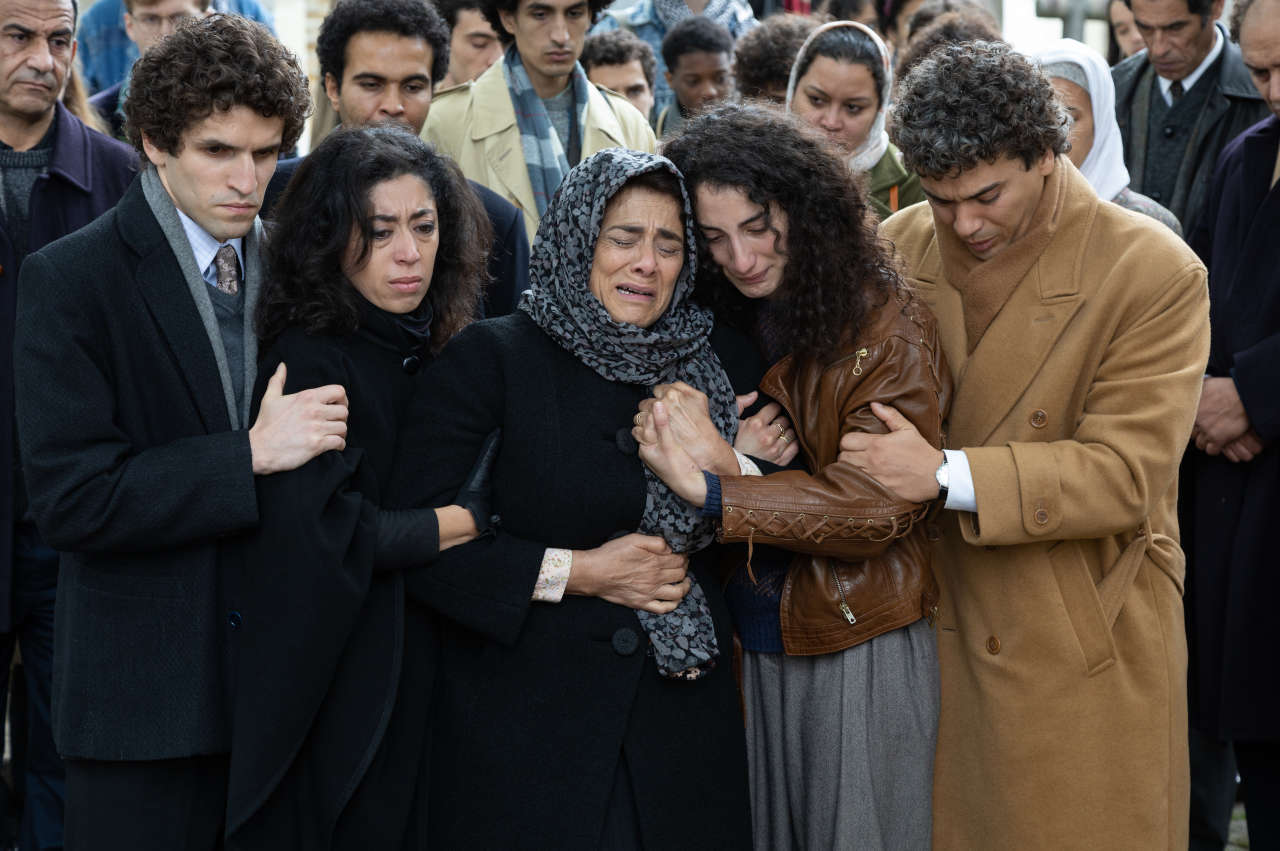 This is a strong series throughout, registering a racist history of prejudice against Algerians that the family witnesses upon their arrival in the country. In 1961 there was a mass killing led by the police of perhaps 300 Algerians, whose bodies were then tossed off the Pont Neuf bridge in the centre of Paris. The series unfortunately ends not with an outrageous bang at the verdict but with a timid whimper as we are shown the actual family today. It might better have countered the verdict with another spirited denouncement from Malik’s sister Sarah.

More brutal because more systematic is David Simon and George Pelecanos’ We Own This City, based on the book by Baltimore Sun reporter Justin Fenton, part of a Pulitzer Prize winning team. The series is solidly focused on the leader of Baltimore’s Gun Trace Task Force, Wayne Jenkins, charged not with confiscating individual guns but with finding the source of the weapons. Instead, Jenkins is shown using his squad to track down dealers in order to steal their money and confiscate their product. He then sells to his own fence, who skims 15 percent off the top and then resells the drugs back on the street.

Jenkins and his men break and enter cars and houses and then request search warrants. In one sequence they steal half of the $200,000 they find in a dealer’s safe and then, for the body cameras they are required to wear, they stage a phony reopening of the safe now shorn of half its contents with Jenkins directing “the film” before they shoot.

A frantic chase by Jenkins, with little or no evidence of drugs or guns, results in the death of an old man. Jenkins steals from a dwarfish sex worker, boasting that he stole twice what she asked for, and then eludes a 20-day suspension because of his activity in leading a confrontation with protestors over the death in custody of a young, well-liked Baltimorean Freddie Gray.

On top of that, Jenkins is shown “halting” the looting of a Rite-Aid in the subsequent rebellion, but then confiscating the drugs himself and taking them to his fence, who recognizes they are “mostly Oxy” and who will then redistribute them to needy addicts. If the now disbanded Gun Trace Task Force was actually doing its duty in tracking arms to their source it might have arrested the 16,693 arms makers in the U.S. who, a recent Department of Justice report acknowledged, manufactured 71 million firearms in 2020.

Officers like Jenkins, promoted to sergeant and later given the police Medal of Honour, remain on the force because of the “professional” code, introduced by the LAPD’s Chief Parker, claiming that police as professionals with their own standard of conduct can best discipline themselves. Instead, we watch the Police Commissioner throwing up his hands and claiming the streets are too unruly to take officers like Jenkins out of action.

Jenkins and his colleagues also cheated the city out of a large amount of money by exaggerating overtime. In the opening of the series, Jenkins, in a training session with other police, claims that if cops don’t play rough, “We lose the streets.” The answer to this false claim is in the later scene where Jenkins is “instructing” his squad on how to falsely fill out overtime sheets and ends by asserting, “We own this city.” Jenkins’ resolute lawbreakers are a resounding answer and alternative depiction of the previously mentioned fun-loving cameraderie of the post-9/11 TV “squads.”

The state-sanctioned war against poor Blacks by police

The series does not extrapolate larger points beyond the police, but as it unfolds there are larger points to be made. The first is along the lines of Michael Moore’s Bowling for Columbine which finds a link between U.S. domestic violence and U.S. weapons manufacturing and foreign policy. Before entering the Baltimore police, Jenkins was a Marine who, as Fenton relates in his book, was described by his sergeant as exhibiting “the utmost flawless character that I’ve ever ran into over my twenty years of serving this great country.” 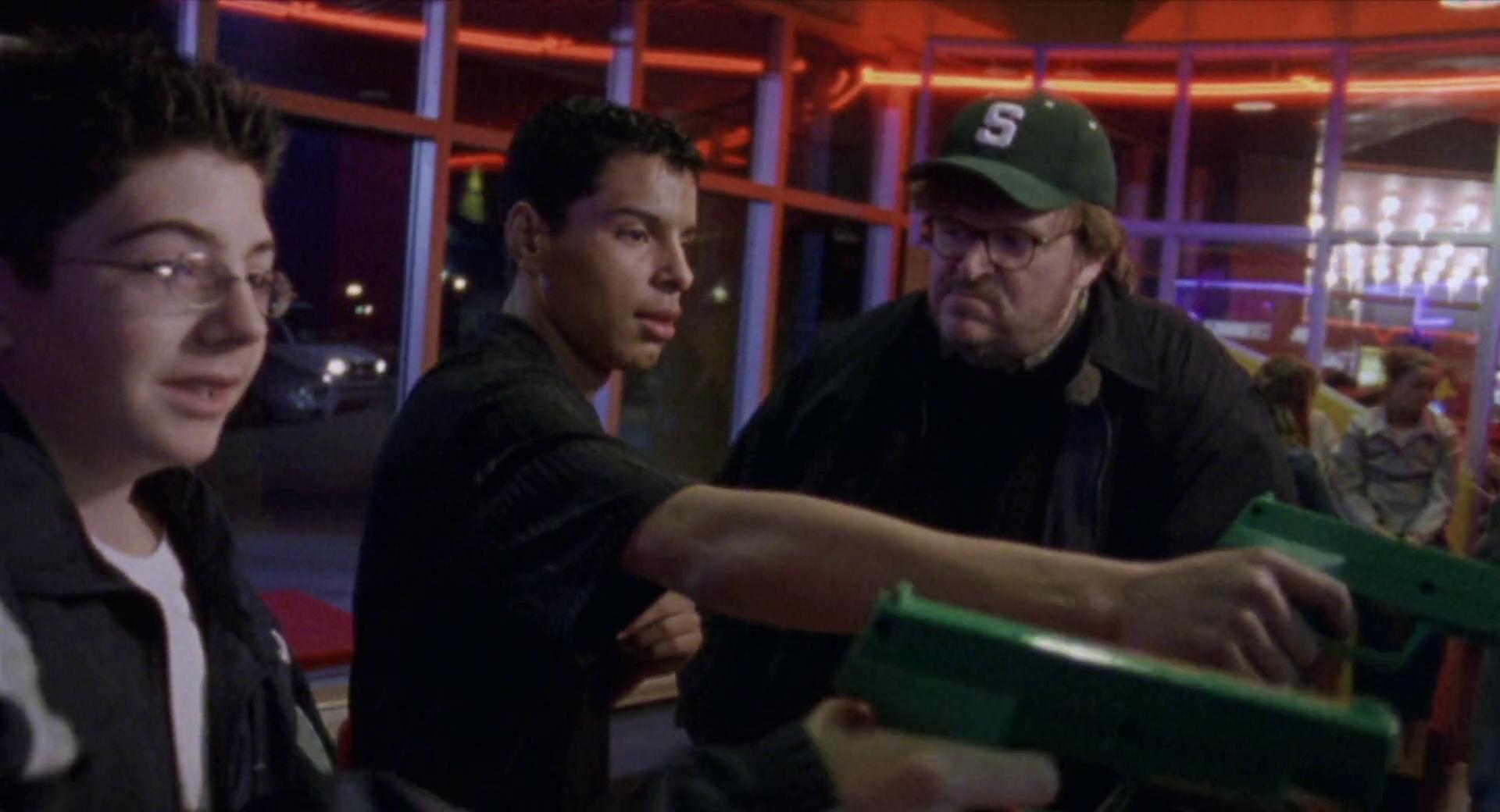 Michael Moore with young gun enthusiasts in Bowling for Columbine

This “great country” boasts a military budget greater than the next nine countries in the world, while claiming it is constantly being threatened, and which, over the protests of European and developing world leaders such as Italy’s Mario Monti and Indonesia’s “Jocko” Jokowi continues to preach endless war in Ukraine. It is not a mistake that this country produces characters like Jenkins for its “war at home.”

That war, on the streets of the U.S., is waged mainly against its Black and minority citizens. Critics pointed out initially that the police in We Own This City are colourblind, with many of the subordinates on Jenkin’s squad being Black officers. However, it is still Jenkins, the white Marine, in charge. The larger point though is that the squad’s devastating attacks are shown as entirely against the Black population of Baltimore, viewed by Jenkins and his cohorts as not victims of impoverished neighborhoods infected with guns and weapons, but always, already as criminals.

Jenkins’ attitude is the unquestioned adoption of what in the 1930s and 1940s is now seen as a kind of eugenics where minority neighborhoods are viewed as genetically criminally inclined not because they are lawbreakers but because they are poor and stand outside the middle-class propriety of a Jenkins who lived in a comfortable Baltimore suburb.

There may be Black and White behind the Blue Line but that line is used to regulate and destroy all attempts at community, as the series illustrates in almost every scene. This community in its collectivity is perceived as threatening those who seem to look askance but ultimately look away, both in the U.S. and in the world, from the state-sanctioned violence needed to maintain their status.

Dennis Broe is the author of The Precinct with the Golden Arm, the upcoming third volume in the Harry Palmer mystery trilogy whose subject is the LAPD, the pharmaceutical industry and Mexican culture in LA.