Jenny Farrell presents the third poem written by the poet-leaders of the Irish Easter Rebellion in 1916. It is Joseph Plunkett’s “Die Taube”, written in 1915.

Engagement with German literature was not unusual for the Irish revolutionary poets and leaders of the Easter Rising in 1916. One of the seven signatories of the Proclamation of the Irish Republic, Thomas MacDonagh, for example, translated Goethe’s famous “Wanderers Nachtlied” into English. It is an indication that the insurgents of 1916 were internationalists in their outlook.

Joseph Plunkett, the youngest of the signatories – all of whom were executed after the Rising by the British military – wrote the sonnet “Die Taube” on 4 March 1915.  This was just days before leaving Ireland on St. Patrick’s Day on a secret mission to Germany. He was to rendezvous with Roger Casement and convey a verbal message from the leadership of the Irish Volunteers. It is therefore a little surprising that Plunkett’s poem suggests he regards Germany at war as abhorrent.

The first clue to reading this poem as a comment on Germany is its title. This is striking, as Plunkett did not speak German. The title draws the reader’s attention to the likelihood that this poem refers to Germany. “Die Taube” means “the dove”, a bird that symbolises love and peace. The fact that Plunkett uses the dove to represent Germany is significant. It immediately suggests something positive. It is pointedly not the German eagle of victory and imperial power.

In addition to this, Plunkett composes a traditional love poem – a Petrarchan sonnet, comprising of the initial octet, rhyming abbaabba, which states the problem, and the concluding sestet rhyming cddcdc, resolving it.

To-day when I beheld you all alone
And might have stayed to speak, the watchful love
Leapt up within my heart, — then quick to prove
New strength, the fruit of sorrow you have sown
Sank in my stormy bosom like a stone
Nor dared to rise on flaming plumes above
Passionless winds, till you, O shining dove
Far from the range of wounding words had flown.

The speaker spots a single dove, addressing it familiarly as “you”. He establishes a personal relationship, “might have stayed to speak”, but “the watchful love” that springs up in the speaker’s heart prevents closeness that he would have welcomed otherwise. The entire poem is defined by this ambiguous feeling for Germany, a mood conveyed from the very beginning.

While the bird represents what he feels is good about Germany and therefore his love for it, the dove has sown “the fruit of sorrow”. Given the date, March 1915, nine months into World War I, this can only refer to the hostilities. However, sorrow does not destroy his love; “watchful” merely constrains it. Sorrow over Germany’s war has produced a tangible “fruit” that oppresses the speaker.

The speaker’s sorrow over Germany’s aggression “sinks” in his chest “like a stone”. In the past, Germany had clearly not burdened his heart. The phrase “stormy bosom” suggests turmoil and underlines the double-edged emotion. On the one hand, the speaker has a positive feeling towards Germany, but “sorrow” has gained the upper hand.

His “watchful love” did not dare to ignore the pillars of fire, the rising columns of smoke from burning cities that this war has brought to Europe. It does not dare to rise into the “passionless winds”, the neutral, uninvolved winds of Ireland, until the dove had flown away from the “wounding words” of war propaganda. In contrast to German literature, German war propaganda speaks in “wounding words”. The word “range” connotes a firing range as well as reach. There is no room for loving Germany while it is at war.

Plunkett’s phrase “O shining dove” underlines once more his affection for Germany, something he never loses sight of in the poem. Peace and anything good, worth loving in Germany, symbolised by the dove, has flown far away from Germany.

The poem’s concluding sestet comments on this predicament. The sestet divides into a quatrain and a concluding couplet:

Far have you flown, and blows of battle cease
To drape the skies in tapestries of blood,
Now sinks within my heart the heaving flood
And Love’s long-fluttering pinions I release,

Bidding them not return till blooms the bud
On olive branch, borne by the bird of peace.

The dove has flown to a place where skies are free from the blood of war - to Ireland, where the speaker resides. The speaker renews the image of a heaviness in his heart: “heaving flood” is a very physical image, as palpable as the fruit of sorrow, but even more forceful. A different kind of sensation is evoked, a repeated welling-up. The speaker lets go of the dove, releasing it. The beautiful, tactile adjective “long-fluttering” wings once more emphasises a long love for Germany.

In keeping with the sonnet form, the final two lines arrive at the conclusion. The dove is not to return until it brings peace. The image is both tangible and vivid: “till blooms the bud / On olive branch”. The line break enacts a momentary delay and builds up to the emphasis on “peace”, the last word of the poem. What the speaker loved about Germany is no longer there. He hopes it will return some day, but it cannot come back unless it brings peace. There can be no love on the basis of war.

This reading of Joseph Plunkett’s “Die Taube” reveals his very ambiguous feelings towards Germany at war, the place he was about to travel to. While using a traditional love poem form ironically, he makes his position abundantly clear that he has no illusions about the militarist nature of Germany at that time. There is no suggestion that fighting in this war is heroic. Plunkett was going on a peace mission of a different kind: one that he hoped would bring Ireland her independence from both King and Kaiser. 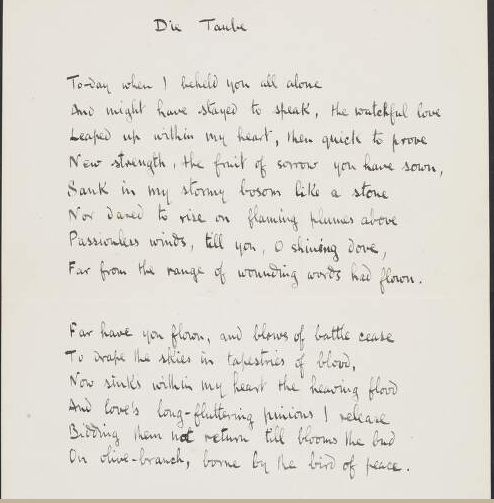