“I have begun to undertake the task of trying to establish a Paul Robeson month here at Marion Federal Penitentiary,” wrote Bil Brown-El. An incarcerated person in the medium security prison in rural Illinois, USA, Brown-El addressed his June 1977 letter to Tony Gittens, director of the Electric Playhouse in Washington D.C. Brown-El was aware of the film festivals held by Gittens in his hometown and hoped that, with the proper setting of his conditions, his humble request would be met favorably. He continued,

Beyond the need for more cultural opportunities at the prison for Black people, Brown-El argues that the answer to the question of why pursue this course is “very simple”: “Paul Robeson is one of America’s greatest men.” His use of the present verb tense, alongside his earlier frustration with those who “are ignorant to just who Paul Robeson is/was,” highlights that Paul had not left the world nor these precarious men, even a year and a half after his death. 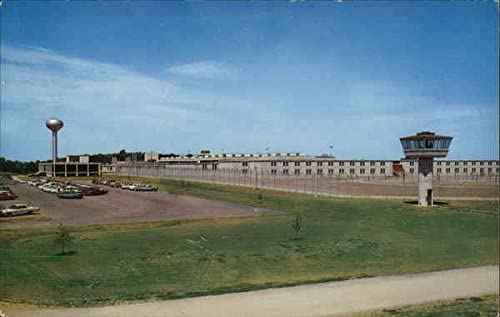 Prison may seem a surprising location in which to find the great singer, actor, and radical Paul Robeson (1898-1976) but he knew something of those people and conditions. Though never incarcerated himself, Robeson was the son of a formerly enslaved man who secured his freedom through escape from a North Carolina plantation. He also lived through eight years (1950-58) of detention in the United States when his passport was revoked due to his political labors and global solidarities. He spoke in support of the incarcerated Scottsboro Boys in 1935 and the Trenton Six in 1949, as well as his comrade Ben Davis, whose membership and activism in the Communist Party, USA was used to convict and imprison him under the Smith Act in that same year.

Robeson was passionately and vocally opposed to the conditions of economic dispossession and political repression that produce imprisonment within Black communities, all the while forwarding alternatives to that violence. And though it would be inaccurate to label Robeson an anti-prison activist, his commitments are aligned with the urgent calls from contemporary Black U.S. communities and organizers for prison abolition, which abolitionist geographer Ruth Wilson Gilmore describes as change that is “deliberately everything-ist” in its design and impact. It is then not a surprise that imprisoned people would seek Robeson out as Brown-El did, especially in the 1970s when incarceration in the U.S. was rapidly becoming the way to contain and disappear poverty and Black insurgency.

Though the proposed program at Marion Penitentiary was less spectacular and significantly less resourced than that which occurred in universities and museums all over the world, it was no less researched. Brown-El began his time with Robeson well before his communication with Gittens. While in solitary confinement at the United States Penitentiary in Lewisburg, Pennsylvania, he read “Paul Robeson: Farewell to a Fighter,” by Carlyle Douglas, a writer for Ebony magazine who covered Robeson’s 1976 memorial at Mother A.M.E. Church where his older brother Ben had pastored for more than twenty years. In it, Douglas describes the “knots of sombre people” who braved a rainy Harlem day to honour Robeson. Amongst the strangers and members of multiple former vanguards (“the old Harlem Writers Guild, the Old Left…”) were

ideologues whose visions he had shared and supported, there were people whose personal resolve had been strengthened by the example of his steel-hard integrity, and people who loved him because he sang of them and to them with a voice unmatched in its combination of technical mastery and natural beauty.

The Negro spirituals and world folk songs that define Robeson’s career were inspiration to hundreds of thousands of people or more, and include his famed “Didn’t My Lord Deliver Daniel,” which declares in verse two that “freedom shall be mine.” His unwavering belief in ultimate justice undoubtedly encouraged many to brave the weather and crowds in order to pay their last respects. Descriptions of the memorial were bookends to Robeson’s life, which Douglas covered in broad, yet thoughtful, strokes.

Like any good story, the highs and lows are dramatic and the lessons profound. Brown-El wrote to Douglas that since its reading he had “become conscious of self.” He went on to read Robeson’s Here I Stand (1958), which he later described as a book that fundamentally changed him: “after reading it, re-reading, and still reading it I realized that I have become addicted to Robeson-ism.” From this conversion developed a month-long program in honor of Robeson and an opportunity for Brown-El and his fellow men to continue responding to the world beyond their walls.

The “five[-]part affair” that Brown-El describes to Gittens, which was sponsored by The Black Culture Society (BCS) at Marion, included panels as well as guest speakers from Southern Illinois University, and culminated in a screening of Robeson’s 1933 breakout film, The Emperor Jones. Originally a play by Eugene O’Neill in which Robeson also starred, the film adapts the story of Brutus Jones, a Pullman porter convicted of murder who escapes imprisonment and ultimately finds himself on a fictitious Caribbean island where, through coercion and quick-wittedness, he becomes the leader of the local people.

Like the other examples of Depression-era Black performance studied by Stephanie Batiste, The Emperor Jones “shows that black culture also contained an aggressive current of desire for power.” The real-life evidence of this desire for power is precisely what drew scholar Michele Stephens’s attention to Pan-African icon Marcus Garvey, who she juxtaposes with the original O’Neill play.

Proclaiming himself the provisional President of Africa in 1920, Garvey, like Jones, used decorative opulence and pomp and circumstance to stabilize the legitimacy of his reign as leader of the Universal Negro Improvement Association and, by extension, the wider Black world. Both men would, however, fall victim to the “true tragedy” of the Negro emperor, which included a failure to use his power to sustain meaningful collectivity beyond the nation and, according to Stephens,

[e]ven more dangerously, his transnationalism spoke most powerfully to a specific segment of the black American population, the group least likely to find social acceptance and the rights of full citizenship in American and, therefore, the group least interested in their cultural Americanization, the black working poor.

The choice of The Emperor Jones as a capstone event for the BCS Paul Robeson Month comes into sharper focus within this context. Seeing a Black man successfully flee, capture and seize his freedom, must have been compelling for those at Marion, yet it is precisely the group that Stephens mentions here who Brown-El envisioned as he planned the screening. They were not simply caged men; they were the Black and working poor, the most shunned and despised of society, the least likely to access their full citizenship rights, and, therefore, those critically attuned to the contradictory national logics exposed by Black performance, which, Batiste argues, “shows African Americans coming to terms with a nation that had both betrayed them and from its foundational creed continually held out the glimmer of a promise of inclusion.” Brutus Jones modeled this condition, perhaps most especially in the fit of madness into which he descends at the film’s end that is catalyzed both by his lifetime of dispossession and his struggle to achieve what he was told could be his.

Though ending with a cautionary note for Black men to not aspire too far above their given social station, the narrative of The Emperor Jones was, like so much of Robeson’s early film portrayals, offset by the life lived by its star. By the time of the film’s viewing at Marion the story of Paul’s life had been told with a clarity that undoubtedly brought nuance to this portrayal and invited further consideration of his unique role in a nation that was, at this very moment, escalating the disappearance of its Black citizens into carceral dungeons. Over the last few months of 1977, Brown-El used his personal interest in and research of Robeson to launch efforts to advance the musician’s name as well as other struggles for social justice.

As a part of Paul Robeson Month, the BCS developed a “Black Awareness Quiz.” Composed of eight questions in multiple-choice style, it asked the reader to answer, for example, “Which noted American became a target of McCarthyism?” and “Which man was honored with the Spingarn Medal, awarded annually for the highest achievement of an American Negro?” The answer to each question was, of course, Paul Robeson, making for a game that was, by question three or four, very predictable but successful nonetheless in its effort to increase knowledge of the month’s namesake. This quick snapshot of both his persecution and his victories began to develop a shared investment in Robeson’s preservation and protection amongst the BCS and their audiences.

Brown-El took advantage of the critical mass that he created through his programming and curatorial work by using it to join in the outrage over the Philip Dean Hayes play Paul Robeson, which premiered in September 1977. Organizing against the play was widespread yet its reach into a federal prison opens up an underdeveloped and undisclosed avenue for solidarity. In the December “petition in support of the actions of the Washington, D.C. Committee to End the Crimes Against Paul Robeson (from Marion),” more than twenty signatories announced their alliance with the celebrities and intellectuals, including Paul Robeson Jr. and writer James Baldwin, who organized the national boycott of the play. The Marion signatories wrote,

This petition is addressed to all people who are concerned with the deplorable assault, “the pernicious perversion of the essence of Paul Robeson” by the farcical play entitled “Paul Robeson” which pretends to depict the life of this heroic giant as it really was. In essence, this unwholesome manure of a play, actually reduces Mount Kilmanjaro [sic] (Paul Robeson) to an insignificant molehill. We, the petitioners, protest.

This is a fantastic document that is not simply additive to the international campaign against the play but revelatory in its own right. Beyond this opening, it goes on to paraphrase Lenin and expose the play as “bourgeois propaganda”, used in service of the long historical practice of making Black revolutionaries small. From these insights and reading practices, we know that these men are dynamically and proactively engaged with events beyond the penitentiary—not simply large-scale national or international events but those that intimately impact the communities in which they continue to love and labour. We know that even though they’ve not seen the play, they’ve read and heard enough about it to have an opinion on its failures and to know that they are joining a collective with the power to adjust current conditions. We know that these men, “the petitioners,” are self-possessed enough to protest and they do it from the prison in the name of Paul Robeson.

In his letter of appreciation to Paul Robeson, Jr., Brown-El outlines his labours for the elder Robeson, including the petition, the film screening, and an additional event on December 1, which he planned to repeat in February 1978. Paul was quickly becoming a recurring presence at Marion—a member of their community and one that they would vigorously defend. Brown-El commits to Paul, Jr. that, “I shall propagate the Great Paul Robeson whenever, however, and wherever I can as there was none greater, there is none greater and there shall be none greater than he…”

The persistence of Robeson’s attendance and influence was made possible not only by the gravity and significance of his labours during his lifetime but also due to the impressions that they would make, even if temporary, at places like Marion Penitentiary. He remained with those vulnerable men and remains with us still, singing and charting new forms of possibility and escape.

Shana L. Redmond is the author of Everything Man: The Form and Function of Paul Robeson (Duke UP, January 2020) and Anthem: Social Movements and the Sound of Solidarity in the African Diaspora (NYU Press, 2014).